The Politics of Science & the Harper Government by Craig Carter Edwards – July 23, 2012 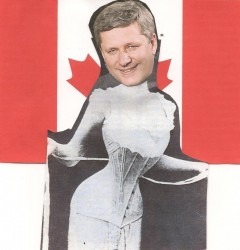 It’s Latin for “now I know in part” and is the motto of Trent University, where I received the last of my institutional education.  It’s a great slogan, because it alludes to the fact we will never know the sum total of everything.  Fundamentally, omniscience is a dichotomy paradox.  Of course this isn’t a very appealing concept.  We interpret our world through cognitive frames like memories, words, symbols, affiliations – without these closed-box definitions, how could we ever comprehend and communicate our world?  Black and white must have the same meaning for everyone, just as the definition of left and right must be universal to be discussed.

But that’s philosophy – this article is about science and politics.  Science is a systematic tool we clever human beings have devised to expand and test our knowledge of the world, then find more accurate ways of communicating that knowledge.  We start with observations (the apple falls from the tree, the ship appears to sink into water the further away it sails) and then build theories to explain these observations.  The more knowledge we have that supports our suppositions, the more comfortable we become in the validity of our theories.  It’s nice to be validated and it’s comfortable to know someone has an answer – that’s why we have subject-matter experts in the first place.  If you’re sick, you want the confidence of a doctor who can ascertain your problem and prescribe a solution.  If you’re looking to invest, you want the confidence of proven commodities to invest in – and there are experts who make their money by selling knowing of those variables.  The same holds true in politics or business; we want the comfort of believing our leaders confidently know where they are taking us.

Knowing, however, is only half the battle.  Knowledge has to be tested; if we consciously realize our base-knowledge is never complete, it makes sense to question whether the answers arrived at thus far are sufficient.  My favourite definition of science (and there are many) comes from the physicist Richard Feynman: “science is the belief in the ignorance of the experts.”  There were times when the “experts” told us that the Biblical description of creation was 100% accurate and that the world was flat; through vigorous scientific query, both these beliefs have been challenged.

This same principle applies to courtroom justice.  You cannot make a rational, balanced judgment unless you have all the facts; failing that, you make the best determination you can based on the information you have at the time.  It’s one of the key arguments against capital punishment.  Incidentally, the same rule applies to politics; you will always have stakeholders arguing for and against any policy decision, say funding for refugee healthcare.  That’s actually the whole point of parliamentary democracy.  In theory, different Parties representing different constituency viewpoints will debate their positions in a Socratic way; whoever does the best job arguing their case will have earned the confidence of the majority of the electorate, as determined through electoral voting.   Those who eke out opposition status will provide a balance of opinion within Parliament.

Of course, politics isn’t about seeking compromise solutions that reflect the collective will of an electorate; it’s about winning majorities to implement partisan agendas.  Between elections, Parties will strategically pursue issues in ways they feel enhance their support to the detriment of opponents.  They will nurture allies that favour their causes, employ propaganda and wage “hearts and minds” campaigns.  More like warfare then scientific debate, politics seeks to undermine confidence in adversaries through personal attacks and narrow public focus to just the issues that resonate with their themes.  Understanding is entirely secondary.  That’s why political operatives are so keen to define “the ballot question”; it’s less about what people care about and more about what issues give the best political traction.

The upcoming US election provides a case in point.  Does it matter that Obama went to a church with a radical pastor, or is he really a Christian at all?  Does Mitt Romney despise poor people and did he tie his dog to his car roof?  If you undermine the character and credibility of the man, you cast doubt on anything he has to say, whether it’s factual or not.  The corollary to undermining your opponent and targeting niche issues is promoting the concept that you have the definitive answers.  Is the election about the economy, or income inequality?  Only Obama can achieve income equality.  Only Romney can fix the US economy. What about the viability of the US education system, the new Digital Government strategy, the challenges of energy security or threats from foreign countries?  All are relevant to the electorate, but the Dems and GOP want you focused strictly on the issues that fit within their message frames.  To issues beyond those frames, Parties will tell you “so what?” and direct you back to what they think you should know.

Canada’s current master of political positioning is Prime Minister Stephen Harper.  From targeting subsidized political funding to suggesting coalitions were illegal to promoting a “tough on crime” agenda, Harper has carefully crafted every tactic to benefit his Party.  Harper successfully defined his Liberal opponents as untrustworthy.  The Harper Conservatives have also systematically removed information that could be detrimental to their cause from the public discourse; the media has had limited access, the Census has been gutted, government officials who challenge Conservative messaging have been silenced, Tory MPs who dare to voice independent opinions are quickly brought back in line.  Opposition Members have seen their access to information significantly reduced; even Harper’s appointed Parliamentary Budget Officer is being denied the data he needs to do his job and been derided for seeking it.  The Conservative government has actively lied to the public and disparaged anyone who challenged their political framing.

Harper’s careful partisan game has extended beyond the reach of politics.  Through careful micro-targeting, the Conservative Party has ensured individual voters are exposed to just the information that’s directly relevant to them.  External actors (environmental activists, human rights advocates, etc.) have seen their credibility attacked by the Conservatives and allies; issues that might be of concern to Canadians but don’t fit within Harper’s frame have been dismissed as dubious.  Now, scientists are protesting against the Harper government’s attack on evidence.  Unidentified officials within government (you can’t attack the credibility of an unidentified agent) are telling us no, scientific funding has been increased, but it’s being applied to more commercial applications.  Criticisms that the Conservatives are really trying to reduce evidence that counters their focus on natural resource extraction for economic gain or ignoring human rights concerns in Europe and elsewhere are being belittled as rubbish.  The Conservatives and their experts have all the answers – we need only listen to them.

I pick on Team Harper because they’re government, but they’re hardly the only Party guilty of crass politics.  They’re simply the most effective at pulling the strings for partisan benefit.  While Harper’s approach is effective politics in the short term, this strict adherence to information control is resulting in some pretty limited policy and an increasingly frustrated populace.  The people have been told not to trust anyone other than the Conservatives, but the resulting intense scrutiny has brought out one confidence-shaking scandal after another.  When we don’t trust anyone, people give up on evidence and debate, instead going with what feels right.  This is why there has been a steady increase in irrational anger the longer Stephen Harper has been in power.  It’s not a healthy trend for any of us and presents a different way of looking at a little knowledge being a dangerous thing.

Don’t agree with me?  Great – sound off in the comments.  Research any piece I’ve mentioned that you’ve questioned and please, make a point of looking for arguments for and against.  It’s through the debate that we’ll all learn and maybe even land on solutions.  If you’re insistent on throwing down an insult or two, knock yourself out, but it doesn’t do anything to me and really doesn’t move the conversation forward.  You’ll get out what you’re willing to put in.

There are lots of other topics out there I will write about, but I’m really interested to see what you, dear reader, would like to cover.  Feel free to drop any suggestions in the comments – let’s see where conversation leads us.

3 Responses to "The Politics of Science & the Harper Government by Craig Carter Edwards – July 23, 2012"