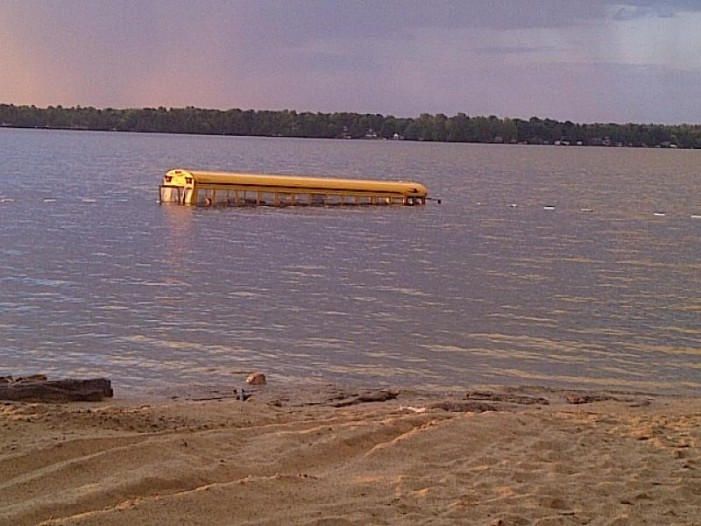 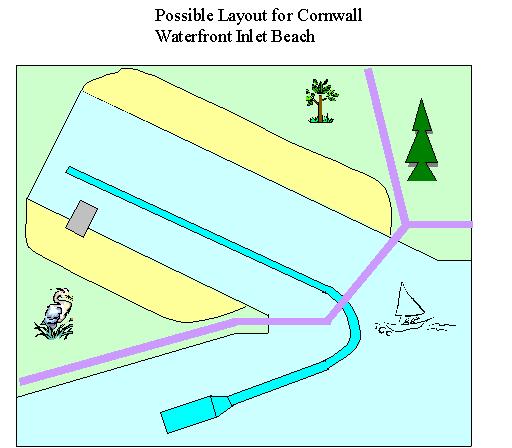 Since the discussion about a possible beach along Cornwall’s waterfront began, numerous people have aired their veiwpoints that support and oppose a beach along Cornwall’s waterfront. The combination of a new boat ramp at the little inlet behind the RCAF building and the waterfowl situation may discourage the development of a beach at the little inlet. There are other possibilities for a beach location and citisens will ultimately have to voice their sentiments to either support or reject an alternate beach proposal. Some citizens have suggested a possible swim area at the inlet along the east side of St Lawrence College. It is possible to use a sumerged water pipe to divert a small volume of water current from the St Lawrence River to continually exchange water in the little inlet. Given the close proximity of the inlet to St Lawrence College, perhaps the question needs to be asked as to whether the college athletics department would have any interest in managing an outdoor swim area located right next to the college.
.
With regard to building breakwaters along the North Channel of the St Lawrence River, a representative from the Environmental Department of the Mohawk Council of Akwesasne has requested that the river flow characteristics remain unchanged. So a beach located downstream of a breakwater would not be an option.
.
Cornwall could examine a beach precedent in the southern area of Ottawa, at Mooney’s Bay on the Rideau River/Canal that was originally developed by Colonel John By. Parks Canada manages major sections of the Rideau Canal and River. The beach at Mooney’s Bay in Ottawa is right next to a navigation passage. We have a canal at Cornwall that is subject to management by the Federal Government. Every summer, groups of teenagers dive into the west section of the Cornwall Canal and swim there. Despite the absence of lifeguards, the teenagers who swim in and dive into the old canal have a good water safety record.
.
The canal is no longer navigable and water flow rate has been reduced just enough to sustain the brook and fish spawning area at the EcoPark near the RCAF building. Originally built to a depth of 9-feet, it was deepened to between 14 and 16-feet to transit larger vessels. Federal authorities willing, there may be scope to reduce water depth along a designated section of the Cornwall Canal, and convert it into an outdoor summer recreation area. The water current is gentle and the water quality may be sightly cleaner in terms of bacteria count, than the water at the beaches at Long Sault.
.
The excess choloform bacteria in the river may originally have originated from the Bird Sanctuary located west of Ingleside. The river current flows from the bird sanctuary to the beach at Ingleside, then to the beaches at Long Sault. When the current moves into Lake St Lawrence, the UVA solar spectrum shines on the river water and may actually kill off a percentage of that bacteria. Many water filtration plants also use UVA radiation of kill water-borne bacteria prior to the water being distributed to the population.
.
It may be technically possible to install UV technology in the the pipe through which water flows from Lake St Lawrence into the Cornwall Canal. to kill off bacteria. During summer, this would result in water in the Cornwall Canal actually being a little cleaner that the beach water at Long Sault and Ingleside. When the health authorities close the beaches at Ingleside and Long Sault due to high bacteria count, the water in the Cornwall Canal may actually have a low enough bacteria count to allow for swimming.
.
There will have to be further discussion in regard to developing a possible beach along a section of the old Cornwall Canal, where water depth has been reduced.
.