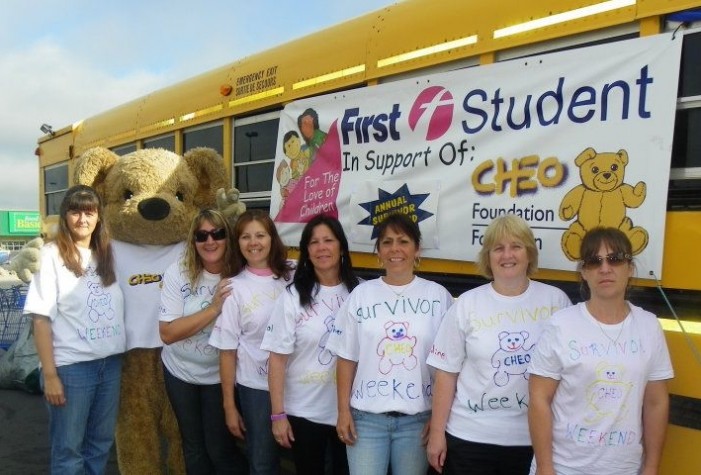 CFN –   People in Cornwall Ontario have always been huge supporters of The Children’s Hospital of Ontario (CHEO) and for 11 years First Student bus drivers have been fundraising for them.

The big yearly fund raiser, called their Survivor event,  has been held in the Cornwall Walmart parking lot on Brookdale.  From Friday night to Sunday in September bus drivers, in one of their school buses, camp out and collect thousands of dollars each year.  Last year they raised over $10,000 for the charity alone which goes a long way helping children deal with trauma and illness.

This year Walmart has refused to allow the group to continue.  With a  scant few weeks until the scheduled event the group is scrambling to not only find another location, but of course the issue is then how to get the public at large to know that they’ve moved!

The group is boggled as the volunteer bus drivers during the event spend money in Walmart and the group has supported the store as well.   Walmart has a universal chain policy of allowing campers to park over night which makes the decision by the local store and their landlord CREIT even more boggling?

The store, rumored to cash in on the community to the tune of over $80M per year seems to be playing Grinch and jeopardizing the fund raising for one of the most worth while charities and causes in Canada!

CREIT management L.P. apparently has just implemented a policy to not permit the staging of any events across all of their properties.

Some of the reasons given were potential for disruptions and disturbances, use of parking spaces that otherwise would be used by customers, unsightly banners and signage, and liability claims which the volunteers said makes no sense as they have $5M of liability coverage and a long history of nothing but positive results from their 11 years of fund raising?

I spoke with Sharon Amell at the Cornwall Walmart store who refused to answer or comment other than saying that it was a decision by their landlord CREIT who did not answer their phones nor return our missive to them as of press time.

Personally I think if Walmart and CREIT are going to be CREEPS  and refuse to allow the group and the community to support CHEO they should scratch a cheque for $10,000 each for this year.

But mostly I’m totally proud that I live in a community where those that give so much to children every day shuttling them from home to school and back still find time to give and that this amazing community responds as strongly as it has for 11 years.

Hopefully they’ll be rewarded by even more money this year one way or the other.

What do you think Viewers of  Cornwall Free News?  Is Walmart & CREIT being Corporate Child Hating Monsters?   Should they allow them to at least do this year’s event giving First Student’s amazing volunteers a year to find a new location?

This reminds me of the case last year where a shopping centre in Lasalle Quebec tried to refuse the Legion to sell poppies.  Hopefully the public protest works as well for this group as the backlash did for the Legion!

You can post your comments below, and we’d also like to hear some of that amazing stories of the work that CHEO has done in Cornwall and right across this region.