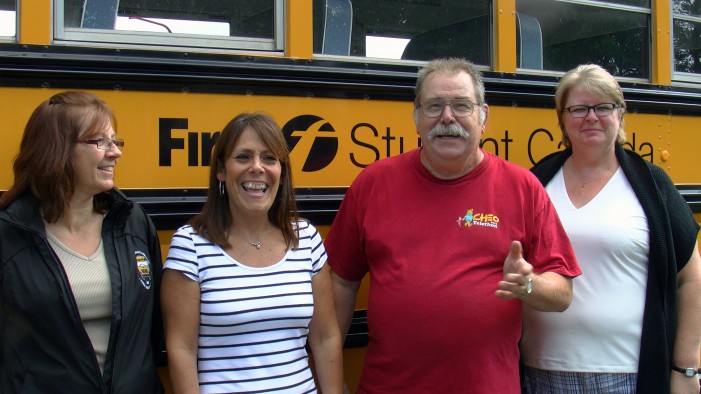 CFN – Happy Day at the Cornwall Ontario First Student offices as volunteers rejoiced at the change of heart by CREIT.   The group will be able to do their Survivor Fundraiser this September 21-23.

Last week we reported that the group’s 12th Annual event was kiboshed, but Wal-Mart & CREIT must have had a change of heart that will allow the group to try and break their record set last year.

Mr. Tony Wilson, VP at First Student had the following to say:

First Student is both thankful and grateful for our friends and partners at Wal-Mart.  We are very pleased to report that our Survivor Bus Event will take place at its usual home from Friday evening September 21st through late afternoon Sunday September 23rd.  We look forward to greeting our friends from the Cornwall community and raising some cash for the amazing kids and families who need CHEO.

Mr. Wilson in an email to CFN also stated that he was hoping to be in Cornwall to help support the cause!   The group was buoyed by an offer from the local Baxtrom’s Your Independent store as a potential replacement site, but were ecstatic to be back where they’ve been for 11 years!

Now the challenge is to raise lots of money for the Children’s Hospital of Eastern Ontario!

I chatted at lunch at Moustache Joe’s with driver Krista Primeau.   The Prime Rib panini was awesome!   We talked about the impact on local communities via Social Media like Facebook which triggered this story.

First Students Survivor Fund Raiser for CHEO BACK ON at Wal-Mart in Cornwall Ontario After a Change of Heart added by admin on September 5, 2012
View all posts by admin →