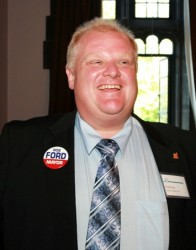 CFN – I know.  It’s going to take some Herculean magic for Mayor Rob Ford to continue in Toronto.  Another case of another arrogant politician making up the rules as he goes and sees fit.

There are so many Rob Ford’isms it’s astonishing to realize that Toronto in its wisdom actually elected this gentleman in spite of his antics.

It’s almost as though he was playing by Cornwall Rulz.

The Mayor had an out in his case.  He had a chance be further sunk his boat by actually voting on an issue of conflict of interest he was involved in.

Imagine?   I’d love to see video tape of that meeting!

As the Municipal act states: LINK

So what do you think?  Will Mayor Ford find a loophole to save the day?  Even if he does do you think he still deserves the confidence of the electorate of Toronto?

Do you think the Municipal Act needs to be cleaned up so that Mayors and Council can be held accountable for their antics without having to wait for the next election?

Will Toronto Mayor Rob Ford Resign Over Conflict of Interest Scandal? added by admin on September 6, 2012
View all posts by admin →

10 Responses to "Will Toronto Mayor Rob Ford Resign Over Conflict of Interest Scandal?"