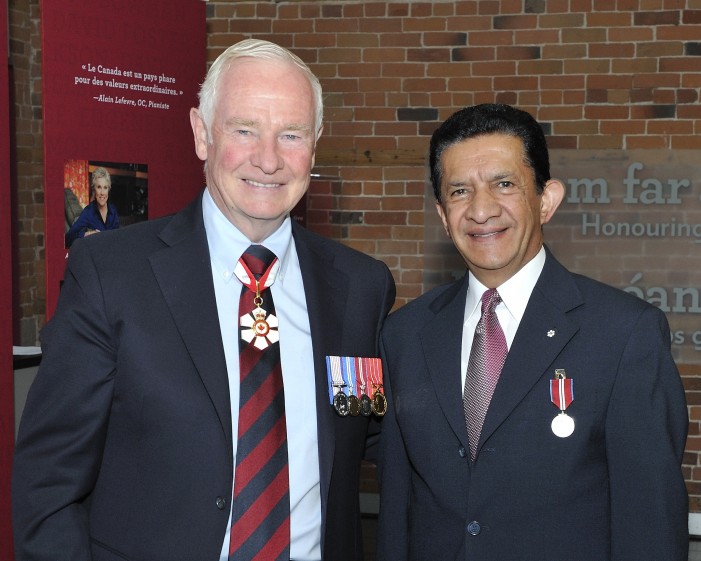 Awards were presented to 35 Canadians at a Special ceremony in Ottawa.

This medal, specially created to mark the 60th anniversary of Queen Elizabeth II, was presented to Sultan for his significant achievements and remarkable services.

He was particularly recognized for his outstanding fundraising abilities and leadership to numerous organizations.

“It is quite an honour to receive all three medals,” said Jessa, who received the Order of Canada, the country’s most prestigious and highest civilian order for 35 years of community service. “It encourages you to continue to help others. You don’t seek recognition, but it’s heartwarming when the work you do is appreciated.”

The Governor-General said recipients were being recognized for their service to Canada.

“You are respected in your field, you give back to your community, you are esteemed by your peers, and many of you have been recognized in one way or another.”

Johnston said recipients of the medal have contributed so much to Canada.

“You have strengthened our nation and as a result, it is a smarter, more caring place.”  he added.

This award is a symbol of constancy and loyalty, yes, but also a symbol of service and collaboration. And so I give you this message today: reach out to others and share your success.”

In 2010, Sultan was selected as Canada’s top 25 immigrants. This award is given to people who have succeeded in Canada, and have made a difference in their adopted country.

Born in Tanzania, Sultan is the former editor and publisher of Northern News and worked for several newspapers and periodicals including the Nationalist and the Standard in Tanzania and Kenya’s Daily and Sunday Nation.

He migrated to Canada in 1973 and started working for Standard-Freeholder.

Six years after arriving in Canada, he was made Citizen of the Year of Cornwall, Ontario.