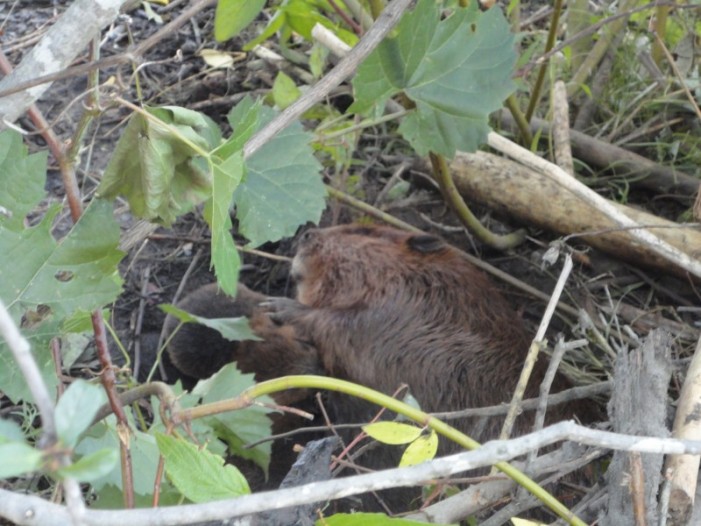 Mayor Jim Watson, the City of Ottawa and the Ministry of Natural Resources (MNR) decided last week to ‘relocate’ Lily and her two kits, the beavers who had been residing at the Paul Lindsay Park Pond since last summer. This ‘relocation’ seems somewhat suspicious due to the clandestine nature of how it was conducted, occurring in the dark of night and wee hours of the morning. There was virtually no community or media involvement, which surprises me for such a high profile case such as this. I wonder, if everything was as legitimate as the Mayor claims, then why not include a community member as a witness and inform the media of the wonderful deed that you are performing? Doing so would certainly go a long way to building community relations and make for great PR and press for the Mayor!

And why relocate so late in the season? Lily will need to build a new lodge and store a cache of food for herself and her kits before winter sets in, without help from her mate Lucky who mysteriously disappeared when the City destroyed their lodge late last June. Why not let them winter at the pond and relocate on their own come spring when the drought is over and water levels have returned to normal?

Why would the City turn down the opportunity to relocate the beaver to the Aspen Valley Wildlife Sanctuary in Rousseau, where they would have been monitored, with transitional care? This was an option, but the MNR claimed “it was out of their jurisdiction”.

The Mayor and his staff felt that ‘relocation’ one month before winter begins would be a good idea, that this was the “window of opportunity”, despite numerous emails and data that stated differently. The Mayor and City staff would like the public to believe that the beaver were living in a culvert, when in fact, Lily had managed to build a small lodge, not as nice as the first one that the City destroyed, but a lodge nevertheless, and they would have been better off wintering there, than having to start all over again in a new location, with only one month to prepare before winter sets in. Relocation at this time means almost certain death for the beaver. Lily on her own will frantically try to build a shelter, forage for food, defend territory, fight off predators and take care of her babies. Mortality rates for young kits that are relocated are 100%. Predators are the largest cause of death, especially when there is not an established shelter or lodge.

The Mayor is putting a lot of emphasis on the fact that the MNR authorized this relocation. According to the MNR’s own website, they state that “Ontario is considered one of the world’s leading suppliers of wild fur.” Not sure about anyone else, but this statement doesn’t exactly give me a lot of confidence in the MNR

In my own correspondence with Mayor Watson, I have posed some  specific questions,   none of which have been addressed. Most have been mentioned within this letter. I have received the typical ‘form letter’ reply, some with photos attached. The photos are lovely,    but they do not answer any of my queries. The letters and photos are meant to pacify, but those of us asking questions don’t need to be pacified, we need the truth!

We have no reason to trust the Mayor and City staff.  That they destroyed the beavers’ first lodge and provided misinformation about this act, and then covertly relocated them with no involvement from the community or media, makes us question what they have to hide.

The City of Ottawa desperately needs a Wildlife Strategy that is humane, progressive and respectful of all wildlife. Conibear traps are still used when trapping and they are anything but humane! Beaver baffles and flow devices can be implemented where beavers dwell. There are always humane options to consider when managing the wildlife around us. We are the ones encroaching on the habitats of wildlife. We are the ones who need to learn to adapt, to live with the animals in our environment, instead of the ‘shoot, shovel, and shut up’ methods that are being questioned by numerous concerned residents of Ottawa and other cities.

Letter to the Editor – Liz Craik Not Happy with Ottawa Decision to Move Lily & her Kits – BEAVER added by admin on September 13, 2012
View all posts by admin →