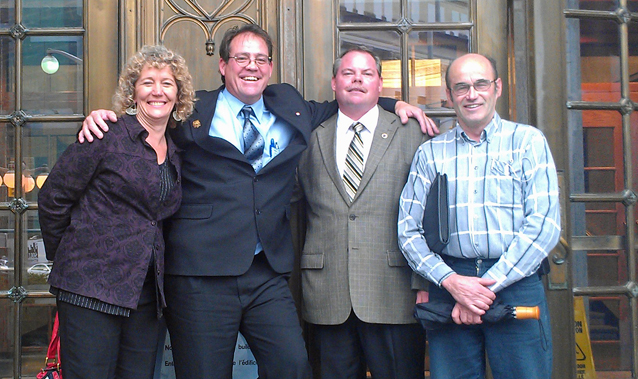 In the words of meeting participant Beth Trudeau:

“He [Moore] confirmed that EVERY level of government has the right to make language laws. He said he KNEW it wasn’t working, not once, not twice, but THREE TIMES! He said it is trial and error and said he is basically in a no win situation, to which I asked WHY even have language laws, which infringe on our right to Freedom of Speech. He responded that we need those laws so that Francophones can get service in their language.”

Tuesday’s meeting came about as a direct result of an “Act of Activism” by the local Language Fairness for All and Ottawa-based Canadians for Language Fairness last May, as detailed in CFN’s exclusive report. In spite of plans which were well-publicized on social media, demonstrators caught Moore and M.P. Guy Lauzon quite off-guard by their presence outside the May 30th Conservative fundraiser at the Chesterville Legion at which Moore was the keynote speaker. Tuesday’s meeting in Ottawa was the fulfilment of a promise made by Moore at that time to meet privately with the groups prior to the summer Parliamentary break to hear and address their concerns away from news cameras.  Lauzon attended Tuesday’s meeting, but reportedly had little to say.

South Stormont Mayor Bryan McGillis explained to Moore how Cornwall and area is disadvantaged by the loss of its youth who are forced to leave the area simply because they are not bilingual. McGillis also spoke of how provincial institutions hire outside of the province to fill Cornwall area jobs. Additionally, he addressed the loss of freedom of speech in Russell Township (Galganov and Brisson vs Russell Township) & showed Moore a stack of more than 200 e-mail messages received from concerned citizens, saying that tensions are at a boiling point.

McGillis believes that there are more pressing priorities that the billions of dollars spent annually promoting official bilingualism could be put towards, such as addressing the economy, outdated infrastructure, health care, education and the needs of our seniors. On the matter of Cornwall Community Hospital’s preferential treatment of Francophones with regard to hiring and promotions practices, the South Stormont Mayor told us that twice Moore agreed with him that: “this is not right!”  Speaking out against language discrimination in all forms, in McGillis’ own words, is “a no brainer.”

LFA’s Chris Cameron reports that he advised Moore of his desire to have representatives of other language rights groups from across the country participate in their dialogue. Although a date has yet to be set, Moore agreed that he and his team would meet with such a group.

Referring to M.P. Guy Lauzon’s statement that, in the Cornwall area, the Canadian government has filled more than 60% of government jobs with bilingual applicants, Cameron voiced concern that Cornwall Francophones claim to comprise 22% of the local population and are therefore disproportionally and unfairly represented in the job market. Cameron called for hiring practices to be brought in line with representation by population. He was referred to Minister Clement.

Jean-Serge Brisson asked Moore if all government language tests are equal; Brisson was assured that they are. Brisson further inquired of Moore if the English and French language tests are of equal difficulty. Moore wasn’t so sure about that, recommending that the group meet with Treasury Board President, Minister Tony Clement.

In response to Moore’s statement that the federal government is only promoting bilingualism in areas where it makes sense (“where numbers warrant”), Beth Trudeau had this to say:

“I challenged him [Moore] and asked about the report on Sun News’ Byline Monday night, where Brian Lilley showed Graham Fraser’s latest report, where various cities are identified as being on the Czar’s list of places to force bilingualism ‘Where numbers warrant’! How does Newfoundland, where 0.2% (that’s right, 0.2%) are Francophones, manage to get on their list of ‘where numbers warrant’? Moore asked where Lilley got his numbers from, because he wasn’t aware of it.”

Trudeau was referring to a political commentary in which Sun News’ Brian Lilley was worked up about what he referred to as a federal government “push for the Trudeaupian vision of bilingualism.” In case you missed his Byline commentary, it’s here in the archive.

In late May, Minister Moore launched the first in a series of Government of Canada pan-Canadian consultations on official languages. There is also an online questionnaire which anyone may complete. In his Lilley Pad blog Monday, Brian Lilley strongly encouraged all Canadians to participate in Minister Moore’s online questionnaire which can be found here.

Some would say that the questions are biased or leading in that there seems to be an assumption that all Canadians are in favour of imposed bilingualism and that it will happen regardless of the will of the good people of Canada. Whether or not you agree with the current governmental approach, please do take a few minutes to participate, wording your responses accordingly.

On the government website, the questions are presented one at a time, with the reader seeing the next question only after answering the current one. In order that CFN readers may have an opportunity to ponder their written responses, we’re re-posting the five questions here. Each of the five responses is limited to 1,500 characters.

1.) What are issues that should be prioritized in order to promote linguistic duality and raise Canadians’ awareness on the advantages and benefits of our two official languages?

2.) What are issues that should be prioritized in order to contribute to the social, economic and cultural vitality of official language minority communities?

3.) What are the challenges associated with improving quality of services and access to services (e.g., health, justice, education, immigration) in the minority language within minority communities?

4.) How can we ensure an increased efficiency in the delivery of programs dedicated to official languages?

5.) In your opinion, how can we ensure a more direct impact of our investment to citizens?

Here at Cornwall Free News, everyone has the opportunity to have their voice heard. As always, readers are welcome to enter into meaningful dialogue by posting comments below. Without a doubt, this is an issue that many are passionate about, but please make our moderator’s life a bit easier by addressing the issues rather than descending into personal attacks against others who post comments.

And, please do let our government officials know where you stand on this matter by completing the survey as well as by any other appropriate means, such as by your presence in the gallery at the South Stormont Council Meeting on September 26th. Council is expected to vote on a precedent-setting language rights resolution put forth by human rights activist Howard Galganov. Details are available here.