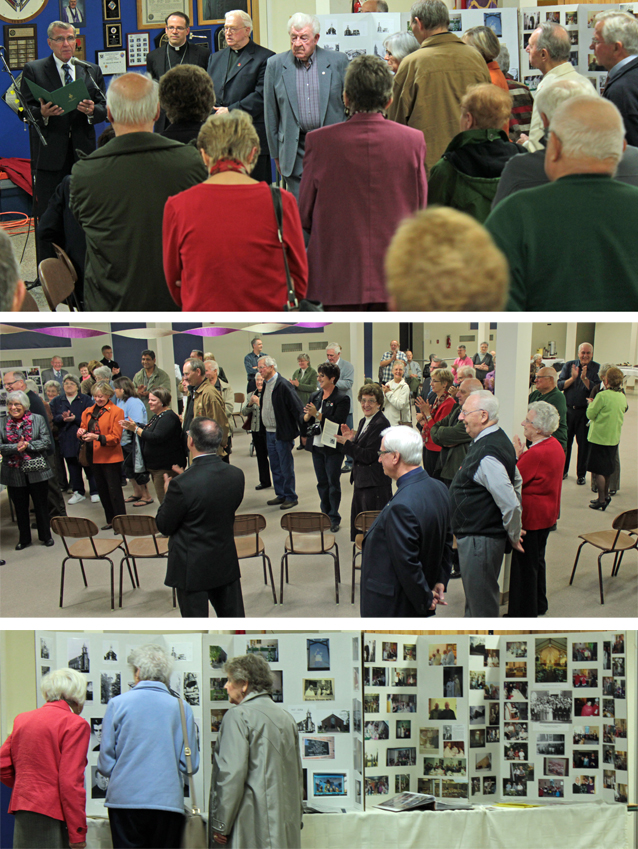 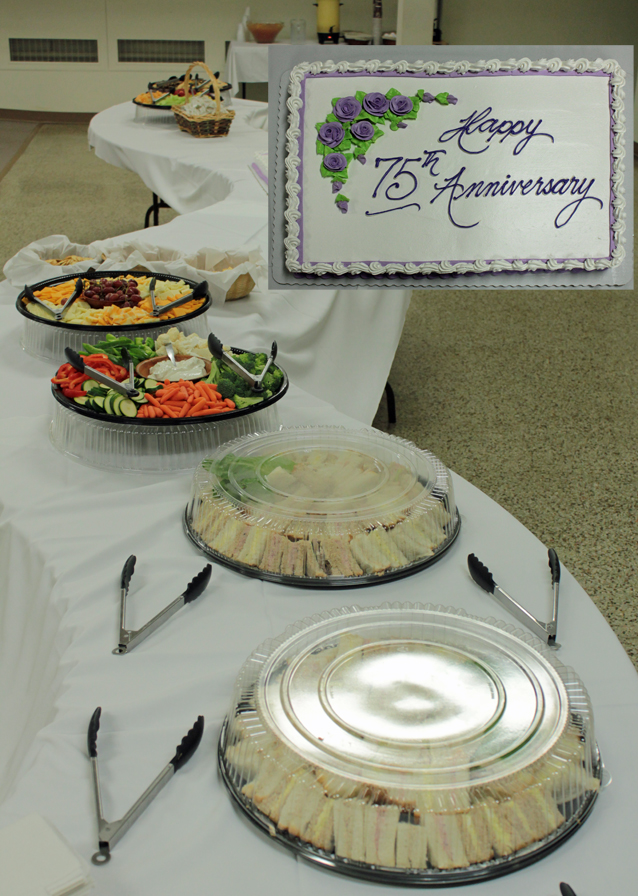 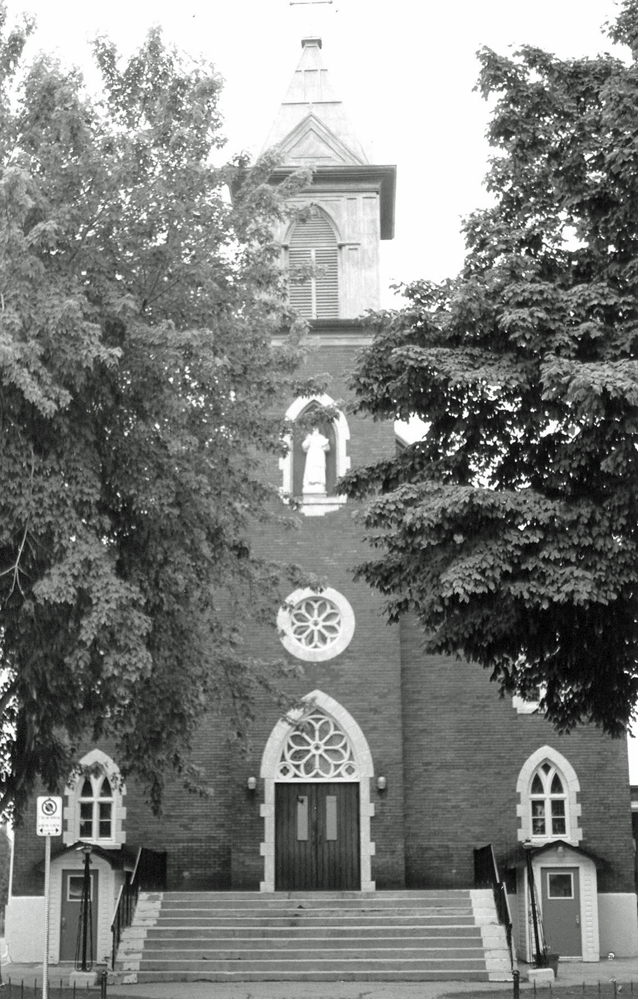 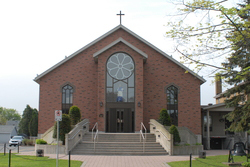 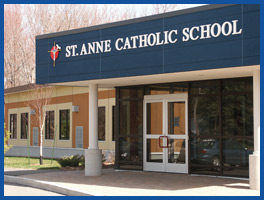 A History of St. Francis de Sales Parish
The church is located just west of Cornwall’s original mile square. Prior to the establishment of St. Francis de Sales parish in 1937 and the construction of the Church on Second Street West in Cornwall, a chapel served the needs of the area for a number of years. The chapel was built in the early 1920s by Monsignor George Corbet of St. Columban’s Parish on a lot at the southeast corner of Brookdale and Water Streets, an area considered to be quite rural as Brookdale was a sparsely unpaved pathway at that time. Father Baker and Father Alex Cameron, later pastor of St. Columban’s, were among the priests who presided at Mass on Sundays throughout the year.

In the early 1930’s, the Chapel was handed over to the care of the priests of Nativity parish, as more and more French speaking Catholic families were moving to the West end of Cornwall to work in the expanding Howard Smith Paper Mill. Father Adalbert Lalonde (later chaplain at the Hotel Dieu Hospital) was one of the priests who presided at Mass each Sunday at the Chapel. The need for a regular parish Church became evident with the expansion of the Laflecheville area, north of Second Street, and the opening up of the Riverdale area for development.

ln the spring of 1936, the Chancellor, Monsignor William J. Smith, on order from Bishop Felix Couturier, mandated Father Azelius Brunelle, at that time assistant at Nativity Parish, to become founding pastor of the new bilingual parish of St. Francis de Sales. There was not enough French speaking families toform a viable all-French parish. The area to be served was the population west of Cumberland and later included the French speaking Catholic population west of Pitt Street.

The Parish Committee, composed of Father Brunelle, Joseph Emard, Joseph Delisle, Victor Lemieux and Vincent Fraser, recommended the purchase of the Smith property which included a residence just west of the proposed site of the new Church. On February 20, 1937, Father Brunelle assumed his duties as pastor residing in the Smith residence which served as a rectory until 1956 when a new rectory was built on the same site by Monsignor Albert Goulet.

The tender of John Drouin of $15,000.00 was accepted for the construction of the Church. The Chapel property was sold to Mr. V. Fraser for $1,250.00 and the parish negotiated a loan of $26,000.00 for the construction and furnishing of the church. The first caretaker was George Leroux who was hired at a salary of $10.00 per week. ln 1944, the section of the parish north of Seventh Street was absorbed by the newly formed parish of St. John Bosco.

St. Francis de Sales for many years was a truly bilingual parish with both English and French organizations such as the Ladies of Ste-Anne, the J.O.C. (for young workers), the West Section of the French Canadian Women’s Federation (F.F.C.F.), the Boy Scouts, the Girl Guides, the Brownies, the Catholic Women’s League, the Charismatics, the Holy Name Society, etc. ln 1961, a spacious hut was constructed by parish volunteers for use by youth organizations and a surplus hall for the large weekly Bingo attendance. On 1 July 1984, St. Francis de Sales was declared a unilingual English parish.

For years, the weekly bingos, organized by Jean-Marie Drouin, was the biggest Bingo in Cornwall. Repayment of much of the parish debt was accomplished through the efforts of the Bingo Committee. The spacious rectory built in 1956 was often referred to as the House that Bingo built. The Bingo ceased to function in 1986.

Perhaps the person who did the most for St. Francis de Sales was Jean-Marie Drouin. Secretary of St. Francis de Sales School Board, he helped organize recreation for the children of the area by establishing and running a recreational program, a skating rink with lights in winter, a playing field for sports in the summer, and movies in the Church basement. As well as co-ordinating the weekly Bingos, Jean-Marie served as organist and organizer of the choir. Recognition of his many services was rendered to him at a parish function in 1974.

St. Francis de Sales continues to be a very vibrant parish. Community singing has always been encouraged. ln 1971, St. Francis de Sales Folk Group was formed with over 70 teenagers participating. The first director was Emily Phillips and she was succeeded by Hugh McAlear. ln 1973, the Group visited Calgary, Alberta, and traveled through the mountains to Prince George B.C. An active parish council was established in 1972.

ln 1994, mother nature surprised everyone with a major meltdown on 29th January. At the end of the 11:00 a.m. Mass on Sunday, 6th February, the new chair of the finance council informed Father Ostler that a separation was occurring in the ceiling of the building. Obviously, the snow, laden with water, was too much for the old structure to support. The building was immediately declared out of bounds. The next morning, an inspection revealed that most of the ‘frames’, known today as trusses, were broken in the attic. On 11 March, the Finance Council decided to have scaffolding erected inside the building to prevent a total collapse pending an insurance company ruling. Services and Masses were henceforth to be held in the Hut on weekdays and on Sunday as well as at St. Anne’s School on Sunday.

On 27 May, the insurer declared that the building had to be demolished and reconstructed on the original foundation. On 14 August, a local architectural firm presented the proposed new church plan to the parishioners assembled at the Legion Hall across the street. By an overwhelming vote, recording only three abstentions, the parish members approved the new plan, copies of which are available at the Rectory.

A contract for demolition was awarded to C.D.S. Ltd. of St. Andrews in the amount of $90,950.00 and which called for work to begin immediately. The marble altars were shipped to Toronto for refurbishing and reconfiguration and the Casavant organ was sent to Montreal for a complete renovation. Tenders for new construction were opened on 9 November and a contract was awarded to Bourgon & Associates in the amount of $743,979.56, the lowest of seven tenders.

The total project was to eventually cost over $1.4 million. The insurers covered all costs except for approximately $100,000.00. The new design of the building ensured energy savings and space efficiency. The basement hall was completely renovated including new washrooms, the electrical room, the kitchen and new furnaces were installed. A new electronic bell system was added as well as a ventilation system that later received a new air conditioning unit.

On 28 April 1995, parishioners enjoyed a Homecoming evening following the Celebration of the

Eucharist in the new building. On Sunday, 8 October, Bishop Eugene LaRocque blessed the new St. Francis as well as its cornerstone proudly displayed on the outer North-West comer.

ln addition to many mementos of the old church incorporated in the building, such as the stained glass windows, pews, the Way of the Cross, altar, organ and a new baptismal font made of marble from a former side altar, the bell which peeled from the old steeple was mounted on the front lawn.

At the turn of the century, St. Francis de Sales parish boasts a new building, a renovated Hut on the newly paved and drained parking lot, a renovated and modernized rectory, an embellished outside property, and, more importantly, a significant increase in new parishioners from five years earlier.

Photos from celebration and introduction by Don Smith. The historical account was provided by the parish and edited by Don Smith.