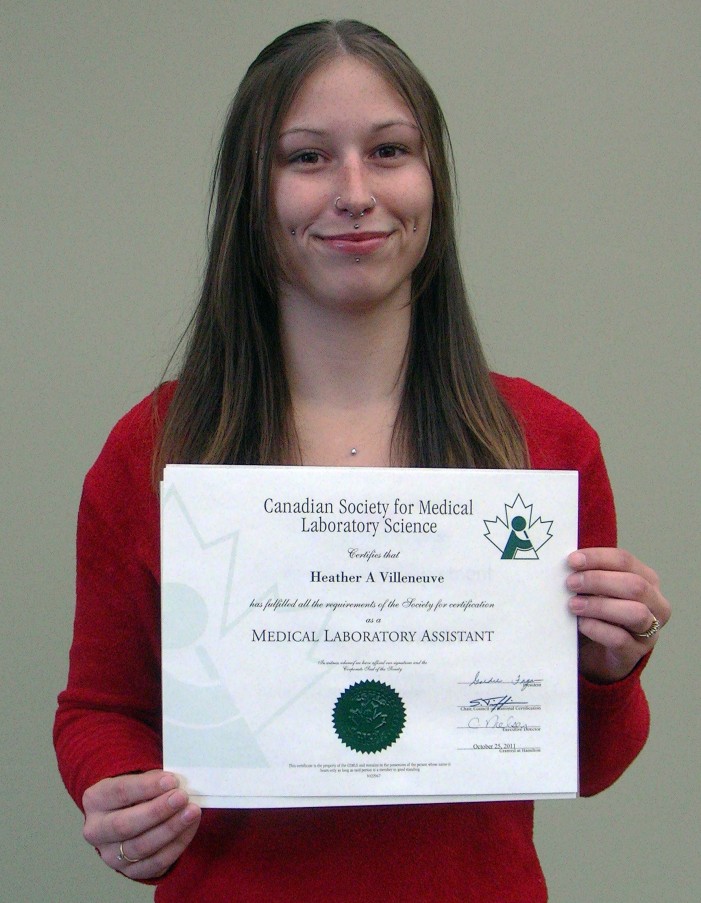 CFN – Heather Villeneuve is the face of the language wars leaking out of Quebec right across Canada.   She’s the victim of a system of hypocrisy.

The Cornwall girl, born and bred has spent over $30,000 on her education graduating as a Medical Lab Assistant in 2011.   While the two other Cornwallites got jobs instantly Heather has yet to find employment.  Her crime and fault?  She’s not bilingual.

Bilingual advocates like Jean Lecompte will tell you the importance of bilingualism; but essentially that’s a political correct way of saying French.   The levels of testing for French proficiency are secretive and frankly most native Francophones could not pass these tests.  And there are no equivalent English language tests for most employment in particular with government agencies.

Official bilingualism in Canada has been a failure.   In the forty years or so of its existence less Canadians speak French than before.  Frankly this isn’t an issue any longer about protecting the French language and culture.  It’s about an industry that’s evolved to spread  Bilingualism that has led to situations where advancement and the ability to gain employment if one isn’t French or able to pass these tests is the life and death knell for communities across Canada.

When you can’t go over the rank of Major in the Canadian Armed Forces without being bilingual that’s scary.   When nurses get suspended or fired for speaking out costing hospitals thousands of dollars while appealing to the public for funds that’s an issue.

And when someone who doesn’t want to leave her home after investing in her education locally has to move to find work that’s an issue.

Being bilingual is a wonderful asset; but should it be the deciding factor in someone gaining employment to the degree that it has across our great country?

It’s more about the definition of Official Bilingualism and what society finds acceptable or not and that’s a whole other issue as most of these issues are dealt with behind closed doors.   The new buzz is that government employees are now going to have to be bilingual as there is a push for the them to have the choice of what language to speak with to each other.  That it’s not about serving the public anymore.

You can get a few hard core political types at a remote government office in the West and bam.   The entire team will have to be able to communicate at high levels of French.

While this debate is a much broader subject here in Canada and Ontario Heather Villeneuve is dealing with its injustice in her life.   She’s working a minimum wage job trying to pay back her student loans.   She’s not even sure she could afford to move when a job opens up hundreds if not thousands of kilometers away from her home.

And sadly she felt that she had to try and turn to a local politician for help and not even in her own town where the Mayor and City Council have ducked the subject entirely.

She wrote a letter to the media and to South Stormont Mayor Bryan McGillis:

My name is Heather Villeneuve, I am a certified Medical Laboratory Technician and I pump gas part-time at minimum wage for a living. Why am I not using my diploma and working in my field? It’s not by choice; it’s because of the discrimination happening in Cornwall and the surrounding area. I am very skilled in my field, but I am not being given the chance to prove what I am capable of, due to one simple factor: I don’t speak French.

For years, I have been discriminated about my appearance; I don’t look the way society generally dictates as “normal”. But it upsets me that I am now being discriminated against, because of a skill that I lack and don’t necessarily need. I was not raised French, and I honestly do not believe that it is a skill I need to possess to do my job properly. I have applied time and time again to hospitals and clinics in the area, for the end result of them all telling me that I am not what they are looking for, because of one small aspect. As someone who has lived in Cornwall my whole life, I have never come across a person that can’t at least speak enough broken-English to get the point across. And as a MLA, patient contact is so minimal that extensive conversations are not needed to be carried out.

I have tried to stand my ground on countless occasions and explain that I can still complete every task assigned to me with the upmost attention to detail, but unfortunately it all comes down to a specific way of thinking, a bilingual way of looking at things. A Census from Statistics Canada shows us that only 3/10 individuals in our province have French listed as their primary language spoken. This proves that more than three quarters of Ontario’s residents are English speaking. ONLY 14% of the French population in Ontario lives in our South/East region.

.
So here I am, stuck in Cornwall, with a college education and nowhere to go. I can’t afford to move with my large sum of student loans, and it will be a very long time until they are paid off from pumping gas at minimum wage. So here’s my question, when is this discrimination going to stop, so the residents of Cornwall will have a chance to better our small community?

I would like to take this time to thank the South Stormont Council, and Bryan McGillis for advocating for people like me trying to make a difference in the health care system. I appreciate all of their support and efforts in helping me in this process.

We had a chance to catch up with Heather and Mayor McGillis at the Township offices.

Mayor McGillis and I spoke about the challenge of retaining young people in Eastern Ontario and the ability to gain employment after finishing education was a hot point.

Are we ready in Ontario to demand that our schools turn out students with those language schools so that they can fill jobs at home?  Does it make sense to try and import people from Quebec purely for linguistic reasons?  And are there even people from Quebec ready to fill those positions?

Canadians that earn their educations should have the right to work where work is available; French, English, or any language.

The Face of a Linguistic Victim in Cornwall Ontario – Lab Assistant Heather Villeneuve Faces Having to Leave Home Over Bilingual Status added by admin on October 25, 2012
View all posts by admin →