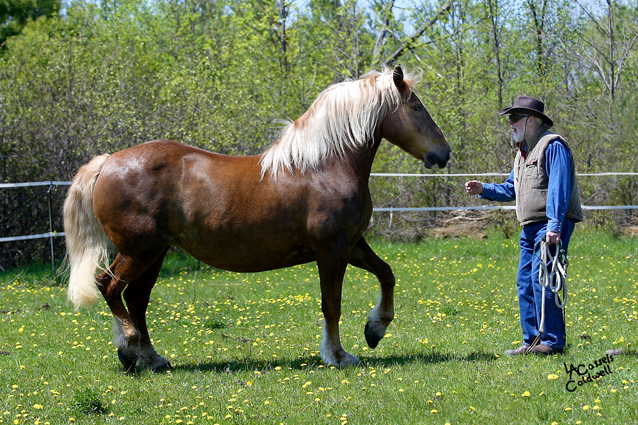 Equine-ality
Several years ago I was introduced to and became fascinated with the psychological study of horse personalities or ‘Equine-ality’ as I call it.

Just like humans, horses exhibit various personality types which help to define their behaviour. There are certain characteristics of horses as a species that are common to all horses, but there are also specific characteristics that are indicative of his equine-ality (personality). When dealing with horses it is important to know him as a species and also to understand him as an individual.

When humans learn this concept and use strategies that are appropriate for his equine-ality, they usually find that over time those instances where he is emotionally unfit become less predominant and the horse becomes more able to control his behaviour.

Emotions
Emotions are feelings and sensations and horses are extremely sensitive, feeling animals. As a prey animal, they are pre-programmed for fear and to react on that fear with lightning fast reflexes because that is what their survival is based on.

Unfortunately, those same instincts that have ensured his survival for millions of years are also the ones that cause most of the problems between horses and humans.

Humans often mistake fear for disobedience simply because they don’t understand the prey animal nature and because they have not learned to read the body language and expression of horses that tell us when a fearful state is occurring. This leads humans to look upon horses as dumb animals with no feelings or capacity for thinking and often humans slip into the use of excessive force to tame them. The untameable are discarded or even destroyed. Because horses are so adaptable, this approach of force, fear, and intimidation, unfortunately, is still the prominent training approach for horses all over the world. It is easy for the predator human to slip into this mode, but horsemanship is beginning to change for the better.

We sometimes refer to it as natural horsemanship. It has become a world wide movement to revolutionize the training approach for horses. It has brought together horse lovers concerned about a gentler approach that preserves the dignity of the horse and seeks results through communication, and psychology rather than force.

Horses have become one of the greatest survivors on earth. They have learned to outsmart, outwit, and outrun predators and their extraordinary capacity for adaptation also contributes to this success. I often wonder if we humans will survive as long as they have.

Three Major Instincts
Even after thousands of years of intervention and selective breeding by humans, horses still rely on three major instincts for their survival.

3. Safety in numbers (the herd)

Living in fear is stressful and unhealthy – mentally, emotionally, and physically which is why one of the most important responsibilities we have as our horse’s partner is to help him become more emotionally fit, to become one ‘Spirit in Unity’ with him.

Horse Emotions
Horses display some of the same emotions as humans – fear, frustration, anger, aggression but their reasons are more about the present and somewhat about their past experiences. They have everything to do with self-preservation or dominance.

Other Emotions
Some people claim that horses feel sadness, such as when a mate dies. However, this can also be interpreted as vulnerability because they are alone. Horses do form strong bonds, but whether they actually experience sadness or sorrow is not proven. In humans the frontal lobe is the part of the brain that is associated with human emotions connected to the past and future and to feelings of empathy for others. Horses do no have a frontal lobe. Their brains and their instincts are more primal and are based on instincts and survival.

On the other hand, it is true that horses can be “unhappy” because their life is miserable – kept in solitary confinement, a cruel trainer, micro-managed, misunderstood, stressed, frustrated, bored, lonely, pent-up and so on. In this case what is the definition of ‘unhappy’? Sad, miserable, discontented, despondent, depressed.

If you have read this and wondered about how some of the same things apply to humans, you may be on to something.

Happy horses stand out in a crowd. They look happy and act happy because they are happy. This is the kind of horse that everyone wants, but few realize that this seemingly perfect horse can be someone else’s nightmare if he’s not treated with the dignity, savvy and love that he deserves. Great relationships are made and sustained, they don’t just happen by accident. If you have such a great partner, you should be congratulated because you have contributed to his happiness.

May all your dreams come true,
Garry “Horsetalker” Meek