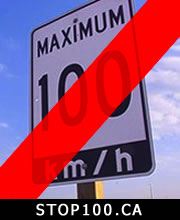 In response to: “Three minor crashes on same stretch of highway” http://www.stcatharinesstandard.ca/2012/12/08/three-minor-crashes-on-same-stretch-of-highway

On Saturday, Dec. 8, it was reported that three separate crashes occurred on the same section of freeway near St. Catherines during wet road conditions. The limit on that stretch drops to 80 from 100 km/h to warn motorists to slow down ahead of a dangerous curve. Unfortunately, this warning is often ignored.

OPP sergeant Jan Idzenga was quoted saying that people are simply “refusing to slow down” to 80 km/h in than zone and “routinely travel […] in excess of 100 km/h,” and consequently crash when surface conditions are less than ideal.

The Ministry of Transportation, however, continues to hypocritically stick to its mantra that 100 km/h is the absolute safe maximum on all straight, wide and safe stretches of roads.

Over 60 jurisdictions worldwide post 120-130 km/h on speed limit signs (complete list: http://stop100.ca/poster4.jpg). We on the other hand, seem to be treated by our own government as the most incompetent motorists in the world. It is worth repeating that the 400-series speed limit was 112 km/h four decades ago when vehicle safety technology was incomparably inferior.

Is it that difficult for the Ministry to understand that drivers must be presented with reasonable speed limits in order to make a rational decision to slow down when necessary? If current widespread violations caused by the arbitrary and politically motivated 100 km/h on speed limit signs are fine with the MTO, then why are they surprised that vehicles crash in that more realistically posted 80 km/h zone?

Maybe it’s time to realize that the 100 km/h speed limit, when thoughtlessly applied to our world-class highways with much better cars is actually causing more harm than good.

It seems rather obvious that given a more reasonable speed limit of 130 km/h where possible, motorists would pay attention to the sudden reduction to 80 km/h, and take it more seriously.

They would finally believe that the speed limit is there for a reason and that obeying it will impact their safety.

I fear that what our illogical, impulsive and non-science-loving authorities might do to slow down the drivers to 80 km/h in that zone – is legislate another blunder and post a speed limit of…. 60 km/h, instead.