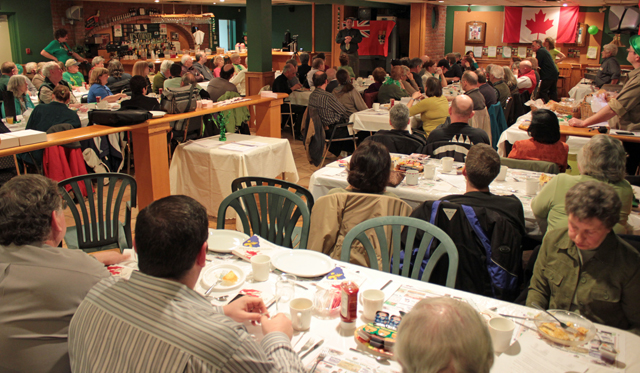 Some of the many presenters

Vars – Inalienable Rights and Freedoms were the topic of conversation at the 2nd Annual Canadians for Language Fairness St Patrick’s Day sell-out brunch at KC’s Country Inn in Vars as supporters came from as far away as: Collingwood, Marmora, Kingston and Belleville.

Information and laughter flowed continuously for this fundraising event that lasted over five hours. Special thanks to all supporters and businesses that contributed door and raffle prizes for the occasion. Two businesses in particular, Pierre & Fils Dépanneur / Vidéo and the Shoppers’ Drug Mart.

The unexpected arrival of a sampling of “Condom Gate”, the latest City of Ottawa scandal that resulted in a person receiving, for free, over 17,000 condoms from the City, added hilarity to the fun and festivities.

Frustration was expressed in regards to there no longer being justice in our justice system and the futility in going after politicians because even if there is a “changing of the guard”, such as in Russell Township where those who passed the bilingual sign bylaw were all turfed out the following election, the bylaw still remains in place.

The media controls the message and supporting those that have finally given us a voice, especially SunNews, Cornwall Free News and CFRA, is a must.

Educating people as to what having Inalienable Rights and Freedoms means and how we must ALWAYS “stand on guard for thee” is essential in ensuring that our children and grandchildren continue to have the freedoms our fathers and grandfathers went to war to fight for.

Our highlight video will provide a glimpse of the quality of the presentations made.

Also, here is a link to the video Playlist containing the full-length individual presentations made that day.

To do nothing IS to do something and this, Canadians for Language Fairness, is certainly doing something.

The preceding is a paid advertisement.