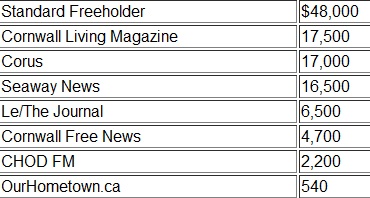 CFN – That’s the limited media chart expenses for the City of Cornwall from 2011.   The city  to date has refused to provide one for 2012, but certainly Claude McIntosh of the Standard Freeholder is earning his paper’s keep at the top of the money list by spinning for his good friend Mayor Bob Kilger of Cornwall Ontario.

Claude wears Rose coloured adult diapers.   Instead of objectively looking at facts and evidence; something apparently he’s disdained most of his very long and “storied” career; he instead tugs at strings, mystical strings rarely connected to facts for his starting points.

In his latest weekly movement he bemoans the poor Mayor, his good buddy, as the victim of conspiracy theories even though his own paper, the Free Holder now is reporting on some of the very limited info that is being released due to the Mayor and his team using massive amounts of legal money to handle scandal after scandal.

As Bob has said, the buck stops with him and that means the Paul Fitzpatrick scandal(s) and all those that have lost their jobs and/or been given settlements and all the legal bills associated with them end with Bob.   Of course Bob and the City still are not answering whether the City is paying his own legal bills or not while we do know that the poor Whistle Blowers are having to pay their own.

And to Claude, what exactly are the Diane Shay’s and Rob Hickley’s trying to gain by putting themselves and their families through this?

One thing about conspiracy theories is that they are hard to kill off.

So, it is no surprise that an exhaustive investigation by a seasoned outside investigator that took months to complete and found not a shred of evidence to the rumourmongering and innuendo — in some cases outright slander — that hung over city hall is being scoffed at by those who helped spread the dirt.

Recently, in a brief statement, city hall announced that the investigation was completed with no proof of any wrongdoing.

The investigator interviewed dozens of people, some of whom claimed to have concrete evidence that there was hanky-panky at play.

The last person interviewed was a former city councillor who, like everyone else, claimed to know a whole lot, but couldn’t give the investigator an ounce of evidence.

Well Claude the city has not revealed who the investigator was?  It has not released who was interviewed and who was not.  For example was Donna Derouchie even interviewed?   Just because City Hall announced no proof of wrong doing doesn’t mean that there isn’t or that they are correct.   How would you know how many people the investigator spoke to unless you yourself are rumour mongering or have inside information?    How on earth would you know who the last person interviewed?

So Claude you’re either pulling stuff out of your Depends® or you’re being fed very detailed confidential information that is supposed to be in camera and not released to the public.  And if the latter is the case who could possibly be feeding you and why?

Now we have another alleged whistleblower, a fire department deputy chief, making a serious conflict-of-interest charge against Mayor Bob Kilger. In a strange approach, the deputy chief drew back the veil of secrecy (the worst kept secret around city hall and the fire department) by issuing his own news release, something that usually is handled by a complainant’s lawyer.

Well Claude why would a long term veteran on the cusp of retiring come forward?     And of course you already knew that the high legal costs Mr. Hickley has endured have necessitated that he move forward without a lawyer for this stage of his journey; something that the public is already stepping forward and organizing a collection to help with his legal bills for.   Mr. Hickley doesn’t get to tap the city for unlimited legal costs like Mayor Kilger.

All of this to Mr. McIntosh is smoke and conspiracy theories.   It’s enough to have many viewers asking who really is conspiracal in this paradigm.

So Claude here are some facts.

.
The City of Cornwall has completed a thorough review of a complaint filed under the City’s
whistleblower policy. The complaint was found to be unsubstantiated by a qualified, experienced and
independent outside investigator.

It is a fundamental principle of the process that the individuals involved and the nature of the complaint are kept confidential. As a result, the City cannot release the details of the persons involved or the complaint.

There have been many victims in Mayor Kilger’s desperate attempt to keep power in the utterly shameful grasp of power.   More shameful are the group of councilors keeping him there while they know much of the truth if not all.

This cabal are as guilty as the mayor and the public needs to step up and confront them for what they are costing taxpayers.

Guilt by some silence:   Maurice Dupelle

Add in city managers and staff like recently retired Paul Fitzpatrick, Denise Labelle Gelinas, and currents Helen Finn, Bob Peters, Mark Boileau, and Kevin Lajoie, and this is why Cornwall has had to raise taxes 2.88% in spite of MPAC, of which Mayor Kilger sits on the board, raised rates 4.5%!

And unlike the Free Holder we are not muzzling comments which you may post below.   That’s the biggest indictment of spin when you can’t face criticism for your words and statements, right Claude?   Of course the biggest stink of fear was the tenor of Mr. McIntosh’s scribble.   No real shots or lashing out.  Mostly spin spin spin.   It’s time for the rinse cycle.

Claude McIntosh Latest Desperate Spin for Mayor Bob Kilger and his Conflict of Interest Scandal in Cornwall Ontario added by admin on April 13, 2013
View all posts by admin →