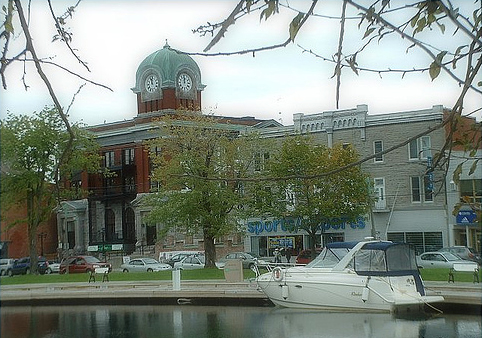 Both have populations between 40-50K; both have strong French Catholic traditions, and both straddle the same waterway.  One of course is in Quebec and one in Ontario.

The tests were balanced.   Three businesses were visited in each city.  One was a Big Box store like   a Wal-Mart; one was a fast food outlet like a Tim Hortons, and one was a Mom & Pop foodery as Tourism is rapidly becoming important for many of the former Mill towns running along the 401 and Highway 20 in Quebec.

Each business was tested in the same manner with the same scenario.  One where the secret shopper said “Hello” or “Bonjour” to identify themselves linguistically; once in a fractured manner showing an attempt to speak the majority language, and once clearly in the language of the majority.

In the linguistic greeting Cornwall came out ahead with all customer service people responding in the same language as spoken to.   Two in Valleyfield refused to even try to speak English when the person said hello in English (Boo Wal-Mart!) ; one in particular refused to even try and speak any English at any point of the transaction.

Valleyfield won the competition when one store with yummy chocolates not only responded in English when our secret shopper spoke to them in French, but other service staff in the store were totally clued into the importance of good linguistic customer service.  Our Secret Shopper actually spent over their budget as they wanted one of the home made mini pizza’s they sell!   They said that feeling comfortable and happy while shopping; especially for food spurred sales.

In the test of the use of “fractured” language Cornwall narrowly scored ahead of Valleyfield with more service people trying to assist the secret shopper.

In this age of local tourism and local shopping being of a wider range it’s always interesting to see how important customer service is and the quality of care that businesses take in serving the public; especially when the public is from out of town.

poll by twiigs.com
Which city do you think is friendlier and is it important to be served in your language when shopping?  You can post your comment below.

Cornwall Ontario Narrowly Beats Valleyfield Quebec in Linguistic Customer Tourism Courtesy Challenge – May 4, 2013 added by admin on May 4, 2013
View all posts by admin →