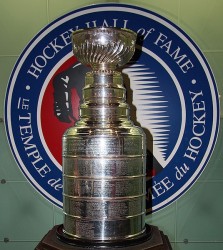 CFN – Round two!  The puck drops tonight as Ottawa takes on the Penguins in game one of their series.   Two very different teams.   Ottawa plays with a pesky ferocity unmatched in these playoffs.   There are meaner teams, bigger, teams, and better teams; but does any team seem to want it more than the Ottawa Senators?    They are also the last Canadian team standing so this scribbler is rooting for them big time!

Craig Anderson is the key to the series.  If he keeps rolling anywhere near his .950 clip the Penguins are cooked.   The templates of these two teams also favors the Sens.   The trick is keeping the Penguins big guns in their own end.  Mr. Crosby and friends cannot score easily from their own end and that’s where the Sens punishing game can be the difference as they are great at winning the one on one battles and with Erik Karlsson and Sergei Gonchar getting in the offensive zone is that much easier.

The Jason Spezza factor looms over the series.  If the big centre is ready to roll the Senators power play will be lethal.

While I don’t expect Pageau or Alfredsson  to have the same impact in this series don’t be surprised to see Jakob Silfverberg, Milan Michalek, and Cory Conacher to get more results.   Ottawa had an easy series compared to Pittsburgh and has more rest as well.  It should be interesting to see who Chris Neil targets.

Pittsburgh has Tomas Vokoun in nets and if the 36 year old is on his game Ottawa will have to shoot a lot more and get more traffic in front of the net.   Evgeni Malkin notched 11 points in 6 games and is lethal.    Can Pascal Dupuis clean up with 5 goals again?  Will James Neal only score 1?

If Pittsburgh can get bottom line scoring they win.  Their defense is much stronger than Ottawa’s and that could be a difference.

Who will win?   It’s too close to call and frankly too weird, but I’m rooting for the Sens!

Where LA could have the edge is in meanness and grit.  Don’t be surprised if they literally pound the crap out of SJ early and often and if the intimidation works LA wins.

San Jose doesn’t need Joe Thornton to carry them to win which could be why Jumbo Joe has 6 points in 4 games.  Dan Boyle and Brent Burns were humming against Vancouver.  When LA punishes them it should be interesting to see how they respond?

Playoff weapon Dustin Penner already has 2 goals in limited use and scary as it is LA has underperformed offensively so far in the Playoffs.

Detroit at Chicago.   I didn’t think the Wings could be the Ducks.  I’d be surprised if they can win 2 games vs Chicago.   Detroits biggest problem is that nobody on D has stepped up offensively.  There is no Nick Lidstrom to man the powerplay and keep the puck moving.

While that hasn’t seemed to stop messers Zetterberg and Datsyuk it still will be needed vs a very strong Hawk squad!

Chicago is the most rounded fullest team in the playoffs.   Corey Crawford is posting Craig Anderson like numbers and while many people think about the offense of the Hawks they tend to not give up many goals.

New York Rangers vs Boston – The Rangers overcame a hot Washington squad by neutralizing Alex Ovechkin.   The Boston Bruins have a deep team.  Rick Nash was held to 2 assists in the series and Brad Richards only notched one point, a goal.    While Derek Brassard put  up 2 goals and 7 assists there’s not enough in the tank to beat the Bruins who are are simply a deep and talented team who in spite of whatever issues or weaknesses they have as a team manage to win.

The comeback against the Leafs should have them fired up which is very bad news for Ranger fans.   The Bruins big money earners got it done against the Leafs wiht Krejci notching 13 points, Lucic 9 points while being a beast and Captain Zdeno Chara gaining 8 points.

Who do you think will win Hockey fans?  You can post your picks below.

Puck Drops for Round 2 of NHL Playoffs – Fearless Picks! Sens, LA. Chicago, Boston added by admin on May 14, 2013
View all posts by admin →