Rangers Survive after OT Win Over Bruins – Tortorella Lives to see Another Day! May 24, 2013 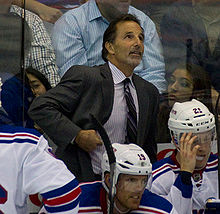 CFN – Love him or hate him, as many do, nobody can say that Rangers coach John Tortorella is anyone else other than his own man.   The abrasive fire brand coach of 11 and half seasons has been the playoffs in 8 of those seasons and brought home a Stanley Cup once while winning three divisional titles.

This has been a disappointing season for the Rangers and talk radio shows even in Montreal are abuzz about “Torts” getting the axe as though it’s a given.

Last night the coach benched his star centre, Brad Richards, he of the huge free agent contract with a whack of years left who also was coached by Torts in Tampa Bay where they won a cup together.   At the end of the day your star players have to play like stars.  If you sign on the dotted line for the big bucks you have to earn them and the frustrating Richards simply did not achieve results.

The home grown and unheralded Rangers offered up some pride and support for the coach beating the Bruins in OT to avoid a sweep in their round two match up.

Will Mr. Richards be back on the ice next game?    I’d say yes as the pressure would be immense on him to perform and if the Rangers lost without a good perf then Richards would take a lot of the blame.

Torts may not be back for the Rangers next year, maybe Richards likewise as he’s a prime candidate for a costly buy out.   GM Glen Sather likes buying big ticket players; but this season all three of his, Rick Nash, recently departed Marion Gaborik, and Mr. Richards have all had underperforming seasons.   In sports that usually means the finger is pointed at the coach.

Surely this win might bend that finger and if the Rangers find a way to actually move to round three that finger might be turned on the high priced Prima Donnas that simply don’t get the fact that if you take the contract you have to put up the numbers.