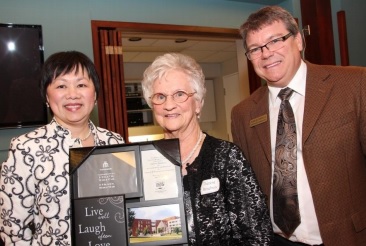 It began in the mid-1970s as she started visiting residents at the Bestview Nursing Home (now Heartwood) where her father resided, and it continues today in a number of locations, including the Glen Stor Dun Lodge.

Mrs. Brisebois’ volunteer career at the Lodge began in 1997, and over the years, she has grown to become a familiar face at the facility. In the past, she has assisted with the Diners’ Club by transporting residents to and from rooms, serving dinner and cleaning up after meals. Spiritual and religious care is a passion for Mrs. Brisebois and more recently, she has joined the Rosary group at the Lodge and leads residents in prayer monthly. She also provides Communion to residents on the Special Care Units at the Lodge.

In 2012, Mrs. Brisebois lost a daughter to illness. The depth of sadness caused Mrs. Brisebois herself to fall ill and she was hospitalized over the holiday season. Once again, she turned to her faith for strength and guidance and she eventually made a full recovery.

Mrs. Brisebois’ long record of volunteer service was recently recognized as she was awarded the Frances Lafave Award for volunteer of the year at the annual Glen Stor Dun Lodge volunteer banquet.

“Mrs. Brisebois has made a tremendous contribution to the Lodge, and the residents and staff are grateful for her efforts,” said Norm Quenneville, Administrator.

At the banquet, officials also recognized several other volunteers for milestones marked by the hours of service. They included 1000 hours awards for Rene Léger and Bernard Thauvette and 500 hours awards for Lorraine Gauthier and Stella Howard.

The Lodge does have a need for additional volunteers to assist with meals in the dining room as well as special events such as the Day Program on Mondays and the Saturday Recreation Program.

“Volunteers are a crucial part of the overall operation of the Glen Stor Dun Lodge”” said Linda Geisel, Director of Resident Services & Volunteers. “It is a rewarding experience for both the residents and the volunteer.”

Those who are interested in volunteering will receive full training and support in advance. For additional information, please contact the Lodge’s Volunteer Department at (613) 933-3384.

Glen Stor Dun Lodge Honours Thérèse Brisebois as Volunteer of the Year in Cornwall Ontario added by admin on June 6, 2013
View all posts by admin →