Does Democracy Begin at Home? or My Battle to be Heard at City Council Part 9 by Jamie Gilcig 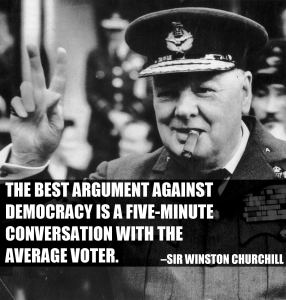 CFN – Democracy is a term that gets bandied around frequently. It’s big in the news right now.  Turkey, Egypty, the US.

It’s talked about in Canada too.

After all, what really is a Democracy?  What does it mean to you?  What is so special about Democracy that so many have died fighting for it.

During WWII it was pretty much clear.   You had Nazi style Fascism on one side and Jo Stalin’s brand of Communism on the other.

Most of the world said blech to both of those and the forces of Democracy fought and succeeded.

Democracy has spread all over the world since; but it seems to be embraced least in the countries that did their best to spread it.

Democracy is a form of government in which all eligible citizens participate equally—either directly or through elected representatives—in the proposal, development, and creation of laws. It encompasses social, economic and cultural conditions that enable the free and equal practice of political self-determination.

Of course there are people that will say that how can people vote properly or clearly if they don’t know the issues.  Having worked in media now for nearly five years I’m stunned at what little I’ve seen.   How many stories have been whitewashed by media for government or corporate interests?

Independent media if successful is either bought out by one of the chains or stomped to death.

I get chastised by some armchair anarchists as I call them for not covering larger more National and International stories because I do feel that Democracy begins at home.   How many Federal or Provincial leaders here in Canada started at City Council like the late Jack Layton for example?

In today’s world it all comes down to accountability and transparency.   They simply don’t really exist any longer.   It’s scary.    Look at the punitive damage inflicted on Whistleblowers from the largest platform like the recent Edward Snowden NSA case to our own Deputy Fire Chief Whistleblowing at City Hall.   Two completely different circumstances but equally punitive and at the end of the day anything that brings the truth to light cannot be a bad thing.

Are we humans made of sugar that the truth would melt us down?    How can we vote or even have an opinion on anything if we don’t know the truth?

When I started CFN I had no desire to be a media martyr.   I had no agenda other than trying to help my community and build an alternative.   The fact that a near one man independent could draw more than four times the traffic as a National shows that there was a need; but at what price?

Our own battle is ongoing.   We have demanded to speak before our city council after they slurred our company with patently false statements knowingly put into a city policy that essentially was a punitive and petty action taken on in many people’s opinions on behalf of some of the corporate larger media.    LINK

The city refused in spite of 134 signatures

Here is our city’s bylaw.

13.3.2        Presentations – time limit
Council shall hear any presentation for information purposes only, and presentations shall be limited to a maximum of ten (10) minutes.

Here is the language where the city can refuse;

The funny thing is that no clear note has been given as to why the request was rejected again.

As discussed with Norm and explained last time, your presentation does not fit the criteria from an administrative perspective. However, you have 2 options:

You can gather signatures for a petition, submit the petition to me to present to Council, and Council will decide;

The other option is to ask Council to suspend the rules within the procedural by-law and allow you to be heard.  This requires the support of 2/3 of Council.

In your request, below, you state that there is nothing inappropriate about your rebuttal.  The issue is that a rebuttal does not qualify as a reason to present. I have copied and pasted your request and my previous response, with the sections of the procedural by-law below:

(There is nothing inappropriate about CFN wishing to rebut the slur in your report. We are not asking for any remedy or apology. We simply want to rebut the information in the same forum that it was released by council.

There are over 60 signatures on our online petition now as well.

You requested the opportunity to appear before Council to rebut a sentence in a report.

The City’s procedural by-law determines what is eligible for a presentation (ceremonial) or a delegation.  Unfortunately, a rebuttal does not fall within those categories.

Thus, I regret to inform you that your request to make a presentation before Council is denied.

13.3.1        Presentations – ceremonial or financial statements
Presentations of a ceremonial nature or the annual presentation of Consolidated Financial Statements by the municipal Auditor shall be heard at the beginning of a Council meeting, immediately following the adoption of minutes.

13.3.2        Presentations – time limit
Council shall hear any presentation for information purposes only, and presentations shall be limited to a maximum of ten (10) minutes.

(a)        Exceptions of the ten (10) minute time frame are provided to the City’s Auditor upon its annual presentation of The Corporation’s Financial Statement.

13.3.3        Restrictions and permission
Presentations and/or Delegations shall not be permitted to appear before council for the sole purpose of generating publicity for an event, or to promote their business.

I know in the big world picture this is but a tiny speck of an example. but Democracy starts at home and this is, my home.

We all need to practice our Democracy more because when we don’t our rights get trampled.  Lives are lost and sometimes we don’t even realize what’s actually happened until it’s far too late.

Holding a politician or corporate thug responsible, even in the manner they occasionally do in China simply cannot fix that damage caused.

What does Democracy mean to you dear viewer of CFN?  You can post your comments below.

If you support free and independent media please consider becoming a subscriber to CFN by clicking the image below.

Does Democracy Begin at Home? or My Battle to be Heard at City Council Part 9 by Jamie Gilcig added by admin on July 8, 2013
View all posts by admin →

47 Responses to "Does Democracy Begin at Home? or My Battle to be Heard at City Council Part 9 by Jamie Gilcig"