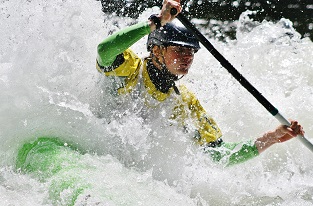 CFN – Michael Tayler and Alexandra McGee, both of Ottawa, have advanced to the semi-finals at the ICF Canoe Slalom Junior and U23 World Championships following preliminary runs on the opening day of competition in Liptovsky Mikulas, Slovakia.

Tayler, who represented Canada as part of the 2012 Canadian Olympic Team, placed 29th in heats in Men’s Under 23 K1 to make the top-40 cut-off.  McGee placed 12th in Women’s Under 23 C1 and teammate Haley Daniels of Calgary was 24th — just missing a spot in the top-20 semi-finals for Women’s C1.

Canada has a team of sixteen athletes and three coaches in Slovakia. Competition continues tomorrow through Sunday with semi-finals scheduled for Friday. Men’s C1 and Women’s K1 events will take place tomorrow.

Summary of Results (Day 1 – Junior and U23 World Championships)

CanoeKayak Canada is the national governing body for competitive paddling in Canada. The organization’s vision is to be a Canadian sport for families, communities and champions. From supporting clubs to developing a competitive National Team, CanoeKayak Canada works to grow a sport which is a rich part ofCanada’s heritage.