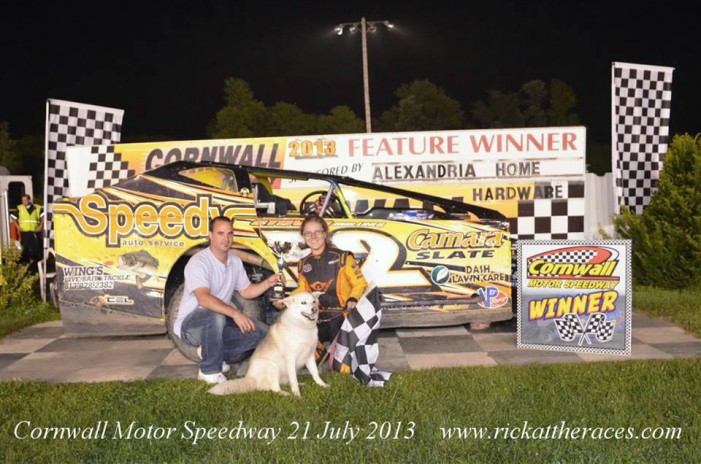 CFN – It was ladies night at Cornwall Motor Speedway as gorgeous weather greeted race teams and fans as a complete race program for all five divisions was on tap as Alexandria Home Hardware sponsored the evening.

Rookie contender Gabriel Richer took the early lead in the 30-lap Jiffy Auto Services Modified feature but Chris Raabe quickly passed him on lap 3. While Raabe pulled away, Richer faded to fifth as Tim O’Brien, Luke Whitteker and Kyle Dingwall were now in front of him. A serious crash occurred in turn 3 on lap 9 as Laurent Ladouceur landed on his roof in turn 3 and sustained severe damage, Laurent was ok. Raabe ran away as the feature got back to green with Whitteker now running second and Brian McDonald now in third. Raabe was able to survive to other cautions to pick his first win of 2013 at Cornwall in front of Whitteker, McDonald, Dingwall and Kayle Robidoux rounded out the top 5.

In the 20-lap Alexandria Home Hardware Pro-Stock Feature race, Dave Seguin led the way as Charles-David Beauchamp was second. Beauchamp got to the lead on lap 2 as PJ Peters followed the leader in second. Beauchamp resisted to charges from Peters as 4 cautions slowed the feature race in the middle portion. Beauchamp survived a late charge from Peters to win his first feature in his career over Peters and Marc Lalonde.

Terry Ladouceur led the way in the 20-lap Tracy Wheeler Storm Realty Sportsman Feature as Mike Stacey and Billy Cook completed the top 3 after 4 laps. After a caution, Ladouceur was the leader as Jessica Power was now in third. Power got the lead using the inside lane just before Bill Mullin and John Mills got together as the feature got to halfway point. While Power was in front, Joey Ladouceur and Chris Herbison were now in the top 3. Power leads the final circuit to win her first event in Cornwall over Ladouceur and Herbison.

The 15-lap Evans Bus Lines Semi-Pro Feature closed the evening as Adam Delormier grabbed the early lead. An early caution gave the opportunity to Derek Cryderman to grab the lead. Cryderman led the final portion to win his third feature in a row.

In the 12-lap Baxtrom YIG Mini-Stock feature, Elizabeth Gauthier landed on her roof in turn 1, she was ok. When the green flag was back out, Pierre Robidoux gained the lead but lost power giving the top spot to Mike Gaucher with Justin Desrosiers running closely. Gaucher was able to resist claiming his third feature in a row over Desrosiers and Dudes Thompson.

Do not miss next week as on the biggest shows of 2013 is finally here with the World of Outlaws Sprint Car series in town, with the fastest cars on DIRT! The best drivers in that category will be in Cornwall to compete for the coveted $10,000 to win!