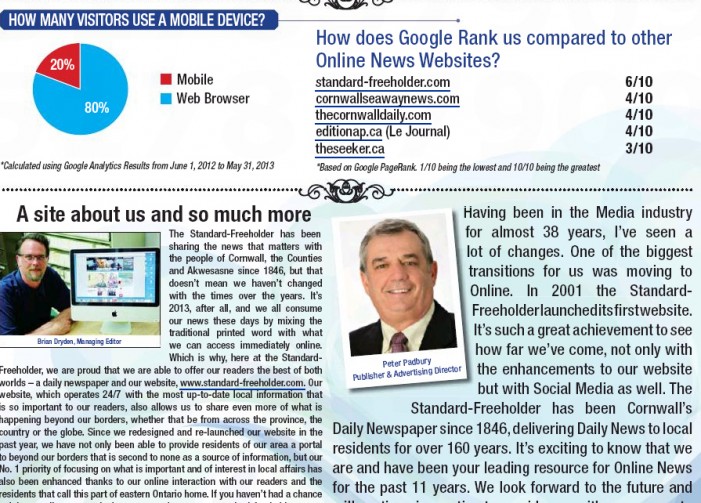 CFN – Poor Brian Dryden.   I kinda like the guy and was hoping to meet face to face over a bevvy instead of how we finally met yesterday.   Apparently he was in the office briefly even though he was supposed to be on vacation?

Mr. Dryden is editor of The Standard Freeholder and I served him with our court papers issuing suit over Claude McIntosh.

It wouldn’t be the first time that the Freeholder had a Mac Attack go awry, but this would turn out to be his last column in a career that spanned an awfully long time.

We asked Mr. Dryden & Tycho Manson, legal beagle for Quebecor, the Parent company of the Freeholder, for a Front page retraction and apology but Mr. Manson refused.

Of course that wouldn’t be the first attack on CFN or myself.   The Freeholder seems to have been waging a war including the image above where they compare themselves to other media and leave us out which is kind of ironic as we have about four times their web traffic?

Our court system is one that is monetarily driven.   Even if you can prove that someone did a nasty you have to prove damages.   Legalese is a different language than the ones we speak; but surely we need a legal system that has remedies short of expensive court cases where sometimes you actually lose money simply to defend your name and put right what should never have happened?

After all Mr. McIntosh does not hit the publish button and his words filter through a system before hitting the newsprint?

A judge will eventually adjudicate on this mess.   As for Mac, he’s back, at the Seaway News.   So far he’s refrained from writing about me and CFN which is probably for the best.  Transcon may keep a tighter leash on him, or maybe it was because they were the first company to reach out and try to purchase CFN (we’ve now had three serious tire kickers in 18 months even though we have not put out a for sale sign ever)

CFN is a tiny ship in a sea of sharks.  There are huge challenges to function day to day and keep us alive which we couldn’t do without the support from the public and our contributors and sponsors.

One of the things I’ve always been told is to strive for the truth and accuracy even though it can sometimes be the opposite of pretty.

And people are human.  When the Freeholder used a CFN photo once without permission we didn’t make a fuss.   A chat with Mr. Dryden remedied that quickly.   But when you do a no no and refuse to fix it or mitigate that sadly is cause for remedies.   Any media outlet has a huge responsibility to keep it real and if they don’t then answer for it.

I still hope to go for that coffee or beverage with Mr. Dryden.    This business of media isn’t easy.