Bees Matter. They feed us, they need our help…NOW. by Jacqueline Milner

By Jacqueline on September 2, 20134 Comments 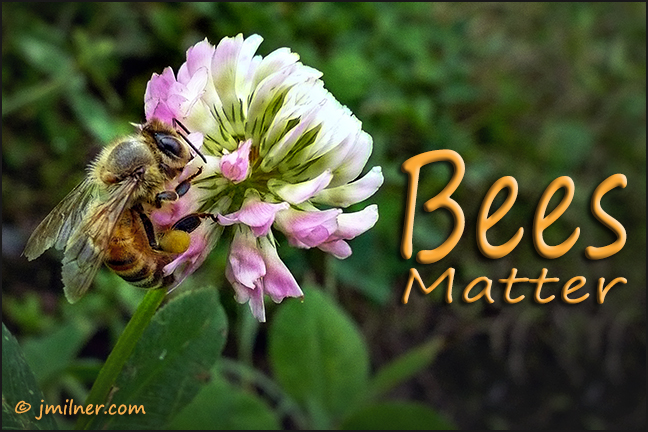 CFN – Yes this is the Earth Matters column.  We are changing the title of this column for today out of respect and consideration for all this little flying animal does for us each day.  Bees, which are critical to our food supply are experiencing immense life challenges due to the hand of man.  They need our attention and help… NOW.

Europe banned the use of neonicotinoids early in 2013 and as a result the maker of such chemicals, Bayer, has decided to fight the ban despite the link of these chemicals to bee deaths.  According to the team at SumOfUs   “̎The European Union banned these bee-killers early this year after a massive public campaign and a clear scientific finding from the European Food safety Authority that neonics pose huge risks to bee populations.  Bayer fought against the ban every step of the way, using tactics taken from Big Tobacco, pouring millions into lobbying and fake science to stop decision-makers from taking action. ̎

There are many articles about our precious bees, their decline over the past few years, and how pesticides are linked to the decline and death of this animal.  Visit  http://beeandgarden.com/?tag=neonics  for relevant information.

We have also been hearing about declining bee health being attributed to Genetically Modified Organisms.  The following    ̎Death of the Bees:  Genetically Modified Crops and the Decline of Bee Colonies in North America ̎ http://www.globalresearch.ca/death-of-the-bees-genetically-modified-crops-and-the-decline-of-bee-colonies-in-north-america/25950  discusses various arguments thought to affect Bee health.  I urge you to read Argument 4:  Terminator Seeds and the results of autopsies done on bees trying to collect pollen from these plants.

Now if like me, you are unclear about how a Terminator Seed works,  give this following link a read.    ̎How the Terminator Terminates ̎   http://www.psrast.org/terminexpl.htm     As far as I understand a ribosome inhibitor protein (RIP) kicks in at just the right time of the plants seed production growth cycle and kills it by inhibiting protein production, something needed by cells for almost everything, essentially needed by cells for life.  According to the patent, the RIP is non-toxic to organisms other than plants.  Furthermore, a piece of information contained in the above which talks about treating the seed with the anti-biotic tetracycline to activate the   ̎terminator sequence  ̎  right before they are sold to farmers is disturbing considering all the information we have heard over the past years of our overuse of anti-biotics.

So what is a person to do?  Well I am certainly going to bed this evening a little more enlightened and feeling a little more empowered to make decisions on what is best for my family and community.  I know there are very doable steps that I and my neighbours can take now, today, to help our precious bees who are indispensable in feeding us and all the rest of our fellow creatures.   We can design our gardens to incorporate plants, water features and shelter where bees can thrive throughout our growing season. The following contains an elaborate list of bee friendly plants.  http://beespotter.mste.illinois.edu/topics/beegarden/#flowerlist

It might surprise many of you to know that according to http://www.ecomythsalliance.org/2012/10/ecomyth-all-bees-sting/  all bees do not sting ̎.  Read that again please!  Only 50% are capable of stinging and those would be the females.  As per the above, virtually all the bees that one sees flying from one flower to the next are non-aggressive.  I have personally been stung twice in the last year, once from a wasp and once from a bee, both stung me in an effort to defend themselves.  To close things off I suggest the following link  http://davidsuzuki.org/what-you-can-do/queen-of-green/videos/bees-bath-and-beyond/  from the David Suzuki Foundation which provides easy, simple ideas for living in harmony with bees in our home, school and business environments.

Your commentary is, as always, encouraged and welcome below or to earthmatters@jmilner.com 4 Responses to "Bees Matter. They feed us, they need our help…NOW. by Jacqueline Milner"