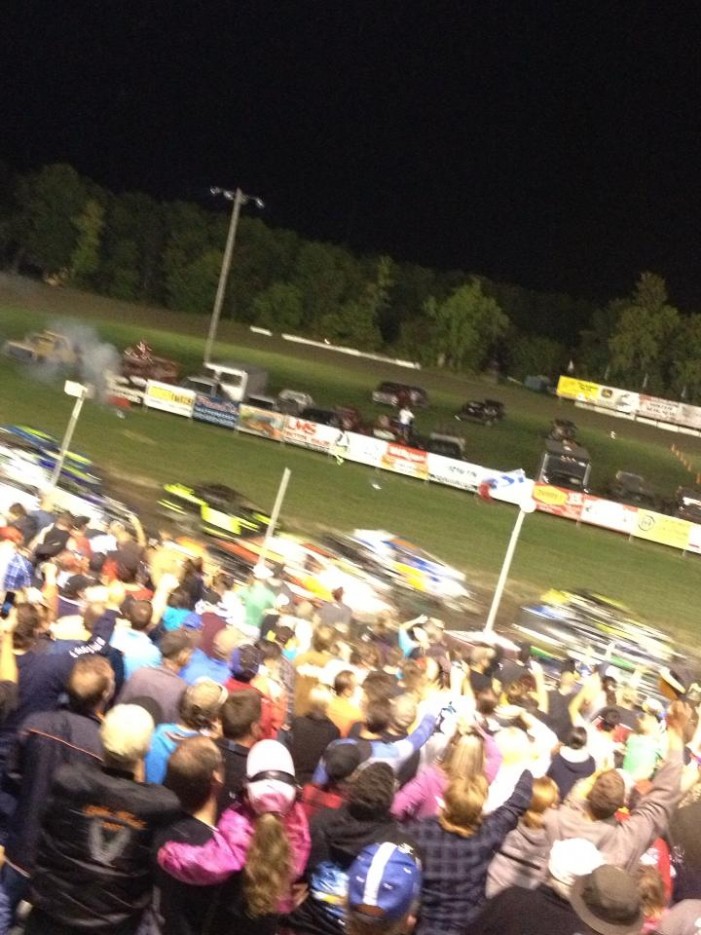 CFN –  Already the last event of the regular season as the Jiffy Auto Services Triple Crown with 3 major series coming to a close tonight. The Gaetan`s Chip Stand Canadian Nationals had a $5,000 to win, 125-lap Modified feature event along with the 40-lap Mohawk Race Parts Pro-Stock series and the 40-lap Seaway & GM Performance Sportsman Series. The Semi-Pro and Mini-Stock also ended their season with a regular program.

The final round Gaetan`s Chip Stand Canadian Nationals/DIRTcar 358 Modified Series, saw Chris Raabe took the initial lead in the 125-lap event as Stephane Lafrance quickly jumped to second. Caution came out on lap 3 as Mike Bowman had a fire in the back of his car. On the following green, Lafrance grabbed the lead as the yellow lights came back on lap 9 with a 3-car tangle causing the caution. Lafrance leads the way over Raabe and Kayle Robidoux running in third. The yellow flag was back on the speedway on lap 18 as Joel Doiron slowed on the backstretch. Lafrance on top with 25 laps down as Steve Bernard was now in third passing Robidoux. Ledoux slowed the field down on the next lap. Bernard was on the move as he got Raabe and was chasing the leader Lafrance with 36 laps in the books. Bernard passed Lafrance and builds himself a sizeable lead as the race got momentum, Lafrance and Robidoux trying to get closer to the leader as they got into heavy traffic. A lap 55 caution occurred for Brandon Sweet and Justin Lalancette who got together on the front stretch. Bernard rocketed to the lead on lap 60 with Matt Williamson making his way to fourth. Williamson continued his way up grabbing third on lap 70 while Bernard was comfortable in front. The mandatory caution occurred on lap 75 as the car stopped on the front stretch for a 10-minute pit stop.

The green was back after the break with Bernard in the lead, as the top 3 remained the same. The leaders got into heavy traffic on lap 85 as Lafrance was now close to Bernard but the leader was able to build a little distance with 30 laps to go. Dingwall got out of the speedway on lap 96 and the yellow was out. On the following green, David Hebert found something running up to fourth as caution was out on lap 100. Looking for track championship and also the Canadian Nationals title, Mario Clair stopped on the front stretch and was sent to the pits. Only 1 lap was completed as championship contender Chris Raabe stopped in turn 4 opening the chances to others for the titles. While Bernard was alone in front, Lafrance, Williamson and Hebert had a good battle for the other top 4 positions. Hebert got Williamson with 4 laps to go for third spot. Bernard led the final laps to capture the win over Lafrance and Hébert. Mario Clair was crowned the 2013 track champion as he also won the Doiron Engineering Cup as Brian McDonald captured the Canadian Nationals.

The 40-lap Mohawk Race Parts Pro-Stock Feature had Stéphane Lemire getting the lead in the early portion of the event as Jocelyn Chicoine got second as Jocelyn Roy third with 10 laps completed. Lemire had a 5-car length lead over Chicoine running the low side of the speedway with 25 laps to go. A great battle for the lead occurred between Jocelyn Roy now in the mix and Lemire as Stephane Lebrun was now running in third. Dave Bissonnette made his way to third with only 10 laps to be completed as Roy and Lemire running side by side. Both drivers swapped the lead as the race got closer to the finish. Lemire made a final pass on the last lap to capture the win over Roy and finishing in third, Bissonnette captured the track championship as Stephane Lebrun was crowned the Mohawk Race Parts Pro-Stock Series.

John Mills took the early lead in the 40-lap Seaway and GM Performance Sportsman Series with Robert Delormier and Corey Wheeler in third. Caution came out for Shane Pecore on lap 13. Mills to the lead for 3 other laps as Corey Wheeler got off the track in turn 4 and caution was out. Mills still in the lead with Joey Ladouceur and Steve Bernier joining the mix in the top 3 as the feature got to the halfway point. Mills and Ladouceur got together and Mills spun off giving the lead to Ladouceur, while Bernier tangled Mills losing his strong third. Ladouceur and Delormier swapped the lead for a few laps as the feature got to lap 30. Shane Pecore made a late charge passing on Desjardins and Delormier and had eyes on the first spot with 5 laps to go. Pecore used a lap car to pass Ladouceur in the final corner and won the race. With his second place, Ladouceur secures not only the rookie of the year but also the track title in his first attempt. Finishing fifth, Mathieu Desjardins won the Seaway and GM Performance Series.

The 15-lap Evans Bus Lines Semi-Pro feature had Derek Cryderman take the lead in the later part of the event and captured his 5th feature of the year. Steve Billings completed the event in second spot securing the track title over Cryderman.

The Baxtrom YIG Mini-Stock division was the first to complete their 2013 season with a 12-lap event. Francis Blanchette took the early lead over Marc Reggentin as point’s lead Mike Gaucher made his way to fourth with 3 laps down. Blanchette led the way as Gaucher had issues with his car sending him to the pits. Blanchette led wire to wire and won his first feature of the season as Gaucher was crowned the track champion.

Nearly $20,000 in prize was given during intermission to drivers that had perfect attendance to the different series. In the Modified, Carey Terrance won the Bicknell chassis; Brian McDonald capture the VP Fuels Barrel, Laurent Ladouceur got the 2 Hoosier tires. Marc Therrien, Gilles Godard, Chris Raabe, David Papineau and Alain Boisvert each won a $100 enveloppe.

The last event of the season will occur next Sunday with the annual Fireball Enduro with nearly 300 cars competing in this event with a lot of action, a great opportunity to bring your family to the races. The action will start at 2pm.

Steve Bernard wins final round of Canadian Nationals at Cornwall Motor Speedway! by Martin Bélanger added by admin on September 2, 2013
View all posts by admin →