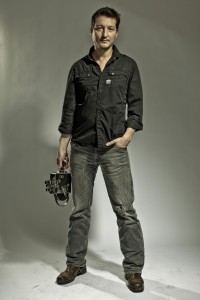 CFN–    I caught up with Irish Filmmaker, Photographer, & Artist Ian Thuillier who has just released his short “Driven” in Ireland.
CFN
Ian Thuillier, filmmaker, photographer, artist, how personal is Driven?

Very.  It’s a rant, a reflection of what people in Ireland are feeling about the injustice of the banks and the government.

CFN
You’ve done a lot of work in your career. You’ve had some acclaim and worked with some talented people. Do you have to leave Ireland to be able to succeed as an artist and filmmaker?
Ian Thuillier
No I don’t think so. I think the market is small enough to make a good size dent with a big idea.
CFN
You’re not in a unique situation as a filmmaker in Ireland. After the Monstrous success of Irish movies in the 90’s what’s happened and how does talent like you get the next level?
Ian Thuillier
But its still really hard to get a film funded here, you wait a long time and jump through so many hoops just to get a rejection.
CFN
did you get any funding for Driven?
Ian Thuillier
I don’t know J, just keep making stuff and hope it sticks, but you only make the stuff you want to make.
CFN
Is romantic Ireland really dead and gone as your lead narrates?
Ian Thuillier
No we won 2 days shooting with an arri alexa from the Directors Guild of Ireland, we passed the a script around and everyone who read it jumped and said ‘yes’ we’ll do this’, and then it just happened very fast and very organically.
Yes it fucking is.
CFN
Yet as gloomy and dark as Driven is you made a film. You haven’t given up.
Ian Thuillier
Well maybe its wrong of me to be so negative. There are a lot of great things about Ireland, the government isn’t one of them, nor is the shower who were in before them. But there are great things about Ireland like our arts sector and creatives.
The arts are strong
CFN
“shower” ??

CFN
Driven was just announced for the Cork Indie Festival? Where else has it been submitted?
And what’s next for Ian Thuillier?
Ian Thuillier
The banks and political parties all in each others pockets and they only care about themselves and fattening their pensions.
Its gone to the Foyle Film Festival and we’re going to choose a select few to put it out to before we release it on the net.
CFN
Have you submitted it outside of Ireland? Is it going to the TIFF?
Ian Thuillier
Currently I’m writing a feature script which will be an extension of the character played in Driven.
I will submit it to TIFF, Sundance and Berlin.
CFN
Final question. What do you say to your fellow Irish Filmmakers that have also lost their girlfriends and spend time watching free internet porn a lot?

hahaha  its really about addictions thats all, its an easy thing to succumb to when you have lost it all.

Support Independent Media by clicking our banner below and Subscribing via Paypal for as little as $25 per year!

CFN One on One with Irish Filmmaker Ian Thuillier on the Release of DRIVEN – Oct 1, 2013 added by admin on October 1, 2013
View all posts by admin →