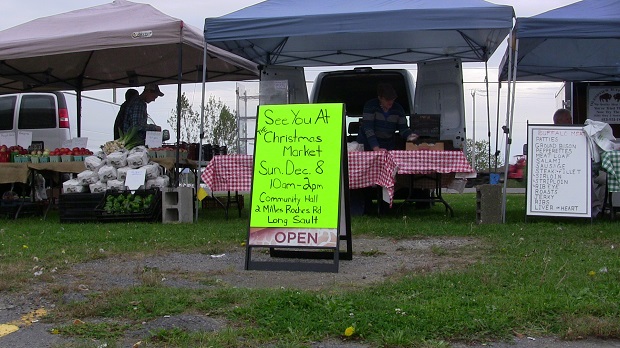 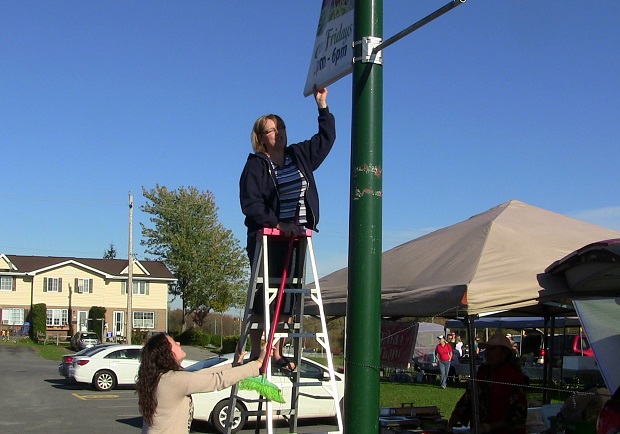 Taking Down the Banners

CFN – The growing season is over for the Long Sault Farmer’s Market but we still have one more market day this year. Once again we will be holding a Christmas Market at the South Stormont Township hall and it will be on Sunday, December 8, 2013. Last year it was a real blast. There were still some locally grown root crops available but mostly it was baked good, canned goods, crafts, coffee and Thai food. This year we may even have some buffalo meat available for your Christmas dinner delight.

Our last day of the season was pretty much like the other market days, except there was no corn. We had one final community service booth which featured some young hockey players selling baked goods and pumpkins. I’ll let the team explain in the video below. We had pumpkin butter at Clarkburn Vegetables, giant jack-o-lantern cookies at Swiss Farm Bakery, a variety of pies at Avonmore Berry Farm, fudge from Melina’s Goodies and Gifts and a Turkey Dinner Blend coffee from Coffey’s Coffee.

But it was wind down day. While quite a few of the vendors still have other markets to attend, others of us are truely finished for the year. Even our market manager, Donna Primeau, was seen taking down the banners for another year with the help of Victoria Cotnam. I’m not really sure what the broom was for but I’m sure there was a good reason.

On behalf of all the vendors at the Long Sault Farmer’s Market, I would like to thank all of the people of South Stormont and area who came to our little market on Friday afternoons. We wouldn’t exist if it wasn’t for your support and good taste in buying the locally produced products that we have to offer. We hope to see you all back next year.

Be sure to mark your calendars for the second annual Long Sault Christmas Market on December 8, 10 AM to 2 PM. I’ll have a nice hot cup of coffee waiting for you.

End of Season for The Long Sault Farmer’s Market by Reg Coffey added by admin on October 12, 2013
View all posts by admin →