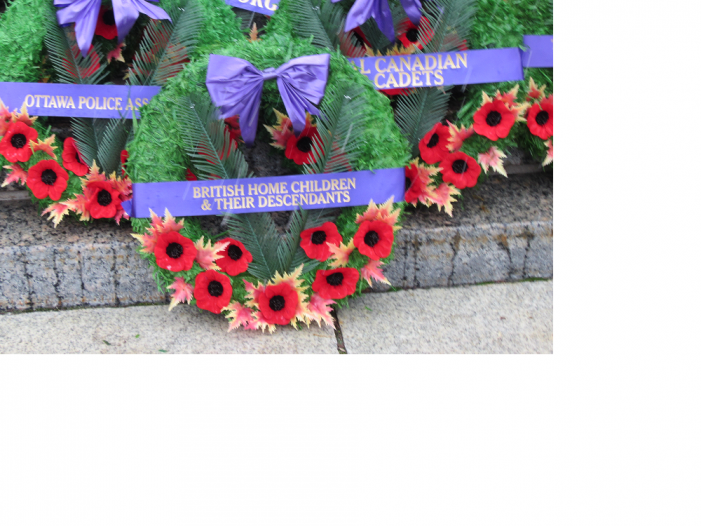 CFN – On Monday, November 11, 2013, a wreath was laid during the Remembrance Day Ceremonies at the National War Memorial in Ottawa to honour the British Home Children and their descendants who enlisted in the Canadian Expeditionary Force (CEF) as well as their descendants who chose to join the Canadian Military Services since that time. The wreath was laid by a representative of the Ontario East British Home Child Family, Gloria Tubman, granddaughter of a British Home Child.
When it was time for me to place the wreath on the east side of the National War Memorial, David Rumball, a retired member of the Hastings Regiment, accompanied me. His knowledge of the protocol was invaluable. Afterwards Rumball thanked me as he could now say he had laid a wreath at the National War Memorial on Remembrance Day in honour of his wife’s grandfather a British Home Child.
Many British Home Children and their first generation descendants enlisted in the CEF during World War I. Some went back to their homeland to enlist in the Royal Military Services directly. A few Home children enlisted in the American Service Corps.
Some British Home Children first placed in the Ottawa – St Lawrence Valley areas before enlisting in the CEF include: Claude J.P. Nunney # 410935 recipient of the Victoria Cross, William John Dominey # 1042925 died at Passchendale, Francis Foreman # 41020 injured in France in 1915 returned to Saskatoon, Saskatchewan in 1919, Herbert Bretherton #639688 spent time in France with Canadian Labour Pool returned to Shawville, Quebec, Charles Reaper # 814924 survived Vimy Ridge died in 2003 in Winnipeg, Manitoba.
There were some 100,000 British Home Children who were sent to Canada from the United Kingdom and Ireland during the period of 1870 to the mid 1930s. A large number of these children were relocated to rural communities in Canada through some 50 different emigration / immigration agencies. These young children, young ladies, and young men became productive members of Canadian society.
The Ontario East British Home Child Family’s mission is to give a voice to all British Home children who walked silently among us. This organization of dedicated volunteers is working to: compile and preserve primary resources, inform and educate Canadians about British Home children, and stage annual events to bring awareness to the Home Children’s stories.
For further information on British Home children and / or the Ontario East British Home Child Family, http://www.onteastbritishhomechildfamily.com/ , please contact the OEBHCF at oebhcf@ymail.com