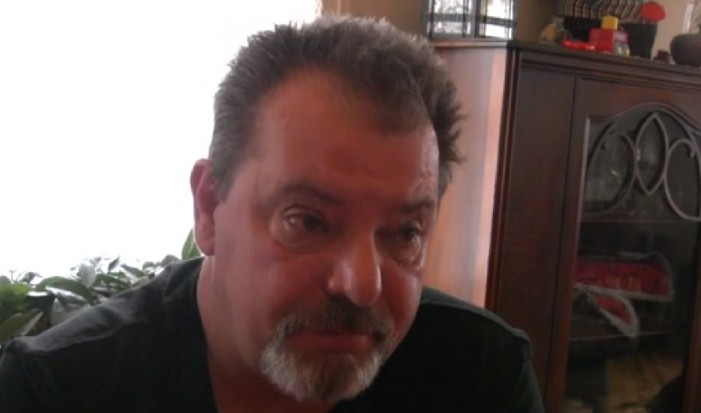 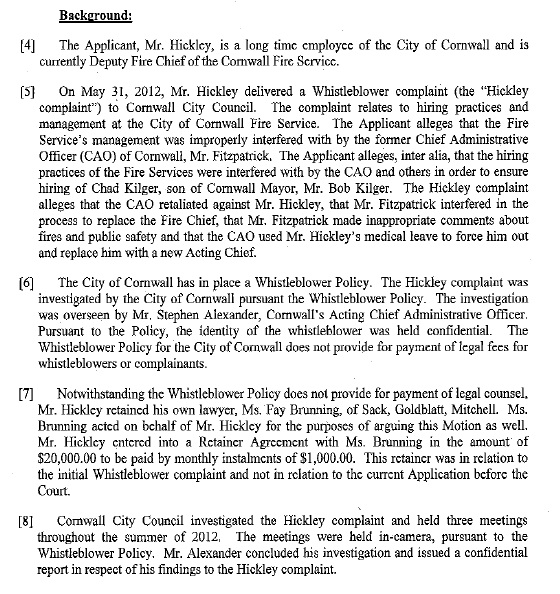 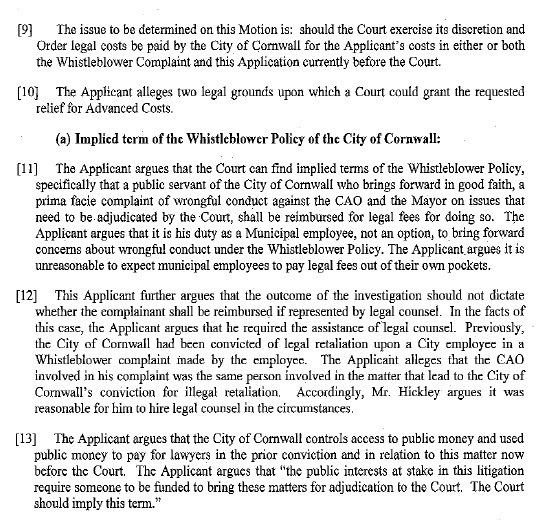 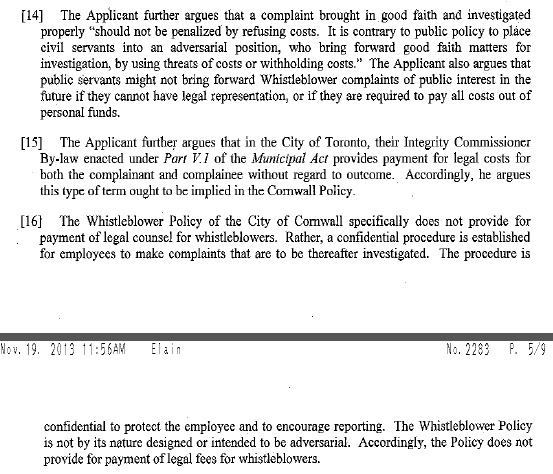 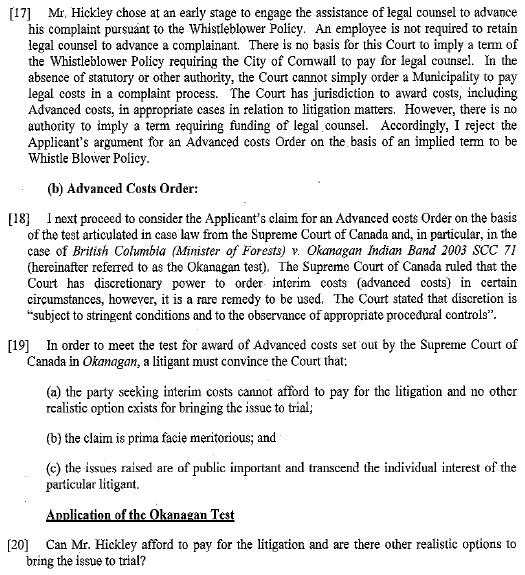 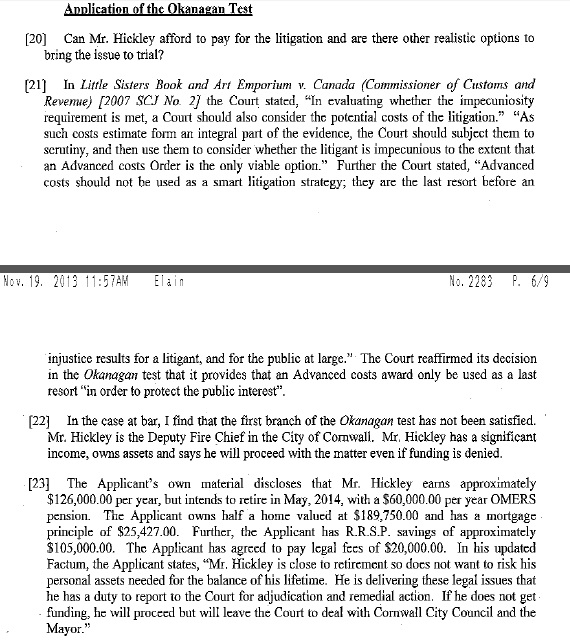 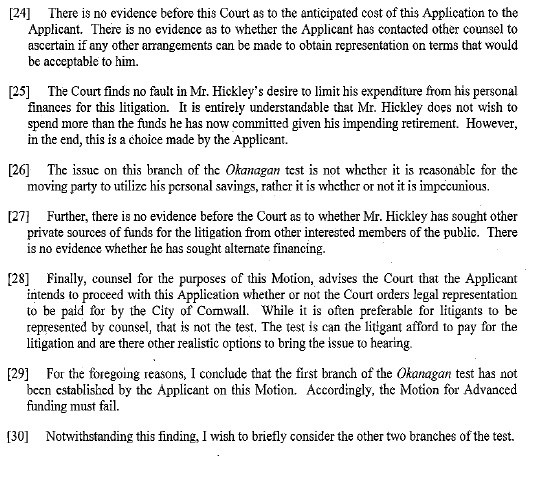 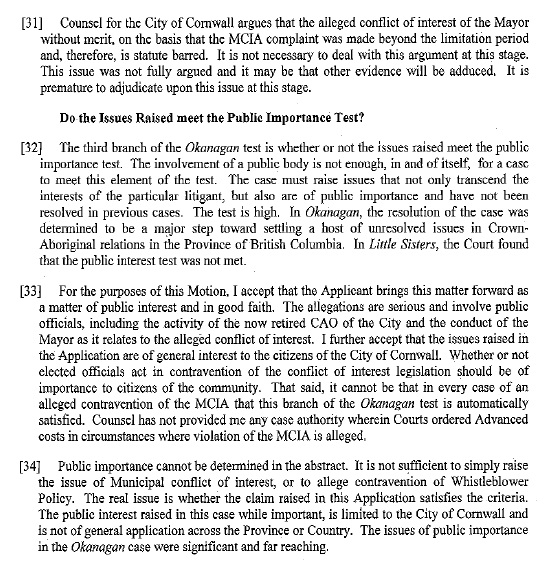 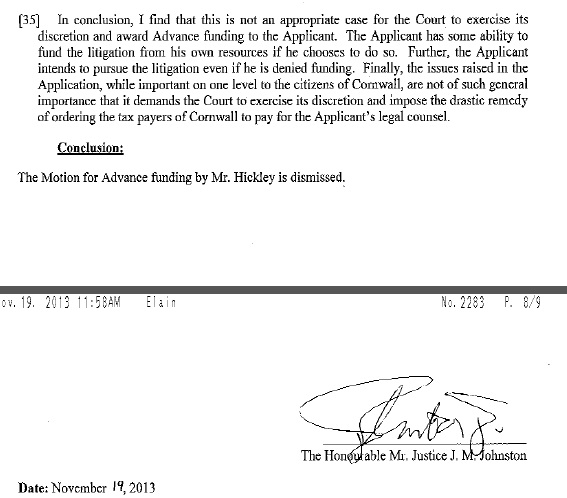 Cornwall Ontario – Former Cornwall Ontario Deputy Fire Chief Rob Hickley sat down one on one with CFN and talked about losing his appeal for funding for his Whistle Blowing case against the City of Cornwall & Mayor Bob Kilger over the hiring of the Mayor’s son as a City Fireman.

It took months for Justice J.M.Johnston to relay his decision which many thought odd.  Some even suggested that this was being politicized from above; but at the end of the day it seems that the verdict was clear from day one.   There is something juicy for conspiracy theorists for the timing of the release of this decision; so close after Mr. Hickley’s own funding issues regarding his long term disability request.

Here are images of the Judge’s decision. It should be noted that during hearings Mayor Kilger’s lawyer; Mr. Cameron threw Mr. Fitzpatrick “Under the bus.” So the argument here is that in a case like this; that could cost nearly $500,000 on each side!   That the City should pay even if it wins. So this all came down to strategy and argument.  In this case Toronto Super Lawyer Will McDowell used the law to block a true investigation into conflict of interest allegations. In #33 the Justice clearly suggested that this incident is in the public interest of the people of Cornwall Ontario.   The Mayor and City were not cleared. In this decision simply the option of funding was not granted by Justice Johnston. What this case really exposes is the fragility of Justice at the Municipal level in Ontario.   Cornwall is not unique as a Toronto Sun story pointed out this weekend  LINK where this very case was mentioned by writer Maddie DuMuccio, herself a councilor in Newmarket.

For example, we have laws on the books that require council meetings to be held in the open. Secret meetings are only supposed to occur for very specific reasons.

Don’t believe me? Read the public reports from the Ontario Ombudsman’s office that outline the worrisome lack of oversight as municipalities abuse the process.

Implementing true accountability — including fines for individual council members when rules are violated — would be a start.

As a city councillor, I regularly use Freedom Of Information requests to gather material I need as matters of public interest come before me.

But each municipality, via their council, as was explained to me by the Information and Privacy Commission of Ontario, decides their own rules for FOI requests.

CFN has had extreme difficulty getting basic information from the City of Cornwall.    Should it take a million dollars in litigation to prove that Mayor Bob Kilger and Paul Fitzpatrick conspired to gain an $80K position for the Mayor’s son, former NHL player Chad Kilger?   No, it shouldn’t.

Should 27 year veterans of the Fire Department have their lives nearly destroyed and have their names abused in the manner that Whistle Blowers have in Cornwall Ontario?  No, that’s a sin.  It’s a crime all unto itself that compounds what some legitimately expose.

Where does this leave Rob Hickley and his family?    At the Abyss.    Mr. Hickley is mulling over a crowd funding attempt to raise money to continue his case which CFN has offered to assist with.   He also may find a legal firm to take this case on Pro Bono; but again at the end of the day when elected officials can use tax dollars to defend themselves even if proven guilty there is no justice in Ontario.

And until the Municipal Act is changed to reflect that tax payers will continue to be abused; lives smashed, and criminal acts continue.

I am indeed disappointed by the Judge’s decision. I do however understand that he is bound to precedents of Law and to protect taxpayer’s money. On the one hand (paragraph 32 and following), the Court did find that the substantive matters I have raised (Mayor Kilger being in undeclared conflict of interest, interference with hiring practices, failure to conduct a proper investigation) are serious issues and of importance to the Citizens of Cornwall. Unfortunately, the criteria did not allow me to access funding to pursue the matter.

According to the criteria by which the Judge made his decision, I must first exhaust all other sources of funding, as well as continue to contribute. The Court is the supervisor of Municipal Councils, not me. I am the messenger. I have done my duty as a public servant to deliver a serious legal issue to the Court. I have spent my own money and have impacted my health. I don’t see it as my responsibility to fund enforcement of the Corporations Whistleblower policy.

I had duties to report violations of the law and/ or corporate policy. I presented evidence that showed Council had paid with taxpayer dollars, the legal fees of Mr. Fitzpatrick, even thought there are no terms to that effect in the Whistleblower policy. The legal fees of the defendants in the conviction for illegal retaliation against Diane Shay were also taken from taxpayer’s money.

A second criteria, that his Honour was required to consider was the public good.

Unfortunately Cornwall is too small a focus. Public good needed to be broader in that it should benefit at Provincial or Federal levels. Little Cornwall is not important enough.

The pressure and stress of this situation has had a negative impact on my condition. My Doctor recommends that I not return to work if I wish to restore my health; representing myself in litigation against lawyers like those representing other Federal and Municipal politicians we see in the news recently, would also worsen my health.

It is now the duty of the Citizens of Cornwall to ensure our Municipal Council does the right thing and votes to refer what the Court has found to be serious issues, back to the Court to investigate. Our Council has that legal option under the Municipal Act. Demand your rights. Ask that the lawyers for the City of Cornwall outline the legal options available to Council and that these legal opinions be made public. Make sure these matters are considered in open Council. Demand accountability. The Court if referred this issue by Council, is funded by the Public.

I am willing to be a witness. Any municipal employees called to testify will be protected by the Court. A completely separate and independent Prosecutor will be appointed.

I feel that I have fulfilled my duties to the citizens of our City. However I have taken this as far as I can. It’s now time for someone else to step up. Otherwise, we can look forward more of the same behaviour we see in other parts of our great country.

LOOK IT UP AND STAND UP FOR YOUR RIGHTS!!

274. (1) If a municipality so requests by resolution, a judge of the Superior Court of Justice shall,

(b) inquire into any matter connected with the good government of the municipality; or

(c) inquire into the conduct of any part of the public business of the municipality, including business conducted by a commission appointed by the council or elected by the electors. 2001, c. 25, s. 274 (1).

(4) The council may hire counsel to represent the municipality and pay fees for witnesses who are summoned to give evidence at the investigation or inquiry. 2001, c. 25, s. 274 (4).

Costs (6) The judge may engage counsel and other persons to assist in the investigation or inquiry and the costs of engaging those persons and any incidental expenses shall be paid by the municipality. 2001, c. 25, s. 274 (6).

CFN 1 on 1 With Rob Hickley On Funding Failure Against City of Cornwall & Mayor Bob Kilger – VIDEO added by admin on November 25, 2013
View all posts by admin →