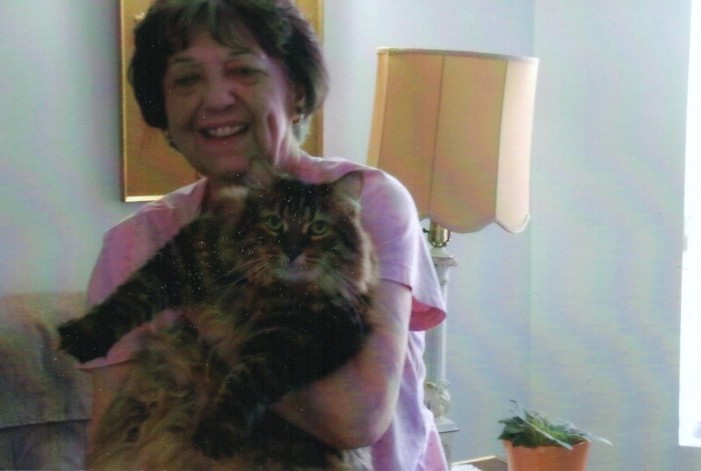 CFN – I don’t know whether to call the Vet or talk to one of my addiction colleagues. My cat Tiger, big big baby, is sniffing celery leaves.

He is no longer content with his ‘pot’ catnip; now he is in ecstasy sniffing celery. What is this?? As soon as I open the fridge door, I feel fur near my foot and there he is in all his glory, furry fuzz face in the celery leaves.

I tried wrapping it in aluminum foil. Didn’t matter. The tiny happy nose is sniffing away at the celery scent anyway. I know celery is good for us humans but is sniffing it good for a cat? Tiger seems to think so. Tiger has his own personality. He really thinks he is a puppy and acts like one, chewing telephone wires, chewing on my leather purse straps, etc. He also likes to follow me around, in case I have something in mind for him. He also likes to precede me, running ahead of me and peeking back to see if I am going in the direction he wants to lead me to, especially to brush him, feed him, play with his ‘pot’ catnip toys, etc. He is also a very affectionate cat and likes to rub my hand as I am putting out his dish of food. I love him dearly.

But there is another aspect to his personality which is a mystery. Since I first got him from the SPCA, Tiger likes to get on my tummy and stay there for as long as he likes, sometimes getting so close as to give me a whisker rub on my nose. One night when I went to bed, he got up on my chest, his eyes that of a sphinx staring into mine with that ‘I’m smarter than you” look or that ala Garfield “Stick with me Baby and you’ll learn something” gaze in his eyes. Not to be deterred from my prayer routine, I started to say my prayers out loud starting with ‘The Our Father’. Tiger began to purr like a motor boat. So, I said all my night prayers out loud and he purred and purred. Whenever I finished he left, as he always does, sooner or later, for a more comfortable spot on the bed, usually crosswise leaving me as little room as possible. Now when I go to bed, and start the “Our Father ‘aloud, he is immediately on my chest. Is it because he thinks I am talking to him or is it something spiritual going on between him and God? If I just talk to him, he purrs but this is a different very loud profound purr. Whatever is going on, he loves it.

I once had a cat who liked to sniff the hose leading to the propane tank on my BBQ. Was she mellow!! ‘Who needs catnip?’ she purred at me? I had no idea how often she had done this until the day I caught her. I had to move the BBQ out of her reach. I didn’t think having her a bit tipsy on Propane gas was safe but she sure liked to sniff it.

Again I am bringing up the subject of lifelines for anyone living alone, whether in your own house or seniors apartments or any dwelling. Recently, a lady I knew, fell on the floor of her home and was laying there for four days until help finally reached her. She died. Could this have been prevented if she had had a lifeline attached to her? We will never know but at least she would have had a chance. Recently in one of the news bulletins there was info on the increasing number of people living alone. Might have to put my pride in my pocket and get one. Some have a special feature that if you fall, it sends a signal to the /provider and help is on its way. But what about the cost? I am going to see if there is any funding available which would help seniors to get one. It could save lives, complications from injuries and health dollars in the end. In my home our security system provider set up a life line attached to our existing system for my husband. We paid for the extra wire but it did not cost any more monthly. I still think anyone’s home or senior apartment building that has a security system in place could hook the residents up with a life line connected to their system. This would provide protection for everyone at a much lower cost.

I had the opportunity recently to spend some time with one of our aging WW2 Veterans. We were talking about things in general when all of a sudden he said that when the sun goes down, he becomes very frightened that bombs might start falling on our homes. I was shocked and heartbroken to hear this wonderful elderly man in so much emotional pain. He talked a bit longer about bombs and our being close to the Seaway and the war and his fears. I just listened. Then we talked about Canada being safe with security systems in place and the fact that we had allies to the south but I could sense that his pain was very real and very present.

Was he suffering still at this point in his life, from Post-Traumatic Stress Disorder that is in the news frequently these days? I went on the Web to look at this malady and found on one of the sites, a self-test. The first question is: ‘Have you or a loved one experienced or witnessed a life-threatening event that caused intense fear, helplessness or horror? I am sure all of our Veterans would answer yes to that question alone. All the more reason why they need all our Government and Social resources at their disposal, all our support, help and love to-day. I saw some young soldiers returning from duty in Afghanistan on the TV recently. They were kissing their babies and loved ones. We need to be there for them, so that when they are living their lives, having given so much of themselves for our country, they won’t worry about anything, or about what is going to happen for their future, now or in their twilight years, especially about being frightened when the sun goes down.

I was in a new restaurant in Cornwall recently and was happy to see on the menus a warning about food allergy concerning nuts. I always ask anyway because of my food allergies but this time, I didn’t have to ask .I had to leave unfortunately but that is safer than not knowing, especially with those darn nut allergies. There are quite a few restaurants here where I can’t eat. I went into a restaurant a few months ago where they did not use peanut oil in the past in the cooking. Out of habit, I asked the waitress if they still did not use it. Apparently, now they do. So, I had to leave. If you go to Tim Horton’s, there is a big sign about food allergies and one at the Deli at The Independent Grocer. These warning signs makes it easier and safer for those of use with food allergies.

Armchair /Wheelchair Tai Chi classes are in swing at the General Vanier High School, 1500 Cumberland Street, on Tuesdays and Thursday afternoons at 3pm. Please contact Ryunoishi Tai Chi if you want any other info at 613-360-0892. Introductory lessons are free.

Here’s a bit of humor to brighten your day:

His older brother leaned over and nudged the younger brother and said,” Why are you shouting your prayers? God isn’t deaf.” To which the little brother replied, “No, but Gramma is.”

Seniors Situation Room by Dawn Ford – Tiger By the Tail Likes Celery added by admin on February 9, 2014
View all posts by admin →