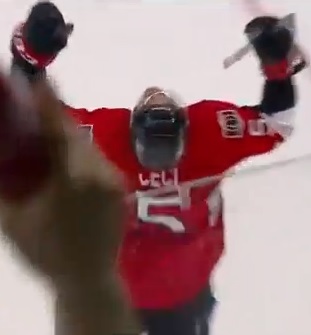 CFN – Cody Ceci is a young and talented Ottawa Senator’s player.  A first round pick only two years ago the team called him up last year to help stabilize a D corp that was missing Sergei Gonchar.

Ottawa has lost its soul within a year.  Daniel Alfredsson is gone.  Jason Spezza is gone.   GM Bryan Murray is fighting cancer (wishing him and his family the best) and the team is saddled with an artificially low budget just above the cap floor.

In the Cap world we tend to look at three year cycles.   The best cap teams have that mix of top dollar top talent and then entry level contracts with some value veterans salted in.

Looking at Capgeek.com, Chicago for example has four forwards earning over $5M for 2014 and two D men at that price point.

The team has value vets like Brad Richards agreeing to play for one year at $2M and Brandon Saad playing at $764K.

With the upcoming raises to Toews and Kane the team will have to offload some salary; but for this season they’re in the race.

LA, who just won the cup, are in even better cap shape.   They also have four forwards over the $5M mark, but only 1 Dman in Drew Doughty.

Ottawa gets to ride Kyle Turris $3.5M contract until 2018; but he no longer has Spezza around to spread the coverage.   David Legwand was a great value deal at $3m for two years; but after that going down the middle is Zack Smith and the big question mark that is Mika Zibenejad who will have every opportunity to bloom this year.

Bobby Ryan will be coming back from surgery and is UFA.    It should be interesting if the team is willing to spend to resign and commit to him or if they simply will trade him for assets?   He certainly will see tougher D against him as he’s easily a target to key on with the make up of the Sens roster.

Ottawa has a lot of young entry level contracted forwards that might get some ice time.  Mike Hoffman should see some ice time.  Will the Sens give Curtis Lazar a year in the Bing or break him in at the NHL?  Mark Stone also has a shot to play and Alex Chaisson, part of the Spezza deal is still only at $866K.

Erik Karlsson may be the highest paid Sen for quite awhile.  Ottawa’s highest salary on D after his is Jared Cowen at $3.1M.    Patrick Wiercioch should get more ice time this year.

Craig Anderson is in his UFA year and depending on how the Robin Lehner negotiations go will most likely be shipped out or resigned.  After all, Ottawa did bring back Milan Michalek on July 1.

Ottawa didn’t have a first round pick in the draft last year.   Their draft pick next season might end up being in Connor McDavid territory?

What do you think Sens fans?  Where will the team end up at the end of the year?  Are they better or worse after the Spezza deal?  You can post your comments below.