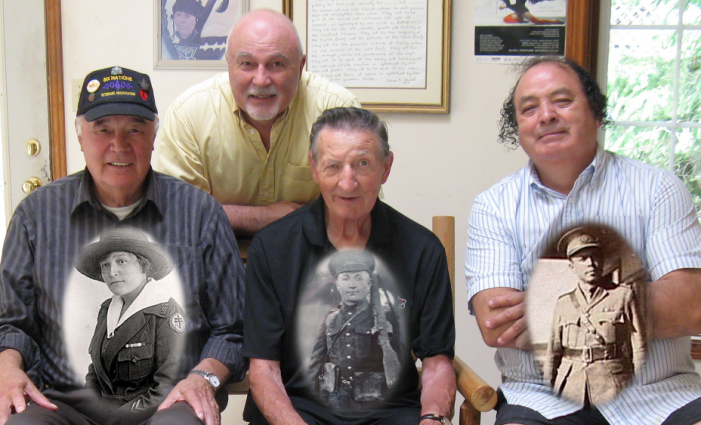 CFN – Don, Walter and Steve; I’ve known these three wonderful senior citizens for many years. In fact all four of us are over 67 years of age. I’ll let you guess as to who is the youngest and who is the oldest. Please be kind.

There is a common thread between us and the image set into the chest of each one of my friends is a clue. You of course would be correct if you guessed World War One, and there is actually more.

Edith Anderson, Don and Ron’s (twins) mom, were born in 1890. As a First Nations person she was not allowed to become a nurse in Canada so she went to the United States, became a nurse, and in 1917 ended up in France near the front line trenches. She administered medical care to both the allies and the enemy.

Tony (Gretcki) Gretzky, Walter’s father, was born in 1892. After immigrating to Chicago, U.S.A. from Belarus he travelled north to Toronto Canada and joined the Canadian army. He fought his way to Mons Belgium when the war ended in 1918.

Steve’s grandfather, A.G.E. Smith (father of Jay Silverheels), was born in 1875. He was an officer in the Canadian army and trained Polish troops at Niagara on the Lake. He fought in Europe and was wounded.

My father was born in 1916, two and one half hours from where Walter’s father was born. He was only two years old when Edith, Tony and A.G.E. Smith suffered through the horrible trench warfare during World War One. My family and the Gretzky family were caught between Germany’s trench warfare on the western front and the Russian Revolution on the eastern front.

My research indicated that Edith, Tony and A.G.E. were mainly within a few hundred kilometers of each other along the meandering, muddy and death filled trenches of the war. I often wondered if the six degrees of separation applied here and whether or not, during the erratic troop movement, they walked by one another. Did their eyes ever met?

After the ‘war to end all wars’ Edith Anderson returned to the Grand River Six Nations where she would marry, become a Montour, and continue nursing. Walter’s dad remained in Canada, got married to Mary, and eventually bought a farm property along the Nith River. Steve’s Grandfather, who was already married, retuned to his farm along the Grand River on the Six Nations.

It was only 21 years later, September 1939, when World War Two broke out. Poland was smashed on the west and on the east by the overwhelming, merciless and powerful armies of Germany and Russia. Once again Canadian and First Nations men and women volunteered and were shipped to Europe. Over 60 million people lost their lives during this brutal conflict and over 37 million dead or wounded in World War One. Many of my European family were killed or sent to Siberia as was the case with the Gretzky family. Many from our surrounding communities, died in both wars.

The 100th anniversary commemoration of World War One is this year, 2014. Wherever our ancestors were during that conflict and no matter what they were doing to stave off evil acts of others we can all say from our perspectives that ‘We fought for your freedom and ours’.

Zig Misiak is retired and has co-authored a Native Studies guide now used in 622 schools as well as having  published 3 books all with a Native focus.

More info about me can be found on my web www.realpeopleshistory.com under ‘About’.