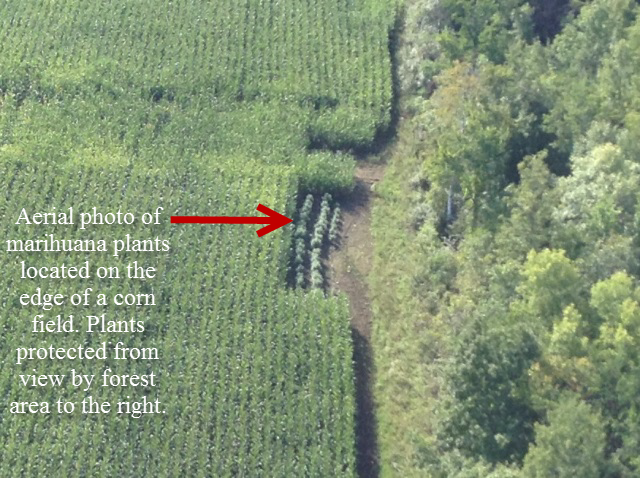 CORNWALL Ontario – Between September 8 and 11, 2014, the Cornwall Regional Task Force (CRTF) and the Canadian Armed Forces (CAF) collaborated on a marihuana eradication project named SABOT. This year, this project covered the areas of Stormont, Dundas and Glengarry counties as well as the Prescott-Russell counties.

Project SABOT is an annual operations helmed by the RCMP and the CAF. The project targets and eradicates outdoor marihuana grow operations during the outdoor cultivation season. The project’s objective is to seize the crops prior to harvesting, which contributes to reducing the availability of marihuana within our communities. Through the use of aerial patrols, with the assistance from concerned citizens, outdoor marihuana grow operations are located and eradicated.

“Our overall goal is a safe Canada. Illegal marihuana use and the criminality that surrounds it harms individuals and communities”, stated Inspector Tim Kimpan, Officer in Charge of the CRTF, “This proactive strategy impacts the activities and financial benefits of organized crime.”

Since 1989, the CAF have supported Project SABOT by providing aircraft and surveillance equipment, along with personnel to operate the equipment. Over the years, patrols conducted under this operation have resulted in many arrests and the destruction of hundreds of thousands of marihuana plants.

“The Canadian Armed Forces are committed to supporting other government departments in ongoing efforts to protect Canadians and their interests,” said Brigadier-General Lowell Thomas, Commander Joint Task Force (Central). “By working closely with the RCMP on SABOT, we’re reinforcing to Canadians that we are vested in their safety and security.”

The following law enforcement agencies assisted the CRTF and the CAF in this endeavor: the Eastern Ontario Provincial Police (OPP) Drug Enforcement Unit (DEU), the OPP Emergency Response Team (ERT), the Cornwall Community Police Service (CCPS), the Akwesasne Mohawk Police Service (AMPS), Ontario and the National Capital Region’s Emergency Response Teams, and members from the Kingston and Ottawa RCMP Detachments. As a result of this cooperation, a total of 1,743 marihuana plants were seized. CRTF Does a Little Farming in Cornwall Ontario – Aerial Weed Finds 1,743 Plants SABOT added by admin on September 18, 2014
View all posts by admin →