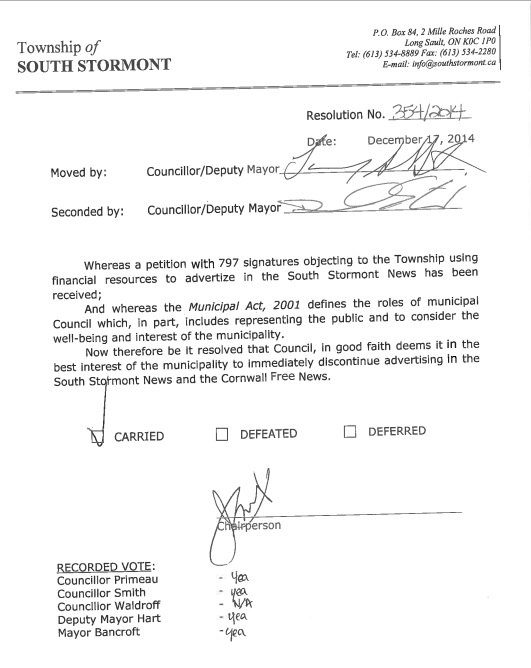 CFN – Well that was an interesting and anti-climatic council meeting in Long Sault.

The new council under Comrade Tammy Hart decreed to kill advertising on both The South Stormont News and Cornwall Free News.

At no point in our service to the township had we had any complaint regarding our service or product.

The motion stated that it was in the community’s best interest, but the community clearly liked it’s own print edition.

Ms Hart, who campaigned on transparency squealed about council accepting the bogus petition that she and her merry hate group members submitted, but that petition was not submitted in open council. Councilor Waldroff emailed us asking if SSN was for sale and recused himself from the vote last night, but councilor Smith, who still hasn’t answered about his alleged criminal record/pardon not only seconded the motion and voted, but is in gross conflict of interest as he runs a competing media that solicits advertising in South Stormont, IE he had a fiduciary interest in killing the ad to competing media for local ad dollars.

And thus begins the term under Mayor Hart (yes, we know she’s the DM, but we also know who has who on a leash)  Likewise Donna Primeau, who actually took money to run the Farmer’s Market in Long Sault and killed an essential contra ad deal with CFN saw attendance plummet after we stopped our weekly reports of market activity.    She too had a clearly prejudiced position that should have most likely required her to declare her own conflict.

Ms Hart thanked Rick Currier who ran for council missing by a scant few votes, but the reality is that Mr. Currier, Ms Hart, and several in attendance, you can hear them clapping, participated in a hate group that conspired to kill the South Stormont News, essentially to dislodge former Mayor McGillis and install Ms Hart’s “slate”.

The petition mentioned had signatures from people from outside of South Stormont and many were lied to and strong armed into signing.  Lies like taxes would go up 10% in the township were told to some that signed.

Or this bizarre speech from new mayor Jim Bancroft.

Deputy Mayor Hart was sanctioned by Integrity Commissioner Robert Swayze after releasing a memo stating that SSN was to get loans and start up money something that was never discussed or requested.

In fact she railed at the health clinic financing yet screeches about supporting Quebec owned (TC MEDIA) Seaway News over the Ingleside based SSN which was costing the township 20% less.

Of course facts and truth matter little to most of those supporting her position, all of whom actually campaigned against the South Stormont News. It’s sad times for the township as there are a lot of upset people at what she and her team have done to the community.    SSN will continue with our digital edition at www.Southstormontnews.com and while there will not be a December issue of our print edition there may be one in January.

The irony that SSN and CFN were the only media to cover many events in South Stormont is clear as is the interest from competing media once SSN was created including those in attendance last night.