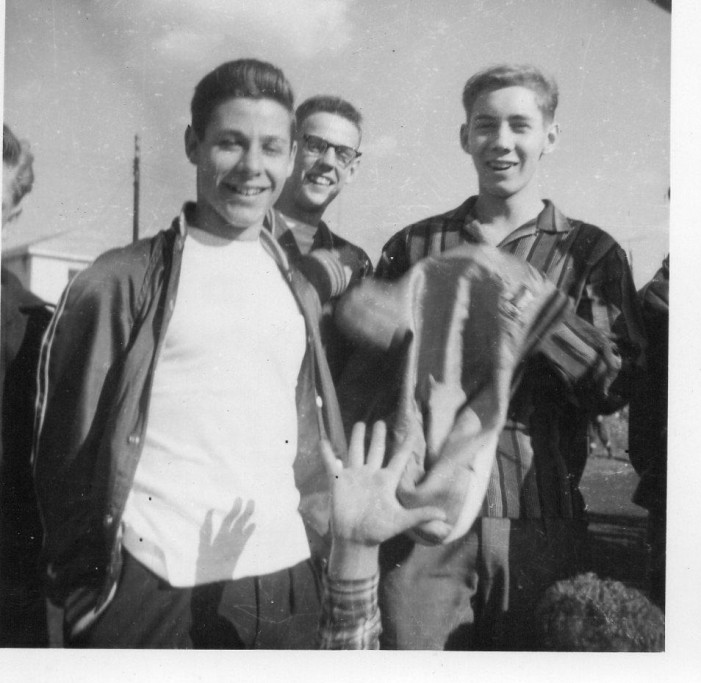 CFN – A couple of years ago, I was called to an elderly friend’s apartment because she wasn’t feeling well. I assessed that she was indeed having a heart attack and called 911.

She insisted I change her nightgown which was soaked with perspiration and get her girdle for her because she didn’t want to go to hospital without wearing it.

I was able to gently change her nightgown but there was no way I was putting a restrictive girdle on her. I stalled her by telling her that we could wait and see if the Paramedics thought it was ok. They arrived in what seemed like only seconds and took charge. They didn’t give her the girdle either.

As they were taking her out on the stretcher she winked and whispered to me that both male Paramedics were very handsome. How sick does a seventy-eight year old have to be to not noticed two handsome guys?? lol . So I jokingly said to them, “Watch her!! She’s HOT'”. They laughed and so did she, which told me she was going to be ok. And, apart from a new but mild heart condition, she was fine.

When people do loving and kind things over and above what is required of them magic can happen. Even miracles. This is what happened when a couple of Paramedics in another city some time ago, concerned about a few of their clients who called 911 often, decided on their time off to pay them a friendly visit and just check to see how they were.

This is way beyond the ‘call of duty’. They continued to do it. Here are some Paramedics who have busy lives of their own and have a lot to do and yet, care so much about the people they serve as Paramedics. Doesn’t get any better than that.

Miracles did happen. The rate of 911 calls decreased dramatically apparently.

Now in some thirteen cities in Ontario there is a new Paramedic project in operation called ‘Community Paramedicine’. We have had this service in Cornwall since January of this year. Funding is provided by the Ministry of Health and Long- Term Care until July although they are hoping to stretch it to the fall and seek new funding. A team of eleven Paramedics, specially trained are available to visit the people at risk and those who call 911 often. This will be done on a referral basis.

Reminds me of the old days when our doctors made home visits.

My editor Jamie and I met with the project co-ordinator Michelle McMillan and two Paramedics, Pascale Ricard and Randy Lalonde . Here is a video of our meeting and their explanation of the service:

I was impressed as I listened to these three people on how enthusiastic they are about the project and the results that have happened with lower rates of 911 calls already. Michelle is also so enthused about this project’s ability to address the needs of our most fragile residents.

Pascale talked about the fact that this team of Paramedics are specifically trained to take in details such as mental health, safety ,or nourishment issues which are so important to the client’s well being and future needs.

Randy talked about the fact that each client has a history of being a person, valuable to our community and how important it is to let them know how they are still matter despite age or illness.. I could sense how much they care about the clients well being.

I happened to be in the downtown area one day and a bit hungry, so I moseyed into The Grill Hutt at 10 second Street West. After ordering my usual eggs and bacon, I noticed a sign on the wall which said ‘Seniors. 1 egg, choice of meat, 1 toast, home fries and coffee or tea $3.99. Wow. What a bargain. The coffee is great, served in a big generous mug. The staff were very friendly with good service. Nice place for a good breakfast or lunch.

Whenever I have eggs in a restaurant, I never have the potatoes because it is too much for me to eat. At the Family Corner Restaurant the other day, I noticed when I got the bill that the waitress had written ‘no pot’ on it. Just for fun, I went to Henry the manager and showed him the bill and said the waitress said I couldn’t have any ‘pot’. We had a bit of fun over that one.

The restaurant was beautifully decorated for Easter with decals of little chicks, eggs and bunnies. I had teased Henry about only having one Teddy Bear with all his Christmas decorations. This Easter he had many stuffed toys of Bunny Rabbits of all sizes and colours. Really nice for the children, I thought. However, a couple of my friends, ladies my age, were commenting on the bunnies and which one they particularly liked. Guess that five year old inner child never grows up. I must admit though, that I kind of liked the brown bunny myself.

I wish we had some way of forming as fund to help seniors with their vet bills for their pets.

When you start getting ‘over the hill’, I guess that is the way it is despite all the glamorous face creams and stuff to make us look younger. When I took my aging car in for maintenance the mechanic said that with only about 30,000 k on it, it would probably last me the rest of my life. I said to him, ‘How old do you think I am????’….Better get some new creams, eh?? Here are three and a quarter lads from CCVS at a football game in the late 50’s. Left to right is Sydney Horowitz, Tim Phillips and Jack Murray. The hand you see reaching up and the curly hair at the right hand bottom of the page belongs to Ron Goodfellow who obviously is fooling around on the ground. Handsome guys, eh?? Those were the days!!

A man and a woman were having a quiet , romantic dinner in a fine restaurant. They were gazing lovingly at each other and holding hands. The waitress, taking another order at a table a few steps away, suddenly noticed the woman slowly sliding down her chair and under the table – but the man stared straight ahead. The waitress watched as the woman slid all the way down her chair and out of sight under the table. Still the man continued to stare straight ahead. The waitress, thinking this behaviour a bit odd and worried that it might offend other diners, went over to the table and tactfully began by saying to the man, “Pardon me, sir, but I think your wife just slid under the table.”

The man calmly looked at her and said, “No, she didn’t. ..she just walked in the door.”