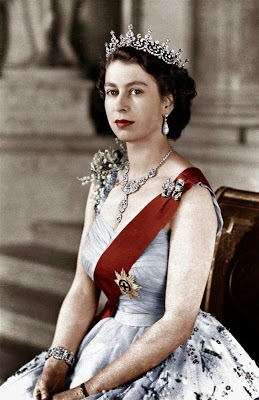 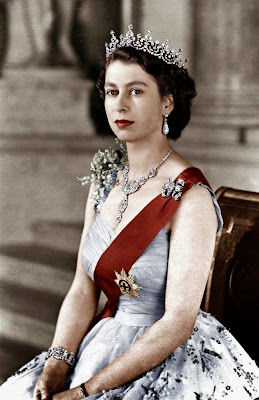 Growing up in a Commonwealth country, it was customary in grade school to rise every morning, turn to a portrait very similar to this one, and beg to the Almighty that this woman not only be spared, but live an extraordinarily long time at the top of her game. It’s amazing the power of suggestion coming out of the mouths of babes. For here we are, decades later, and Elizabeth Alexandra Mary, of the house of Windsor, is still going strong as Queen Elizabeth II.

This has been quite a year for her. She once again became a great-grandmother, after the birth of Princess Charlotte Elizabeth Diana on May 2nd. If you’re tallying up offspring, The Queen has four children, four grandchildren and five great-grandchildren. With the addition of Charlotte, who’s now fourth in line to the throne (bumping Prince Harry down to fifth) future succession to the monarchy is quite secure. Not that she really needs them.

Now, some nitpickers might question that date. That’s because they like to technically start a monarch’s run from the date of their Coronation, which in the case of Elizabeth was on June 2, 1953. But remember, a monarch automatically claims the throne the minute their predecessor assumes room temperature. In the case of the 25-year-old princess’ father, King George VI, that was February 6, 1952 (it must be bittersweet to realize the anniversary of a lifelong gig also coincides with the death of a beloved parent).

For well over 60 years now, Queen Elizabeth has been a pillar of strength to her loyal subjects, and she really doesn’t show any signs of slowing down. While surpassing her heralded ancestor is indeed an amazing feat, one might foresee this Queen could possibly rule forever. Just think about other milestones she could hit. In 2017 there will be people officially hitting retirement age who will not have known any other Monarch. In 2026, she could be the first Monarch to hit 100!

Plus the chain reaction of a Royal Highness who is high in years brings new meaning to the term “elder statesman.” When the day comes that she is no longer with us, her son Charles, the world’s longest serving and oldest intern, will reach the throne. And as of this moment the grandfather of two is, at 66, one year past retirement age, still waiting for his job.

That got me wondering about those who followed Victoria. When she died in 1901 her son, King Edward VII, got the high chair at age 59, still younger than Charles. He reigned for less than a decade before his son, King George V, took up the mantle in 1910 at the age of 44. George V lasted a little over a quarter century, leaving the throne open for King Edward VIII in 1936 at the age of 41. But he abdicated in less than a year to run off with that American home wrecker, the twice divorced Bessie Wallis Warfield Simpson.

That action caused a shift in lineage, and in a monarchy that always likes to have “an heir and a spare,” the “B” team took up the mantle; with the current monarch’s father, George VI, becoming King in 1936, three days shy of his own 41 birthday. He ruled for only 16 years as his health declined. To hear his wife Elizabeth (later the beloved Queen Mum) tell it, a combination of her brother-in-law’s abdication for “that woman” and World War II, hastened her husband’s death (I’m willing to bet that if you could talk to the Queen Mum in the afterlife and you spoke fondly of Mrs. Simpson, you’d end up with at the very least, singed off eyebrows).

So that brings us back to our long reigning, globetrotting, extremely healthy Monarch who clearly isn’t gathering any dust (although her kids are). As someone who was born six years after her reign began, I have not known any other Monarch and I’m beginning to wonder if I ever will. Elizabeth II clearly has the stamina of the Energizer bunny. She could be around forever. But I can’t help but wonder if the secret to her success is the collective prayers of six generations of Commonwealth grade-schoolers who started each day in class praying for her longevity and salvation. You can’t underestimate the power of children. God Save The Queen! Peter Anthony Holder is a Montreal based Writer & Broadcaster.   You can check him out on his website, blog, or on weekends on Global TV!

Queen Elizabeth II set to Break Longest British Monarch Record in September by Peter Anthony Holder MAY 15, 2015 added by admin on May 15, 2015
View all posts by admin →