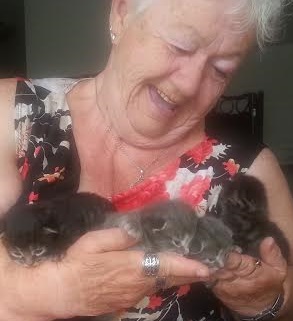 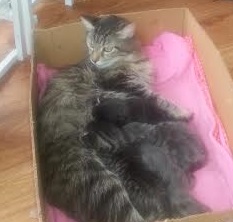 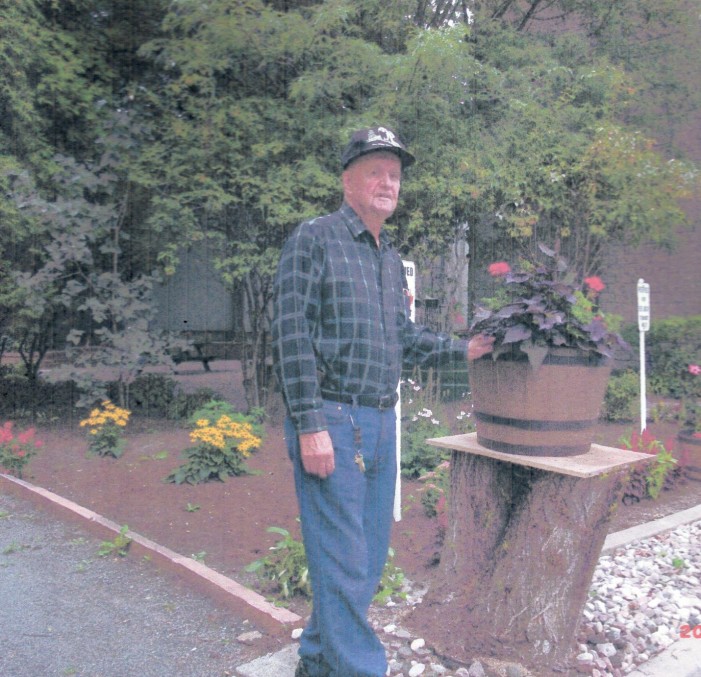 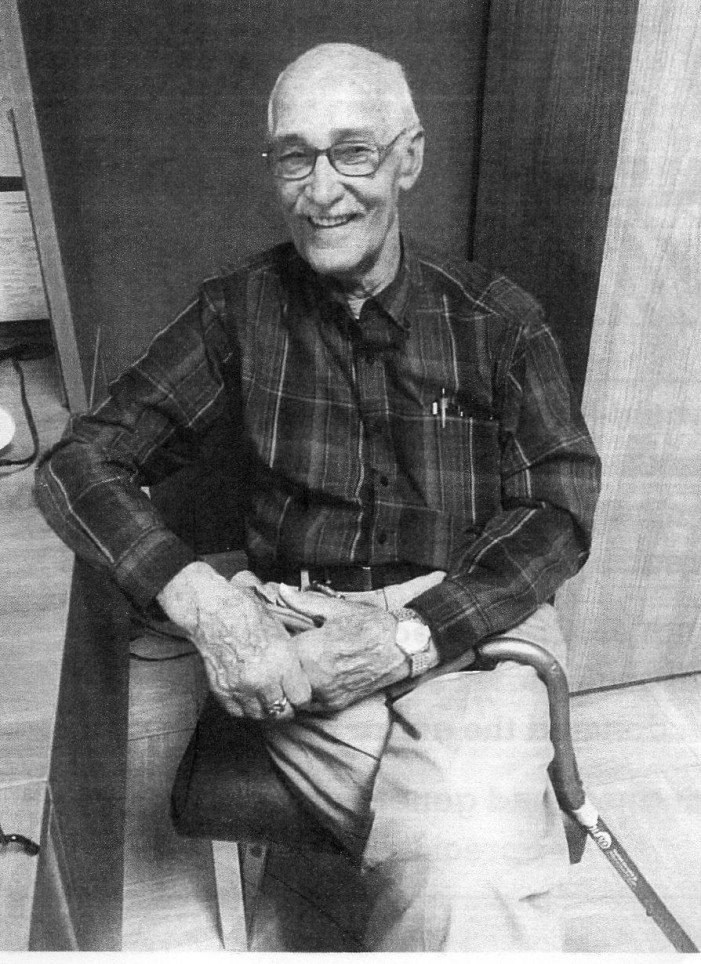 There is a new Maternity Ward in the Beek Lindsey Seniors Residence. New births include Quads. They came with their own little fur coats. You guessed it: four little baby kittens. Mother ‘Dakota’ and babies are doing well. expected. Pat adopted Dakota a couple of months ago, not knowing that her new young female cat was pregnant.

She noticed recently though that the little cat’s tummy was getting a bit bigger and one day, four little baby cats were born.

There are three ‘Lillys’ and one’ Tom’. They are just over two weeks old and their little eyes are opened.

Absolutely adorable. I guess they will be up for adoption in several weeks.

And flowers are blooming around the Residence also. With that beautiful green shade of grass that only comes in the spring, lilacs are perfuming the air and perennials are sticking up through the earth. Ernie Appleton, their volunteer gardener, has been raking and bagging mouldy old leaves since early spring. As soon as that chore was accomplished, he was soon digging and hoeing in the flower beds getting them ready for planting. Now he has planted beautiful flowers making a gorgeous array of colours around the property. It is starting to look very lovely around Beek Lindsey on Augustus Street, thanks to Ernie’s hard work. Kudos Ernie for once again bringing so much colour and beauty around the Residence. Another wonderful senior in our community. June is Seniors month and here is a favourite senior of mine, Beatrice Tardif ( nee Stang) , known to her friends and half of Cornwall, as’ Bea’. Bea was born in Green Valley, Ontario and attended Iona Academy in St. Raphael’s. Bea is an avid history buff of the Glengarry County.

Bea was married to the late Raymond Tardif and she has had three sons, the late Andre, Jean Pierre ( JP)and Francis. She has five grandchildren whom she loves dearly.

Bea worked at Woolco and Walmart Pharmacies for 37 years .People who were customers of the pharmacy tell me that she was always helpful, kind, patient and very pleasant. Whenever you go anywhere with her, you have to give yourself a bit more time because someone is usually stopping and talking with her, often former clients of the pharmacy who want to have a chat. Reminds me of being with my late brother Sonny Herrington who seemed to know half of Cornwall also.

Bea is a natural and beautiful artist. When I first met her in the eighties, it was painting that brought us together. We used to go to McCormick’s Art Studio every Tuesday night for years taking painting lessons. I needed them but she always seemed to know what to do on her own.

She likes to travel, read and is an avid walker. She is an excellent cook as well. Her stew is the best I have ever tasted. I love it when she calls me and says that she is having stew for supper and ask if I want some. You bet! She is a gracious hostess and nothing seems too much trouble when she is preparing her meals.

Bea is an active member of St. Columbans Parish.

She is writing her life story, not for a best seller but to give her children and grand children a history of her life. Wonderful gift from a wonderful lady.

Another well known senior is Ray O’Collin. I had not actually met him or so I thought when I saw a tribute to him as Volunteer of the Month for May in the Seaway Seniors Citizens Club Newsletter. I knew I had seen him somewhere. But where? Maybe Hospice?? Then I remembered seeing him around the Club when I took guitar lessons there a few years ago. I remembered how pleasant he was. A Montrealer, Ray was on the police force in the Montreal area for thirty years. He said that he moved to Cornwall in 1999. Montreal’s loss; Cornwall’s gain. Recently he celebrated fifty-five years of marriage with his bride and love of his life, Norma. They have two children.

Ray likes to read and travel and is a busy volunteer at Hospice, the Cornwall Community Police and for twenty years has been a member and volunteer at the Seaway Seniors Citizens Club. The Club says he has a wonderful sense of humour and they are very appreciative of everything he does for them at the Club. Kudos Ray for being such a wonderful asset to our community.

My cat Tiger, big big baby, is also a big big pest. He is probably going soon to a farm as a barn cat or it will be me going to the Funny Farm. This week when I was changing his cat litter tray, he was lying on the floor outside the door as usual supervising.

Just as I was pouring the old cat litter into a garbage container, something suddenly brushed my leg. A bit startled, I moved and the used litter went all over the floor. It was him, of course. Then he started pacing up and down with an ‘I got to go, Ma’ performance. Didn’t he have all day to ‘go’?? So I rushed with the cleaning of the tray , put new litter in it and stuck it out in the hall. And sure enough, he was immediately in it , digging and scratching some of the new litter onto that floor when I hadn’t finished cleaning up the mess on the other floor yet!! Why do cats do that? I know they want to cover stuff up but couldn’t the Momma cat teach them to ‘aim’ better?? Guess I will be going to the Funny Farm very soon.

Kudos to Sharon Simonelis of Lancaster who has helped some seniors in a big way recently. They appreciated it very much.