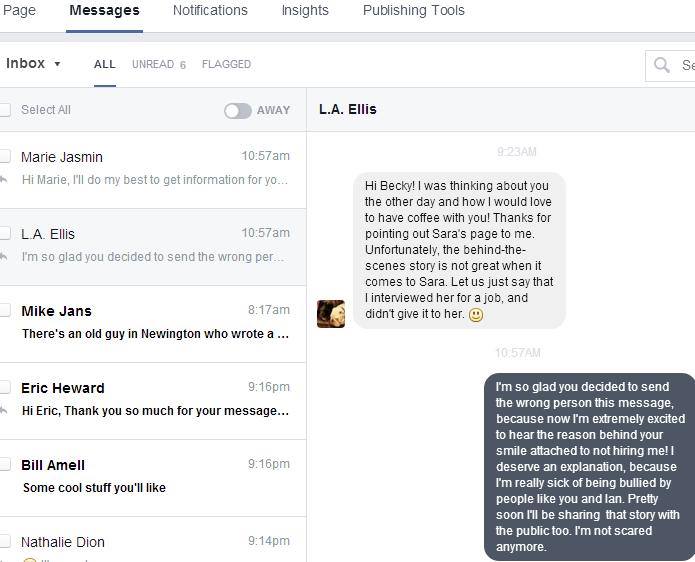 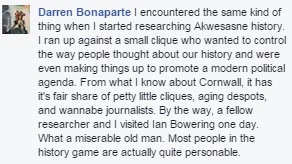 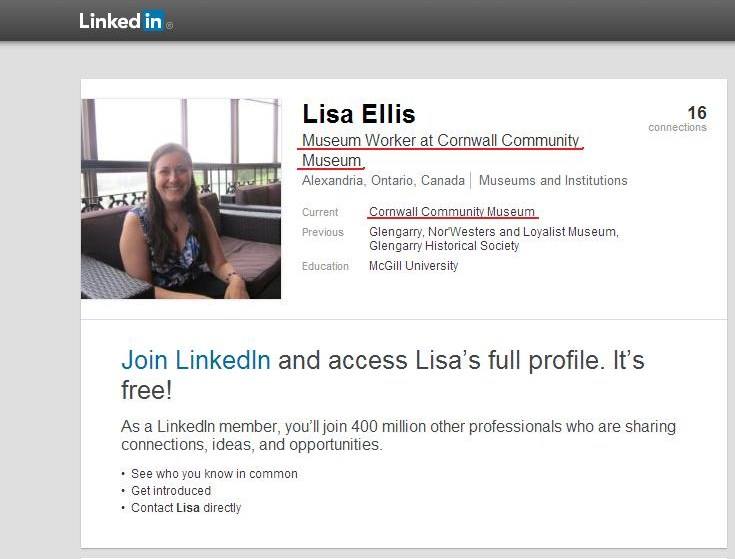 Lauzon, 25, is a history grad who has not been able to attain a job in history here in the River City.  There aren’t too many available.  With the Community Museum curator Ian Bowering nearing retirement the two people whose names get mentioned are Lauzon, and retired CCPS officer, broadcaster, and author Thom Racine.

To my followers, and to those who believe in Cornwall’s History;
Without prejudice

Many friends and confidents have told me, “leave it alone Sara, you are better, and you will do wonderful things one day.” I trusted them and still do, but today, I am standing up for myself. I am finished being bullied for what I believe in!

I received a message today that infuriated me. It was sent to me unintentionally, but if this person can take so much pride in not hiring me, I’m going to take pride in spewing the hell they’ve put me through for the last three years.

For the last ten years, I’ve been researching Cornwall’s history. I wanted to tell the world about some of our city history that I was discovering. At first it was difficult, not many doors opened for an excitable teenager. I stayed the course and with the help of some history minded people, Judge James O’Reilly was remembered in the very courthouse where he died in 1929. I began to use social media in 2013 to promote the city the best I could by digging up local history, stories, and sharing my historic pictures. I have lectured over 30 groups in Cornwall and SD&G, and spoke in front of my peers at the University of Ottawa several times. Last summer, I was interviewed by Canada’s History magazine, and not long after, I was interviewed by CBC Radio, not once, but three times. My project to recognize the history of our ‘House of Refuge’ is well documented, and in June of 2016, a tombstone will mark the 29 graves of former residents of the facility. In December of 2014, after applying, I was selected to the City’s Heritage Committee board, a group of history minded people who have a vision to preserve our area history.

I am 25 years old, I get excited about discovering our past, and I am certainly not shy to express myself. This is where I broke the mould. Instead of hiding history, I exposed it through social media.

I worked at the Cornwall Community Museum in 2013. It was the greatest job I’ve ever had to this point. I had never felt like I belonged somewhere more than I did that summer. I loved my job so much, the idea of leaving for University was actually painful. I asked the curator if I could keep working (on weekends, because I was attending University in Ottawa) until November, which I was able to do. While employed at the museum, I created this page in September of 2013. Shortly afterwards, the curator made a claim that I was using, and in effect stealing pictures from the Museum’s page. I scanned pictures and postcards from my own collection, I don’t need to steal anything. My Cornwall history collection has taken over my bedroom. It is piled floor to ceiling with boxes of papers and pictures, that you and many others have given to me.

It was discused and agreed upon that I would be returning for a second summer at our museum, and when I inquired about my start date, I never got one. This was the curators way of blackballing me from my dream job because he didn’t like the fact that I had this page. I’ve applied to the museum many times since, and I was told over and over that “there were no positions available.” But, the very person in this inadvertently sent message is now working at Cornwall’s Museum.

So I have to ask, and need to know: Why am I being bullied? Is it because I am proud of our history and I’m not afraid to show it? Is it because I wont stay quiet when I have something that I think needs to be shared? I am young and I have plenty to learn, but right now, I’m finished being bullied. If people are talking about me in emails and messages, and can’t get it straight as to who they are sending them to, then I have earned the right to rant about this and expose this. I am finished being silent about it. I deserve an explanation, and I hope it is understood that I am not going anywhere.

Lauzon’s experience isn’t unique.   The local public art gallery had its funding cut to zero, and the 35 year charity is is about to face closure due to “local politics” as well.

While nothing Lauzon mentions in her diatribe remotely is bullying, it clearly shows the way politics can impact how things are done in our community.

Many of our local “institutions” in Cornwall are not run remotely to the spirit which is how they can get so political with boards protecting friends at the public’s expense and young people being either turned off because of the lack of opportunity based on merit; or worse, leaving for better pastures.

Sadly this is extended to City committees and board appointments with the Lay Committee  which is comprised of:

Refusing perfectly good choices while seeing relatives (Carolyne Hebert’s mom for example) getting seats is sadly the norm instead of the exception. Even our friends in Akwesasne experience some of this according to Darren Bonaparte.

The problem is that the key “Alphas” in these control cliques rarely are stood up to which only emboldens the monsters.

In Cornwall it’s come to encompass everything from education & healthcare, to CAS, and area charities.   Frankly it’s unproductive and a huge factor in why our city can’t crest the 50,000 mark.

Mix in a large amount of young people leaving and a large amount of seniors retiring to the community without knowing the who’s who, and you get a recipe for corruption and cronyism.    Toss in a dollop of media that look the other way at risk of losing clique generated ad revenue and you have our current situation.

While going public may not ultimately benefit Ms Lauzon; enough of these incidents going public just might help the community.

Ms. Lauzon answered with a “no comment” when asked to offer a statement.  L.A. Ellis & Ian Bowering had not responded as of publication time.

Lauzon runs a website www.Saraloveshistory.com where she posts images and material of yesteryear.

L.A. EllisJamie, as a journalist, I am sure that you understand that there are about a million sides to every story. As to what has gone on with Ms. Lauzon regarding her employment status, I have no idea. I was alerted to this post by someone. I understand that Ms. Lauzon is having a bad day, but this is a public page. 1. She applied for a job at a Museum NOT in Cornwall that was funded by a grant that she did not get due to a BOARD decision, on which I was ex-officio. I no longer work there 2. I have never even met Ms. Lauzon out of that environment. 3. Before I had seen this post, I had written to Ms. Lauzon offering to help her with research methodology and citations for her work. 4. I have nothing against Ms. Lauzon and wish her the best of luck. I feel though, somehow, that I have been caught in the middle of something larger and that I truly do not deserve this kind of defamation. Thank you.

Ms Ellis has stated that the museum in question that Ms Lauzon interviewed with her was in fact not in Cornwall.

Ms Lauzon has not responded to our query to confirm that.

Sara finally responded publicly to clarify some of her statement.

Sara Lauzon To clarify, Lisa Ellis interviewed me last summer at the Nor’Westers and Loyalist Museum, in Williamstown. My issue did not lie with her until she decided to inadvertently send me a message addressed to “Becky” talking about me. (I have no idea who Becky is, or why they would be talking about me at all, when as she told you, Lisa and I have only met once – During that interview.)

My issue has nothing to do with “not getting a job.” I reacted to Lisa Ellis’ message because she is now associated with the Cornwall Community Museum and frankly, I am sick of being treated so poorly for simply trying to do some good in our community.