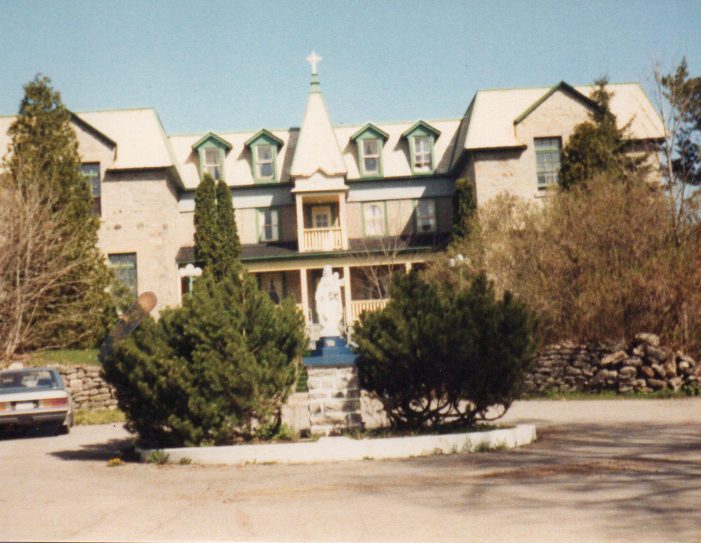 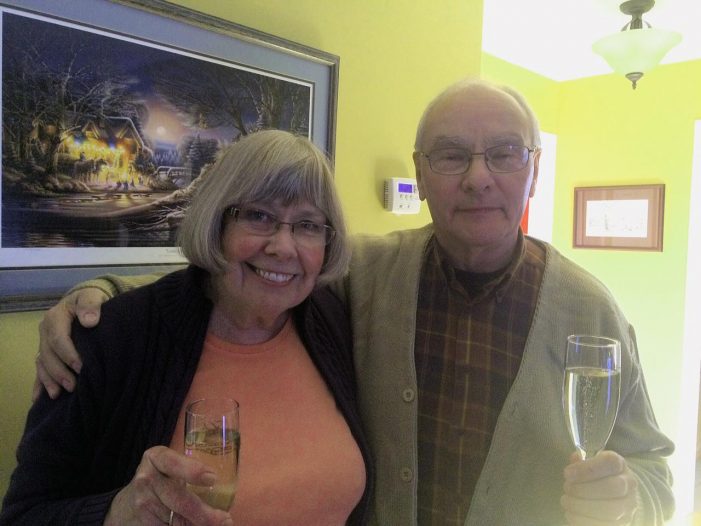 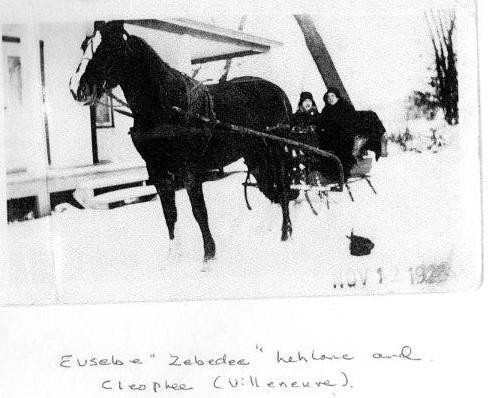 There will be a fundraising dinner for the restoration of the Bishop’s House in St. Raphael’s on April 16th. Cocktails at 5:30 and dinner at 6pm. It will be held in the Char- Lan Recreation Center in Williamstown. and will be hosted by the restoration committee, The Glengarry Fencibles Trust. Cost is $60 per ticket but as of Thursday afternoon, only a few were left. What a wonderful tribute that is to the hard work of this committee.

They have been working for ten years to safe this historic building, built in 1808, which was headed toward demolition a few short months ago. And now, after much negotiation, as of March 30, the papers were signed and new ownership registered on March 31. Our admiration and gratitude to this great group, the Fencibles Trust committee, for their tireless work to save, and now restore the Bishop’s House. Let’s get behind them and offer our support.

David Anderson, a well known historian of the Glengarry area will be the guest speaker. An auction will be hosted by Flora Dumouchel. Sounds like a wonderful evening.

I asked Dane Lanken of The Fencibles Trust committee why they called it ‘Fencibles’. He explained that it was to honour the regiment, The Glengarry Fencibles of the War of 1812. What a wonderful idea and tribute. I ‘goggled’ in the word ‘Fencibles’ on the Internet and the story of the regiment is there to read. Very interesting. The Bishop’s House in the days of Mount Carmel House Treatment Center.

Mount Carmel House Treatment Center for Alcohol and Drug Abuse was housed in the Bishop’s House from 1981 to 1996. I worked there from 1982 until it closed. It was a house of miracles. Many times I heard a resident say, “I was close to death before I came in here. If I had drank again, I would have died.” Lives were saved with the MCH program which embodied the spiritual 12 steps of AA, and families were helped to be restored.

It was a very spiritual place and often people would say, ‘There is something about this place…you can feel it’. It was true. Past residents said to me so often, “I am so grateful I went through the program at Mount Carmel.”

My Program Director for a few years was Sister Simone Lefebvre of the Holy Cross Order who had taught at the girls’ school in previous years when it too had been housed in the building. She said that it was like a second home to her. She was wonderful to work with and a very special friend. We were so lucky to have had her.

We were lucky to have another person as well. In the early days of MCH, Walter Green was our maintenance man. He was always nice to our residents, all of the staff and was lots of fun to work with. Walter liked to sing Country- Western and Spiritual songs. If you were entering a room you might hear someone humming. It was usually Walter in the room fixing something and humming a tune. Walter left us for his Heavenly Home recently. Thanks Walter for all the fun and wonderful memories.

In the spring there is Awe and Wonder all us around as we watch the unfolding of this new refreshing season. I love that beautiful light green shade of grass and leaves that is only here for a short time before the hue deepens. Buds will be visible on the trees and soon we will be sniffing the wondrous odour of lilacs in the air and admiring the wonderful pink blossoms on the flowering crab apple trees. Tiny tulip shots are visible pushing through the earth already.

I was taking some grapes out of package and this tiny little green thing fell on the counter. I thought it was a minute bug but as I picked it up, I realized that it was a wee grape…a baby grape. It was smaller than any pea I had ever seen, maybe an 1/8 of the size of the smallest pea, if that. I have seen small grapes before but not this small. It was perfectly formed. Awe and wonder again.

It has been over seven years since I left my house. This time of year makes me wish I was still there. Lots to do in the spring but happily no snow to shovel or ice to worry about. It is so great to be outside raking old leaves, getting flower pots and beds ready for planting flowers and finding nuts the squirrels hid in your flowerpots last fall. Birds are everywhere and the squirrels running around the yard again. Bumble bees buzzing here and there.

We had a screened in back porch which was heaven all season long , even to some late fall days. Sometimes a wasp, bumble bee or the occasional fly would pop in through the opened screen door. I kept a ‘bug jar’ handy and after catching the little visitor in it, I would let it go free outside. It was great to watch them fly away. Bet they were glad too.

We had an in-ground pool which I had to learn to take care of. Jean Doherty, owner of St. Andrew’s Pool Chemicals in Riverdale at the time, came and showed me what to do. What a blessing she was. I also learned to fish out toads and squirrels from the pool, most of them doing a frantic ‘dog paddle’ to keep breathing until they were rescued.

There was a filter basket with a lid that had to be emptied because it would fill up with leaves and sometimes a poor struggling little mouse. Not that I like mice but you hate to see a creature struggling to breathe. On the odd occasion, they didn’t make it. I was fairly ok with the mice but then someone told me there could be a snake in the basket sometimes. That finished me!! I put a string on either side of the basket and kept the string ends outside with the lid covering the top.

One day when I took the lid off, a little frog ‘s leg was caught on a tiny fibre of the string and he was breathing hard, trying to get out. I didn’t know what to do at first. I ran to the house and got my smallest scissors and said a frantic prayer to St. Francis. Luckily the fibre was loose on his leg and somehow with one snip, I was able to cut that tiny bit of string and the frog was free…no damage done. I still think an Angel cut that string. I don’t think I could do it again although I had had a lot of practice with wee snips having had to cut tiny little fingernails of infants on Paediatrics in the old nursing days. I got him out of the basket and he hopped toward some bushes. Then he turned around and looked at me, then hopped into the bush. I think he was saying thank you. A very special Awe and Wonder moment for sure. Sharyn is the owner of Sharyn’s Pantry in Cornwall and one of my favourite entrepreneurs. She is always gracious, and friendly. Happy Fiftieth Wedding Anniversary Sharyn to you and your husband Gary from all your happy customers.

Here is something you might not see for awhile. A couple in a horse and buggy. This is a photo dated Nov. 1923 of my Mom’s maternal grandparents and my great grandparents, Eusebe “Zebedee’ Leblanc and his wife Cleophee Amyot-Villenueve. He was born in 1844 in Deux Montagne Vaudreuil, PQ and she was born in 1846 in Raquette River, N.Y. How did they ever meet?? They were married in 1872 in St. Bernard Parish Church, Fournier, Prescott County. One of their daughters, Marie Louise married Amedee Andre Tardiff in 1902 and had 9 children. Their daughter Alberta was my Mom. You find out lots of interesting things in Genealogy and some surprises too like this wonderful old photo.

The Family Restaurant at Pitt and Ninth Streets was cheerfully decorated for Easter with lots of bunny rabbits, chicks and Easter eggs. There were two cute little old hens wearing fancy old fashioned hats and shawls that were adorable and cute tiny little brown bunnies. Even a little white woolly lamb..all stuffed toys. The waitress put a little yellow toy duck on the table which was wearing scuba diving goggles. She pushed a button on his wing and he started ‘movin’ and a groovin’, singing “Splish Splash”, that wonderful old Bobby Darin song. It was so cute and funny that we laughed out loud. We pushed the button again and laughed some more as he sang: “I was a splishin’ and a splashin’, rollin’ and a strollin’, a reelin’ with the feelin.” We had danced the jitterbug and ‘Mash Potato’ to that song when we were teens.

It brought back some memories of lots of fun songs of the 50’s and 60’s like Monster Mash, The Yellow Submarine, Itsy Bitsy Teeny Weeny Yellow Polka Dot Bikini, The Flying Saucer, The Purple People Eater, Yakety Yak, Who Put The Bomp in the Bomp Bomp?, Alley Oop, Wooly Bully, Does Your Chewing Gum Lose Its Flavour On the Bedpost Overnight?, Hello Muddah, Hello Fuddah….and many others. And who could forget Frankie Laine’s: “Yi-pi-yi-ay Yi-pi-yi-o!!.. Ghost Riders in the Sky”!! Lots of fun songs to remember again.

Paul Newman founded the Hole in the Wall Gang Camp for children stricken with cancer, AIDS and blood diseases. One afternoon, he and his wife Joanne Woodward, stopped by to have lunch with the kids. A counselor at a nearby table, suspecting that the young patients wouldn’t know that Newman was a famous movie star, explained, “That’s the man who made this camp possible. Maybe you’ve seen his picture on his salad dressing bottle?”

“Well, you’ve probably seen his face on his lemonade carton.”

An eight year old girl perked up.” How long was he missing?”