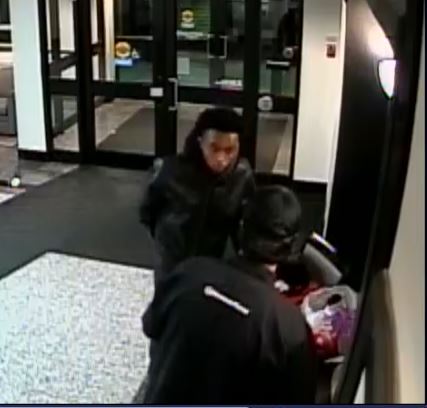 Suspect sought in robbery of delivery driver on Medhurst Drive

(Ottawa) — The Ottawa Police Service Robbery Unit is investigating the November robbery of a fast food delivery driver and is seeking the public’s assistance in identifying the suspect responsible.

On November 6, 2016, a driver attended a building situated along the 100 block of Medhurst Drive with a food delivery. The lone male suspect attended from outside the building and was let into the lobby by the driver. The suspect then produced a handgun, demanded the food, and fled. There were no injuries.

The suspect is described as being a black male, of average height & build, with black curly hair. He was wearing, at the time, a black shiny leather jacket, with a black hood, possible grey hood under the black hood, dark pants, black shoes with white soles (images attached.)