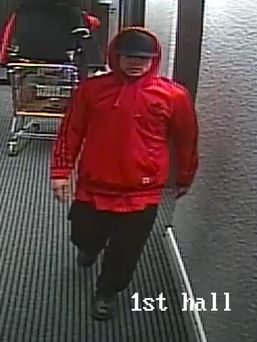 (Ottawa) — The Ottawa Police Service Break & Enter Unit is investigating a recent break & enter to an apartment building and is seeking the public’s assistance in identifying the suspect responsible.

On March 22, 2017, a lone male suspect attended an apartment building situated along the 1000 block of Castle Hill Crescent. The suspect attended at two separate times. On the second visit, at approximately 11:00 pm, the suspect stole an appliance from a common area and used a grocery cart to transport it from the premises.

The suspect is described as being a Caucasian male, approximately 35 years of age. At the time of the first entry, he wore a dark vest over a grey jacket, and on the second entry he wore the vest over a red hooded jacket. He was also carrying a Lulu Lemon reusable bag during the first entry to the building (images attached.)