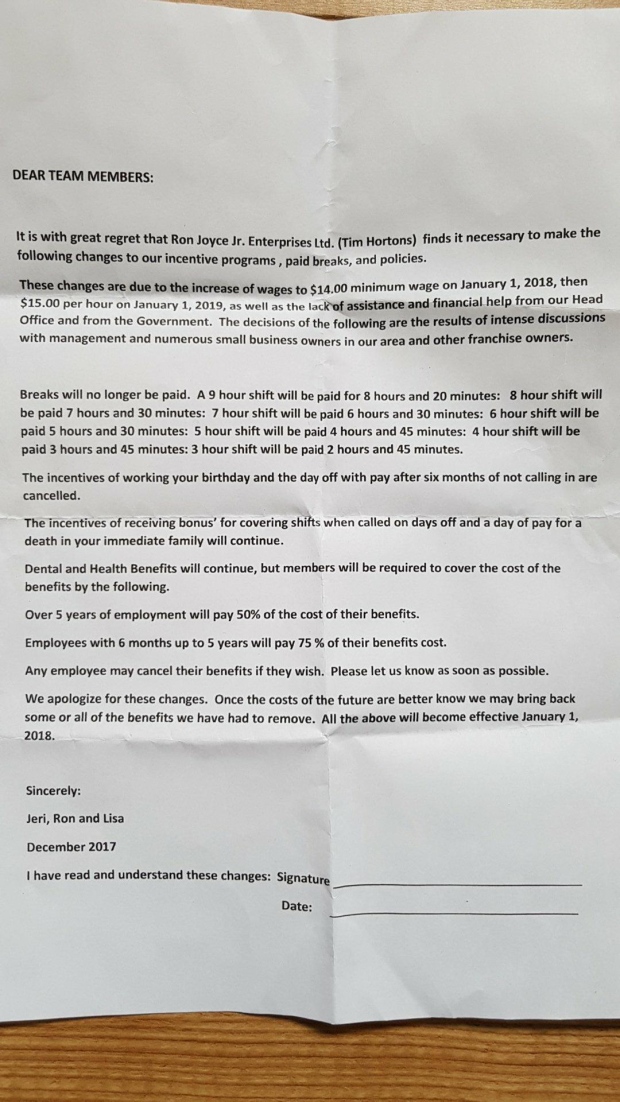 Cornwall Ontario – Letters like the one above are being shared locally.

Our inbox has been filled by local workers upset at being penalized for issues that they feel they have not contributed to or had no say in.

Some employees say that they will actually take home less after the adjustments.   Several said they’re hoping to unionize after what they termed “a slap in the face”.

No local McDonalds or Starbucks workers have shared similar draconian and punitive actions.

Tim Hortons has seen their market share take a beating locally as people are taking their caffeine addictions to Starbucks and McDonalds since both have pushed hard into the market.

Many area eateries are having to adjust after Ontario drastically raised its minimum wage.

Editor’s note:  The Moyer family were not contacted for this story as they boycott this newspaper, the largest in their market, in a prejudicial manner.

Clarification: Our earlier version of this story stated that most of the local franchises are owned by the Moyer Family.   One of the Moyer family phoned us today and shared that in fact not all are owned by the family.  We apologize for any confusion this may have caused.  Michelle Matos said that none of her stores are implementing these Draconian penny pinching actions.

Calls for Boycotts of Tim Hortons After Penny Grubbing on Employees by Jamie Gilcig 010318 added by admin on January 3, 2018
View all posts by admin →