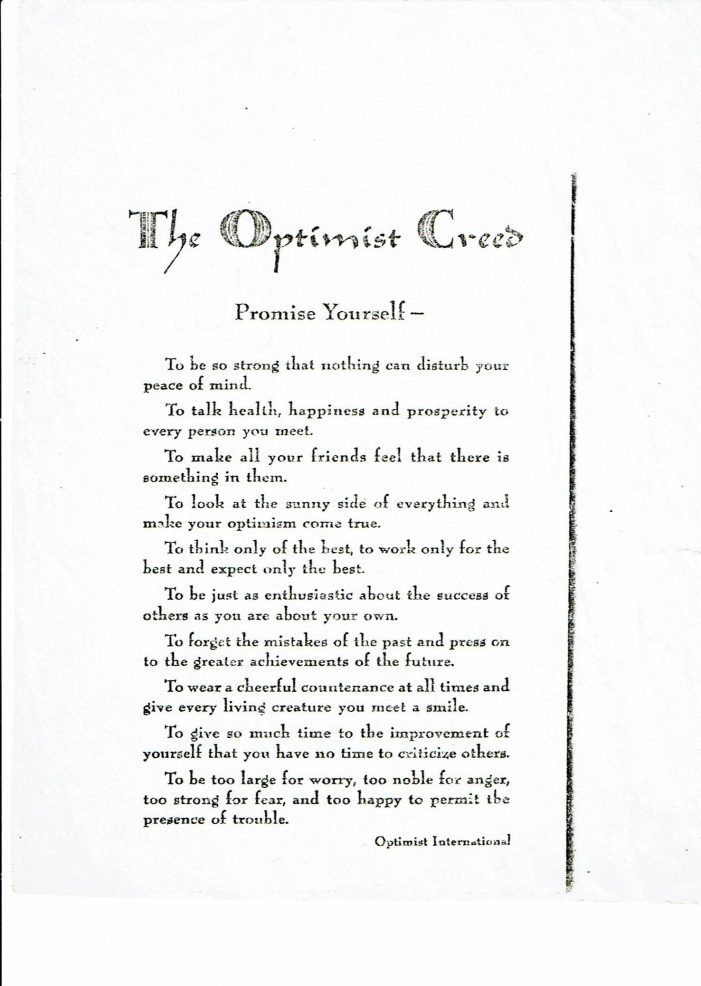 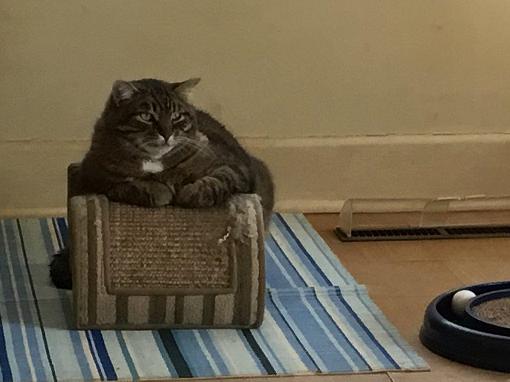 The Optimist Creed is very inspiring. I
happened to come across a copy of it recently in some papers.

We are fortunate in Cornwall to have a
local Optimist Club which was chartered in 1948. According to their
web site, the late Norm Ross was the chapter President. There were 59
charter members at that time. They are currently 26 members and new
members are welcome.

The site notes that the club has been
serving the Youth of Cornwall since the time of its first charter.

Their activities and projects over the years have been many that have helped our community ranging from fundraising for various organizations such as a recent gift to the Cornwall Community Hospital of $25,000.

They also give bursaries to the local High Schools, donate to the Cornwall Treatment Center, Hospice, Big Brothers and Big Sisters, Relay for Life, The Children’s Aid Society among others.

They have sponsored football and hockey
teams for many years and the site says that their Cornwall Optimist
Minor Ball Hockey league has been in operation for over thirty years.
They also have a minor softball league.

According to their web site, The
Optimist Club constructed the Optimist Sport Center which is used by
the club for meetings and sponsored youth and sports activities, Girl
Guides and is available free of charge to youth organizations.

The hall is apparently also available
for rentals such as Baby Showers, Wedding Showers and Family
gatherings. How lucky we are in Cornwall to have such an incredible
organization.

They renamed the clubhouse ‘ The Bud
Guilbeault Youth Center’ after Bud’s passing in 2010. He had been a
member for almost 50 years and the article cites him as’ a true
visionary’.

To contact the Optimist Club please call 1-613-362-3101 for general information. They are located at 301 Sunnyside Ave., Cornwall.

How about a TV remote control that is user friendly for seniors and others?? I hear many complaints from people who say it has too many buttons and they often push the wrong ones accidentally. I have a small control 7″ inches long with 39 buttons one of which turns on and off my TV.

I have a large one 9″inches long with 60 buttons one of which turns on or off the TV cable box.

I have to admit that I do not have any idea what most of them they are for. Sometimes I have pushed one by mistake and on the TV screen it says that I am now recording. Then it says to push some other button to stop it recording if you don’t want it to do that but I can never find the right button and when I do, it is by chance or I have to turn the whole thing off.

Sometimes it still is on when I put it back on. One time I had to call the cable company because I couldn’t get the recording thing to stop. My VCR/DVD player is not plugged in until I want to use it so why does it come on saying It is recording!!!

The buttons for the TV guide are helpful to know what is on later. I haven’t messed them up… yet but I am careful with a lot of the other ones. Yes, we could use a smaller remote with less buttons for sure.

February is Heart and Stroke Month. It
is a time not only for fundraising but also to raise awareness of
the heart and stroke problems which can be of higher risk for
individuals with an unhealthy diet, physical inactivity, unhealthy
weight, smoking, stress and excessive use of alcohol and drug use.

Early warnings of a heart attack
include shortness of breath, chest discomfort, nausea, sweating and
may also include discomfort in other parts of the body such as back,
neck or jaw. Call 911 right away for help.

The word FAST can help us remember more
easily the signs of a stroke such as:

A brochure on stroke symptoms said that
the faster you act the more of the person can be saved.

In Cornwall, call the Heart and Stroke
Foundation’s phone number is 613-938-8933 for more information.

An article in a recent newsletter by
Dr. Andrew Weil says that dancing is healthy for women. Japanese
researchers apparently did a study over a period of 8 years of some
1,003 women who were without any disabilities when the study started.
They were assessing 16 types of exercise. They found that 13% had
developed some form of disability. They found that the women who had
participated in dancing had a 73% lower likelihood of developing
disabilities that affected their lives. Guess we better start
dancing!!

Go to:
https://www.drweil.com/blog/bulletins/why-dancing-is-healthy-for
-women/?utm_mediu…. for more info about the study.

I saw a little boy in a store recently with his finger up his nose. His mother was telling him to stop it. Reminded me of when we were kids and did that. I remember one kid in public school who did it in class and if he could get , what we called , ‘the little buggers’ out of his nose, he ate it.

Gross!!! l wonder why we called the little bits of dried mucous “buggers”?? He was the same kid who used to often eat the dried glue on the rubber tips of the mucilage bottles. Not exactly glue sniffing – eating!!! But..he was back in school the next day -” no worse for the wear”!!!!

When I first got this photo of my sister’s cat Rocky, I thought he had posed for it.

Apparently Rocky sits like this on his
scratching/sleeping post a lot of the times, even sleeping on it in
this position. Just lowers his head on the top of it and goes to
sleep. He can scratch his nails on the front of it and curl up and
sleep in the back. Looks like he prefers sometimes to sleep ‘on it’
instead. That’s a cat for you!!! So cute.

Here are some historical facts sent
in by a reader ( years unknown) :

1) Most people got married in June
because they took their yearly bath in May, and they still smelled
pretty good by June. However, since they were starting to smell,
brides carried a bouquet of flowers to hide the body odour. Hence,
the custom today of carrying a bouquet when getting married.

2) Baths consisted of a big tub filled
with hot water. The man of the house had the privilege of the nice
clean water, then all the other sons and men, then the women and
finally the children. Last of all the babies. By then the water was
so dirty you could actually lose someone in it. Hence the saying,
“Don’t throw out the baby with the bath water!”

3) The floor was dirt. Only the wealthy
had something other than dirt. Hence the term, ‘dirt poor.’ The
wealthy had slate floors that would get slippery in the winter when
wet, so they spread thresh (straw) on the floor to help keep their
footing. As the winter wore on, they added more thresh until, when
you opened the door, it would all start slipping outside. A piece of
wood was placed in the entrance-way. Hence, ‘a thresh hold.’

A drunk staggers into a Catholic
Church, enters a confessional booth, sits down but says nothing. The
Priest coughs a few times to get his attention but the drunk
continues to sit there. Finally the Priest pounds three times on the
wall.

The drunk mumbles, “Ain’t no use
knockin’. There’s no paper on this side either!”