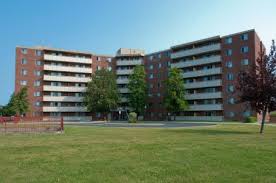 Social media was buzzing about a bloody attack in the Lorneville Apartments in Cornwall Ontario.

Reports of thugs in hoodies and a bloody door frame.

Calls to the Cornwall Police Service have led to no disclosure or confirmation of the incident.

If you have information about this incident please email your photo or video to info@cornwallfreenews.com.

We will be updating as more info becomes available.

The police gave a statement to CFN. The Desk Sgt at first denied the event occurred.

Cornwall, ON – On October 7th, 2019 at approximately 3:00 am, the Cornwall Police Service was called to investigate a robbery at 1430 First Street East. It is alleged that individuals entered the male victim’s apartment and struck him with a handgun and assaulted him with a weapon. A handgun was also pointed at the victim, while money was being demanded from him. The individuals further removed a quantity of electronics and Canadian and American currency before fleeing the apartment. Police and paramedics subsequently attended the area. It should be noted the injuries sustained by the victim were not life threatening in nature and the incident is believed to be an isolated occurrence where the parties are known to one another.

At this time, the matter is still under investigation. Two individuals have been taken into custody and charged accordingly in relation to the offence. Jose Acevedo Ovando, 20, of Cornwall and Kimber Lee Long, 25, of Gatineau, were charged with the following:

Kimber Lee Long was also charged with breach of probation for failing to keep the peace. Both individuals were taken into custody on October 7th, 2019, charged accordingly and held for a bail hearing.