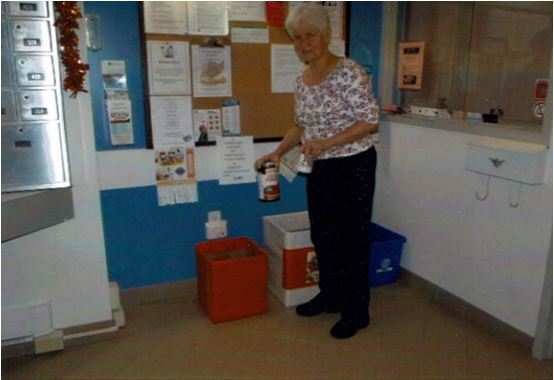 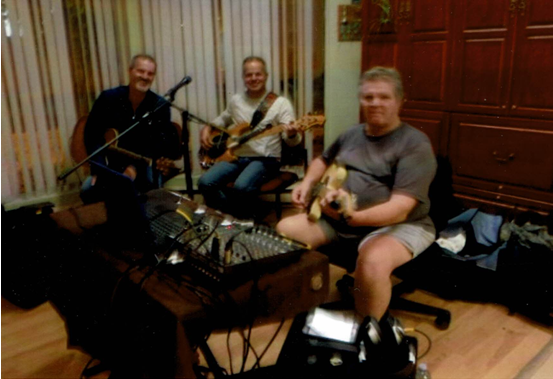 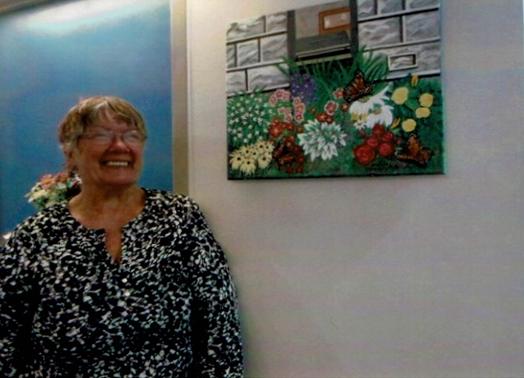 The tenants of Beek Lindsay Seniors Residence have been busy lately.

Recently, they had a BBQ. Hot Dogs! Hamburgers! Salads galore and delicious desserts. Organizers were Pat Marchand, Dorenda Dorey and her 103 year young Mother, Edna. They had a big crowd. No wonder, with all that nice food to eat already prepared and no dishes to do. Sounds like a great time.

During the week before Thanksgiving Beek Lindsay residents initiated their annual Thanksgiving Food Drive to benefit The Food Cupboard at Trinity Anglican Church.

In the photo, Claudette Quesnel is placing some food in the box. Claudette gathered the donated goods each evening and put them away for the night. Thank you. Claudette has been a wonderful resident who helps with a lot of activities around the residence. She is an amazing lady and a very caring person. Kudos, Claudette.

And a big thank you to all the generous residents who donated to the Food Drive. Photo courtesy of Bob Katz.

And during that week the caterers, “Catering 2 Kidz”, cooked a scrumptious turkey dinner with stuffing, vegetables, coleslaw and desserts for the residents. Again, the tenants could sit down and enjoy a wonderful meal already for them to eat. Everyone said it was very delicious.

And, to top it all off, Ed Lauzon treated the residents to another great concert. He was accompanied by his two sons, Adam and Ed Jr. It was a cool fall evening, so what better to do than enjoy some wonderful music in a cozy lounge.

The concert started off on a smooth romantic note with George Strait’s, “Can’t Help Falling in Love With You” and “I Just Want to Dance With You.” When Ed played some more of our favourites like “Under The Boardwalk” by the Drifters, people started getting up dancing. That was pretty much what a lot of them did all evening. Later some of the people were up doing some line dancing which was fun to watch. Edna Dorey, 103, was up dancing too. Fun to watch her because she sure can dance.

Ed played lots of songs we like to listen to, sing to and dance to such as: The Wonderer, Little Runaway, Earth Angel, Brown Eyed Girl, Rolling on the River, When My Blue Moon Turns to Gold Again, Love Potion Number Nine, Good Morning America, The Beat Goes On, Unchained Melody, Achy Breaky Heart and Sunday Morning Coming Down, among many others. It was a two and a half hour concert and really wonderful for all of us attending. Ed also sang a couple of humorous songs he had written which was fun. His son Ed Jr. sang a few solos which was a big treat also.

In this photo are left to right Adam, Ed. Jr. and Ed. Handsome guys, eh?

Ed, Adam and Ed. Jr. – thank you so much for taking the time to give us all attending your concert a great evening of fun and music. It was really appreciated. Kudos.

Claude McIntosh’s interesting column, “Mac’s Musings” of Oct. 9th in the Seaway News, brought back some memories of the days when the strap was used in schools. I was really surprised to read in his article that the strap wasn’t abolished until 1984 by the Supreme Court of Canada.

One day a bunch of us who had been together the day before were called into the principal’s office. I was about 7 or 8 and had been with about 5 others, two were a bit older. The principal said that the two older ones, unknown to the rest of us, had gotten into, what I will call, some naughty behaviour. They got the strap on their hands in front of the rest of us. Ouch for sure !! Guess it was to be a lesson for all of us to behave. It frightened and confused me as a very young child. I never forgot it.

The article also mentions having to write out , “I will behave in class”. I do have to admit that in high school I did have to write out 100 times, “I will not talk in class” more than once . Also, Keith Girard, our Music Instructor, made me stand out in the hall for the rest of a music class for laughing. Ron “Suitcase Simpson”, a drummer in our band, had been acting up a bit and had made some of us giggle. In Latin class, the teacher, Emily McInnis, chastised me for laughing also in class. Another classmate, John St. John who was a practical joker, pulled out a big cloth like a table cloth in class one day and used it like a hanky to very loudly blow his nose. It was very funny. He did it on purpose to make us laugh. Emily told me that I was never going to be a scholar like my sister Alberta. She didn’t chastise John though, just me for laughing at him.

Oh well, those were
the days!!

A reader sent in this wonderful photo of his cat Bandit who loves to sit in the bathroom sink. So cute. Thank you.

While a friend and I were eating some scrumptious Laura Secord chocolate ice cream cones at the Cornwall Square the other day and watching all the cute little babes go by in strollers, my friend mentioned the old days when we used to nip off the bottom of the cone and suck the ice cream out. Why in the world did we do that??? Then we had to eat it fast or it would dribble down on our clothes. Kids, eh???

Local artist Brenda has painted another gorgeous picture. She said she painted it because she wanted to get more practice painting bricks on a building. This particular one had flowers around the outside so she added them for an interesting contrast of mortar, bricks and beautiful nature. Thanks Brenda for sharing your lovely painting with us.

A friend sent me this article, author unknown about the ‘Green Thing’ of today. I have shortened it. because it is quite long:

One day a young cashier suggested to the much older lady who was checking out at a store, that she should bring in her own grocery bags because plastic bags were not good for the environment. The lady apologized and explained , “We didn’t have this ‘green thing back in my earlier days.”

The young clerk responded, “That is the problem today. Your generation did not care enough to save our environment for future generations.”

The older lady went on to further explain,” Back in my day, grocery stores bagged our groceries in brown paper bags that were reused for numerous things like book covers for our school books. We returned our milk bottles, soda bottles and beer bottles to the store that sent them back to the plant to be washed, sterilized and refilled to be used over again. They were really recycled.

We walked upstairs because there were no escalators in stores and office buildings. We walked to the grocery store and didn’t climb into a 300-horsespower machine every time we had to go two blocks.

We washed the baby’s diapers because we didn’t have the throw away kind. We dried our clothes on a line outside ( even in the winter) or inside, not in an energy-gobbling machine burning up 220 volts. Wind and solar power did dry our clothes back then.

Kids got hand
-me-down clothes from their brothers or sisters.

We had one TV or radio in the house, not a TV in every room. And the TV had a small screen (remember them?), not a screen the size of Montana.

In the kitchen we
blended and stirred by hand because we didn’t have electric machines
to do everything for us.

We packaged a fragile item to send in the mail by using wadded old newspapers to cushion it, not Styrofoam or plastic bubble wrap.

We didn’t fire up an
engine and burn gasoline to just cut the lawn. We used a push mower
that ran on human power.

We exercised by
working so we didn’t have to go to a health club to run treadmills
that operate on electricity.

We refilled writing
pens with ink and replaced a razor blade in a razor instead of
throwing away the whole razor.

Back then, people used the street car or a bus and kids rode their bikes to school or walked instead of turning their moms into a 24hr. taxi service in the family’s SUV or van which cost more than what a whole house did before the ‘green thing.’

We had one electrical outlet in a room, not an entire bank of sockets to power a dozen appliances. We didn’t need a computerized gadget to receive a signal beamed from satellites 23,000 miles out in space to find the nearest burger joint.

But isn’t it sad that the current generation laments how wasteful we old folks were?” And there is a comment about the cash registers which tell the cashiers how much change to give today. In the old days the clerk had to do the math. The last comment is: “We don’t like being old in the first place, so it doesn’t take much to “tick” us off.”

Mildred, the church
gossip and self-appointed monitor of the church morals, kept sticking
her nose in other people’s business.

Several members did
not approve of her activities, but feared her enough to maintain
their silence and distance.

She made a mistake, however, when she accused Frank, a new member, of being an alcoholic after she saw his old pickup parked in front of the town’s only bar one afternoon. She emphatically told Frank ( and several others) that everyone seeing it would know what he was doing.

Frank, a man of few
words, stared at her for a moment and just turned and walked away. He
didn’t explain, defend or deny. He simply did nothing.

Later that evening, Frank quietly parked his pickup in front of Mildred’s house, walked home…and left it there all night.

Have a good week Dawn.