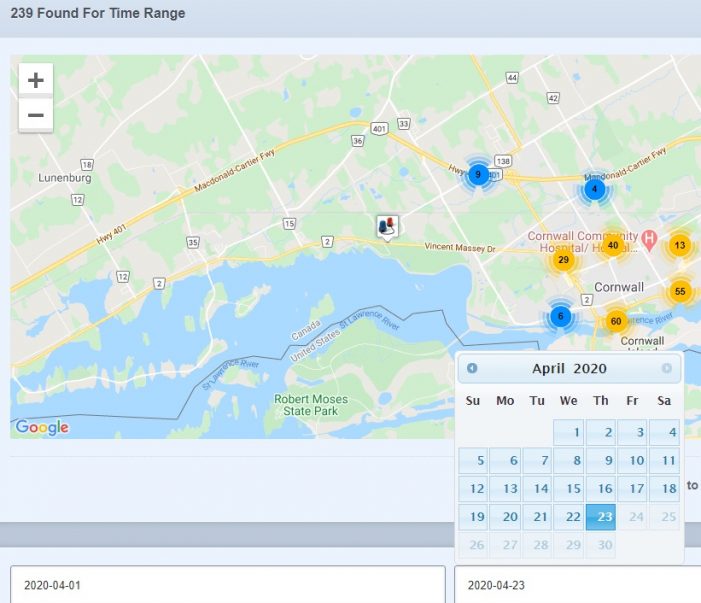 The Cornwall Police service has been disclosing less and less information. Now we can see that we have not been able to access the crime map with any updated info since April 23, 2020.

In their latest media release they only disclose 3 of 138 calls for service for the weekend ending May 11th.

Chief Aikman, Deputy Chief Spowart, and their media people are not responding to emails or calls from this newspaper and have not for several months now.

Does the public deserve to know what’s going on with our police service?

Here is a small breakdown of calls for service from March 23, 2020 to April 23, 2020, the last day they loaded their crime map. They have also stated that crime map info is not conclusive, IE, that there are calls for service that have not been reported there either.

28 calls for MUNICIPAL BY LAWS

35 calls for DISTURB THE PEACE

The only real reason to not disclose a call for service would be to protect a victims identity or impact an ongoing investigation. Clearly most of these calls for service do not fall into either of those categories.

So the big question is why isn’t the Cornwall Police Service under Chief Danny Aikman and Deputy Chief Shawn Spowart hiding the truth from the public? Here are the 3 calls for service disclosed on May 11 from the 138 calls for service counted by the police.

BREAK AND ENTER, ASSAULT WITH A WEAPON, POSSESSION OF A WEAPON FOR A DANGEROUS PURPOSE. MISCHIEF, DISGUISE WITH INTENT, BREACH

Cornwall, ON – Erica Brazeau, 26 of Cornwall was arrested on May 9th, 2020 and charged with break and enter, assault with a weapon, possession of a weapon for a dangerous purpose, disguise with intent, mischief and breach of a release order for communicating with someone she has conditions not to communicate with. It is alleged on May 2nd, 2020 the woman communicated with the persons she has conditions not to communicate with and police were contacted to investigate. It is also alleged on May 9th, 2020 the woman entered their residence without permission while disguising her identity and attempted to strike them with a rake. The woman then damaged several windows and left the scene. Police were contacted and located the woman moments later. She was taken into custody, charged accordingly and held for a bail hearing.

Cornwall, ON – A 19-year-old Cornwall man was arrested on May 10th, 2020 and charged with possession of property obtained by crime, breach of undertaking for failing to notify a change of address and breach of a youth probation order for failing to keep the peace. It is alleged during an investigation information was received that the man was operating a stolen vehicle on April 9th, 2020. He was spotted on May 10th, 2020 by a member of the Cornwall Police Service, taken into custody, charged accordingly and released to appear in court on July 30th, 2020. His name was not released as some of the conditions are stemming from when the man was a youth as per the Youth Criminal Justice Act.

Cornwall, ON – Michael Denneny, 40 was arrested on May 10th, 2020 and charged with fraud under $5000, utter forged documents, possession of property obtained by crime and breach of probation. It is alleged between October, 2019 and February, 2020 the man cashed stolen cheques and police were contacted to investigate. On May 10th, 2020 the man was spotted driving in the area of Eleventh Street and McConnell Avenue by a member of the Cornwall Police Service. He was taken into custody during a traffic stop and charged accordingly. It was also learned the man was wanted on a warrant for an assault charge as well as failing to attend court. He was released to appear in court on August 11th, 2020.

There were 138 calls for service in the City of Cornwall in over the weekend (8am Friday to 8am Monday morning).