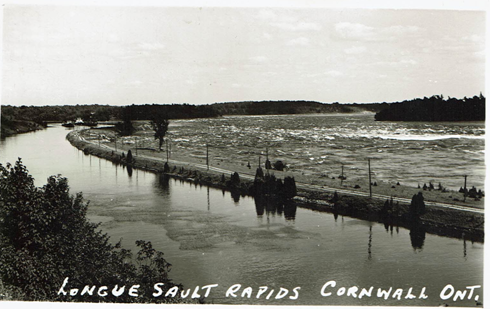 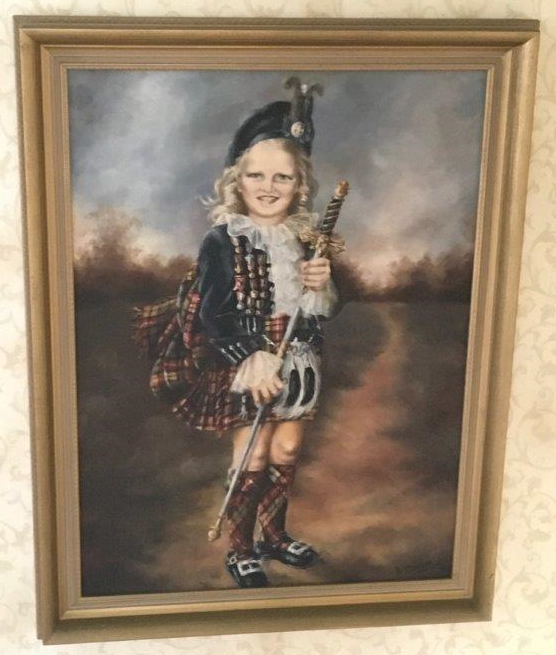 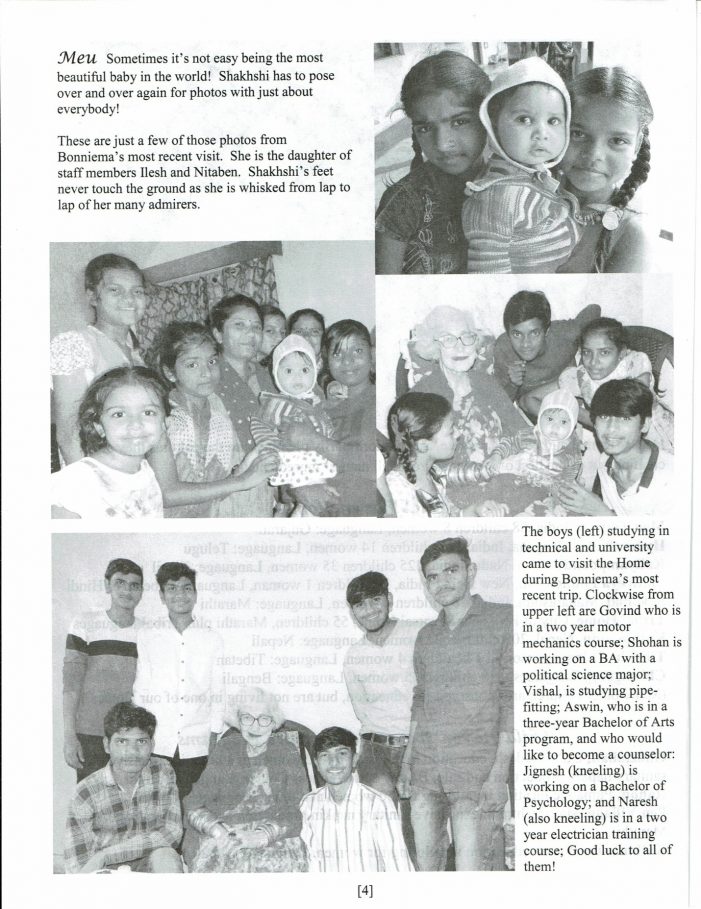 The Longue Sault Rapids were a big attraction when I was young but were lost to the new St. Lawrence Seaway in 1959. I remember going to Sheik’s Island, west of Cornwall, for picnics. We could see all the rapids by looking over a fenced cliff area. The rapids swirled and swirled around. Boats such as The Rapid King, Queen and Prince sailed from Prescott to Montreal through the Rapids. There is lots of interesting information on the websites about the boats.

Imagine the tourist attraction the rapids would be today.

This postcard was in an old family album. On the back it just says’ Made in Canada’, ‘Place Stamp Here’ with some little letters which look like ‘CKF’ and a space for correspondence and address. No date.

A friend of mine, Frances Glass Irwin said that whenever some relatives would come to visit from Montreal, they wanted to go to see the Rapids and her Dad took them to a lookout point (probably on Sheik’s island).

The work on the new St. Lawrence Seaway began in 1954 and took 5 years to complete. The river beds were drained from April 4th, 1957 to December of that year according to one web site. People began to explore the bottom of the rapids area in 1957. I remember being there on the drained river bed with a bunch of kids. One guy found an old bullet. Was he excited!!

This old post card is a nice souvenir of days gone by.

A friend sent me this fun article about the debate of whether the American Medical Association should consider re-opening America:

“The Allergists were in favour of scratching it but the Dermatologists advised not to make any rash moves.

The Gastroenterologists has sort of a gut feeling about it but the Neurologists thought the Administration had a lot of nerve.

Meanwhile, Obstetricians felt certain everyone was labouring under a misconception, while the Ophthalmologists considered the idea short sighted.

Many Pathologists yelled, “Over my dead body!”while the Pediatricians said, ” Oh, grow up!”

Psychiatrists thought the whole idea was madness while the Radiologists could see right through it.

Surgeons decided to wash their hands of it and the Internists claimed it would indeed be a bitter pill to swallow.

The Plastic Surgeons opined that this proposal would “put a whole new face on the matter”.

The Podiatrists thought it was a step forward but the Urologists were pissed off at the whole idea.

Anesthesiologists thought the whole idea was a gas but the lofty Cardiologists didn’t have the heart to say no.

In the end the Proctologists won out, leaving the entire decision to the ***holes in charge.”

Myrna Plumley started dancing at the very young age of five at the Dickson School of Dance in Cornwall. She danced until she was in grade twelve in high school. Myrna learned ballet, tap and highland dancing when she first began her lessons. Later she added toe dancing to the ballet. She remembers for the last couple of recitals she performed in that she and Allan Sullivan did a song and dance routine. It was lots of fun.

Myrna started competing at the Highland Games when she was seven – the first time was in Lachine, PQ. She said that she competed at the first Highland Games in Maxville which she joking adds, was a long time ago. There were five dances for competition – Highland Fling, Sword Dance, Sean Triubhas, Irish Jig and Sailor’s Hornpipe.

Bernice Dickson ran the school in the basement of her house on Fourth Street. She produced an elaborate recital every year. Bernice was a talented artist and dancer. She herself did all the scenery and designed the costumes for her yearly recitals.

Here is a bonnie wee lass. Myrna’s painting was done by Bernice Dickson and was in an art exhibition and then later, hung in the Dickson home. Myrna said that she was 8 or 9 years old in the painting. Bernice and her sister did not want to part with it but at some point after Bernice’s death, her sister Phyllis gave Myrna the painting which she received sometime in the early 2000’s.

Wonderful treasure for Myrna and her family.

Child haven International, a non-profit organization, was founded in 1985 by Fred and Bonnie Cappuchino and Dr. Nat Shah to help orphaned and destitute children and women in need of food, clothing, shelter, health care, education and moral and emotional support. There are 10 projects in 4 countries, Tibet in China, Bangladesh, Nepal and India.

This latest newsletter of CHI has many interesting articles and wonderful photos of children and staff and all their activities. I particularly like this page of items because Bonnie is in them as she visits the Meu home in Gujarat, India. Loved the baby Shakhshi’s photo.

The newsletter always closes with the inspirational poem of Rabindranath Tagore:

” Let me light my lamp, says the star,

And never debate if it will dispel the dark.”

My Tiger cat just celebrated his 17th. birthday on June 23rd. He had some special treats but didn’t seem to care – just ate one , yawned and went back to sleep. That is a cat for you!!! Likes to cuddle up to me and purrs and purrs. Big baby. So cute.

A friend sent in this cute joke :

The couple was 85 years old, and had been married for sixty years. Though not young, they were both in good health, largely due to the wife’s insistance on healthy food and exercise for the last decade. One day their good health didn’t help when they were on a rare vacation and their plane crashed , sending them off to Heaven.

They reached the pearly gates, and St. Peter escorted them inside. He took them to a beautiful mansion, furnished with gold and fine silks, with a fully stocked kitchen and waterfall in the master bath. they gasped in astonishment whe he said, “Welcome to heaven. this is your home now.”

The old man asked Peter how much it was going to cost. “Why nothing. This is your reward in Heaven.”

Next door was a golf course and the old man asked about it. Everything was free including playing every day, a lavish buffet lunch with exotics desserts and free flowing beverages. St. Peter said that was all free for them to enjoy.

The old man looked around and glaced nervously at his wife. He asked St. Peter, “Well, where are the low fat and low cholestrol foods, the decaffeinated tea?”

St. Peter answered, ” that is the best part. You can eat whatever you want. You will never get sick or fat. This is Heaven”.

The old man pushed, “No gym to workout? No testing my sugar or blood pressure?”

The old man glared at his wife and said, “You and your f**in’ bran muffins. We could have been here ten years ago!!”

Brings a tear to your eye, doesn’t it?