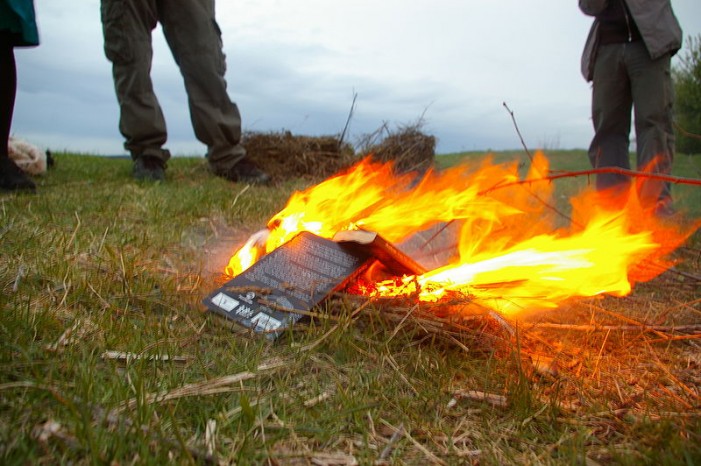 Cornwall ON – Book burning is bad.  Book reading is good, and sadly in today’s world far too few books are being read.   Imagine how much better we’d all be if we’d just read more books?

With the internet and our insane world of course who has time to read a book?  It’s just a luxury now; perhaps something one does while on vacation or at the cottage, or forced to do for school.

A whack job preacher from Florida named Terry Jones, as opposed to one of the members from Monty Python, had this idea of burning the Qur’an as a protest….I’m not sure, perhaps against peace or sanity….

This caused a world wide stir.   Protest in countries tiny.   New travels fast when you’re doing something as bizarre as burning books.  I mean I’m sure there are some books that deserve to be burnt; I’ve had to read a few, but making a statement like that means that you’re expecting what?

Mr. Jones now has had his moment of glory.  He’s gone from obscure zealot to famous less obscure zealot.   His words have actually probably caused danger to people’s lives because in this world there is always someone who’ll do something crazy because you insulted their mothers, or simply said hello.

What are we going to do when there are no books any more?  Burn iPads?  Throw mixed drinks on them?

When I was deciding to write this I was looking for some rhyme or reason.    I’ve read a lot of books.  I’ve studied a lot of history and sadly I see these times turning into the 30’s.   As our financial quagmire starts to spread and deepen it brings out the worst in people.    I know, now some of you are going to start calling me a Socialist, but I think we need to spend more time and resources caring about each other than nipping and coveting.

This morning I had a chat with a man who trades stocks.    He’s not an investor; it’s all about the deal.   He goes from situation to situation trying to manipulate a stock so that he can cash in a days pay or two.    Who’s to judge?  I’m sure he does some fine things with the wealth he creates for himself and his family and the odds are better for him making money doing this than playing a government lottery.  Plus he gets to have those cool and colourful chats on his extra large computer monitor.

In the end people I think the only things that should be burnt at fires are marshmallows and hot dogs on sticks.   There are too many bad chapters of history that involved burnings.    We are in the year 2010.  It’s time to evolve and stop shooting at each other.