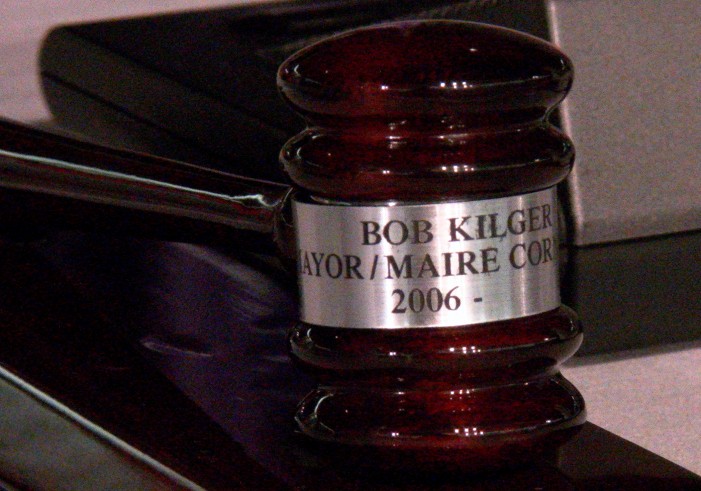 Cornwall ON – The second term for Cornwall Ontario Mayor Robert “Bob” Kilger began last night as he and his council were sworn in at the Civic Complex.

It was a clean event with many pleasant things said about the accomplishments of the last council and the hopes for the future albeit in a different atmosphere financially.

A lot of ground was covered by the ten councilors from the emotional gratitude from Maurice Dupelle, who finally made it to council after all of his trying, to Denis Carr who as the senior man on Council (and probably will be elected for as long as he wishes to remain) shared his thanks with his family and city management who received mountains of praise from our ten newly inaugurated officials.

It was great to see MPP Jim Brownell in attendence.  Missing was area MP Guy Lauzon.   The new mayor of Massena, James Hidy, attended and was given a standing O by Mayor Kilger and the crowd.

Councilor Thibault at the event

Andre Rivette’s emotional thanks to his family.

It should be an interesting four years; especially if the Federal election results in the number one vote getter, Bernadette Clement vacating a seat.

More video to be updated as it becomes available and more can be seen on our YouTube Channel!

5 Responses to "New Cornwall Ontario Mayor and City Council Sworn In – Bob Kilger back at the Helm – VIDEO – December 2, 2010"