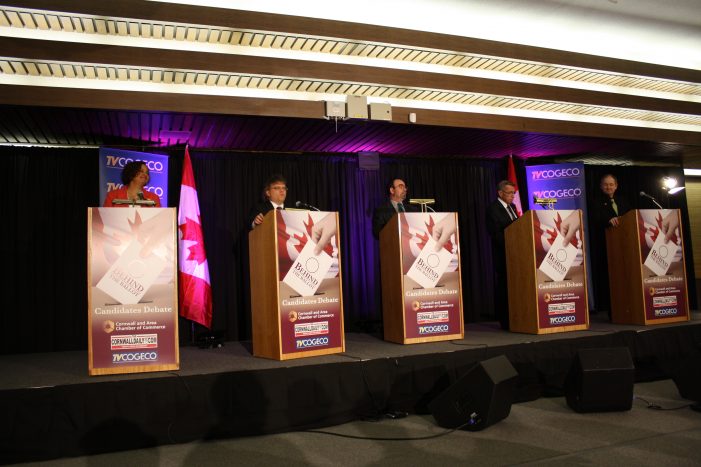 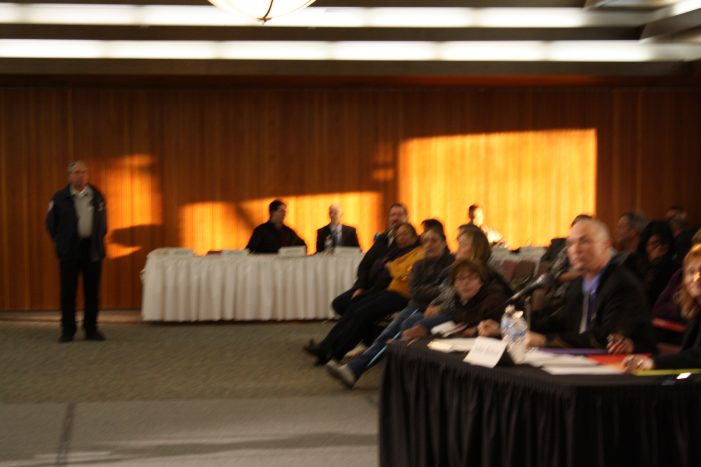 Cornwall ON – Democracy experienced a hiccup last night at the All Candidate Chamber of Commerce debate in Cornwall Ontario.  It seems some members of the chamber are not familiar with the term “Freedom of the Press.”

I was accosted as I entered the Salon in the civic complex by Mike Metcalfe who singled me out with two burly security guards nearby to inform me that I could only cover the event from the Press table.    There was no memo sent out to media prior with any new guidelines or rules.   Cornwall is generally a very mellow media kind of place.  We media all tend to get along and be quite civil; not only to each other, but to those we interview.   The whole experience was odd and shocking.

When I politely challenged him on this he bristled and suggested I could walk around the circumference of the room but not cause any disturbances or go near the stage.

Now after two years of covering events in this town I was shocked as I’d never done any such thing or disturbed any event?  I’ve seen Corus Radio people go right up and stick their microphones at podiums while speeches were being given, but nobody from this newspaper has ever done such a thing?

I took a walk around the room and decided it best simply to leave.   Democracy failed and the only non-Conservative media outlet retreated rather than risk who knows what weirdness?   And frankly as a media person I need to be able to do my job without undue hindrance or partisan interference as do all the media that are present at an event such as this.

Luckily we had someone there, Mr. Reg Coffey,  who was present to cover Mr. Lauzon being soundly defeated by Ms Bernadette Clement, and here is his report.

To start with, I was not supposed to write the coverage of this debate. Jamie was there ready to cover the debate with his usual style but the Chamber put so many restrictions on his movement that he left in frustration. Fortunately I, along with other Cornwall Free News friendly writers, were in the front row of seats. The press priority was given to the companies that are fronted by executive members of the Chamber of Commerce.
The Candidates

The questioning format was changed at the last minute due to outrage from several of the political parties and concerned  voters from “one question, one answer” to a more equitable “one question and everyone gets to answer”. The stage was set with five tall podiums, too tall for Bernadette Clement and a step-up of sorts was requited for her, but there were no seats available for the candidates. This put the Green party candidate, Wyatt Walsh at a distinct disadvantage because of his well know recent foot surgery. The room was staged for coverage by Cogeco and the CFN imitation, cornwall dally, and the rest of the media were relegated to a long table on the far south end of the room with no worthy camera angles. The Conservative supporters were far outnumbered by the other party supports or uncommitted voters which was evident by the responses from the audience during the debate. The questions presented by moderator John Bolton were fair and covered some of the more controversial issues for this riding.

The loudest response from the audience came when Mr. Lauzon tried to explain that the contempt of parliament ruling against the Conservative party was simply a matter of the opposition parties ganging up on them and that it doesn’t really mean anything. The booing drowned him out. The second loudest response came when Mr. Lauzon claimed that he was instrumental in resolving the closing of the port of entry issue.

The candidates pretty much stuck to their written platforms and, to be honest, after attending three of these debates it was a little monotonous.

I do believe that Bernadette Clement gave the best performance of the evening, coming across as sincere, honest and well informed.  Mr. Lauzon struggled to appear credible and was possibly a little pathetic as he pleaded to be re-elected.

Mario Leclerc did not stray far from his written script but he did get some good shots in at Mr. Lauzon.

Mr. Donnelly presented some rather radical ideas, some unpopular, some not so much, and positioned himself as the “protest vote” candidate. Mr. Walsh, while visibly uncomfortable standing, presented himself as a common sense candidate who is willing to stand up in parliament and represent the taxpayers of SD&SG, practically as an independent.

In my view, during this debate, Bernadette Clement showed that she is the most viable candidate to represent Stormont, Dundas and South Glenngary in the next government of the five contenders.

I’d like to thank Reg for stepping up and filling in and apologize to our 42, 384 viewers in the past month for my failing you.   We’re going to wait until after the election to cover this issue with the Chamber of Commerce any further.   In the meanwhile though we have a ton of video and coverage that will be live this weekend from some of the other debate action as well as the candidates on the trail at different events.

I’d also like to ask that everyone embrace their Democratic right to vote!  Get to the polls and bring your friends and family.  Voting is fun!

Democratic Hiccup in Cornwall Ontario as Chamber of Commerce Singles out The Cornwall Free News for Special Harassment at All Candidates Debate. Btw, Bernadette Clement won! April 22, 2011 added by admin on April 22, 2011
View all posts by admin →

23 Responses to "Democratic Hiccup in Cornwall Ontario as Chamber of Commerce Singles out The Cornwall Free News for Special Harassment at All Candidates Debate. Btw, Bernadette Clement won! April 22, 2011"