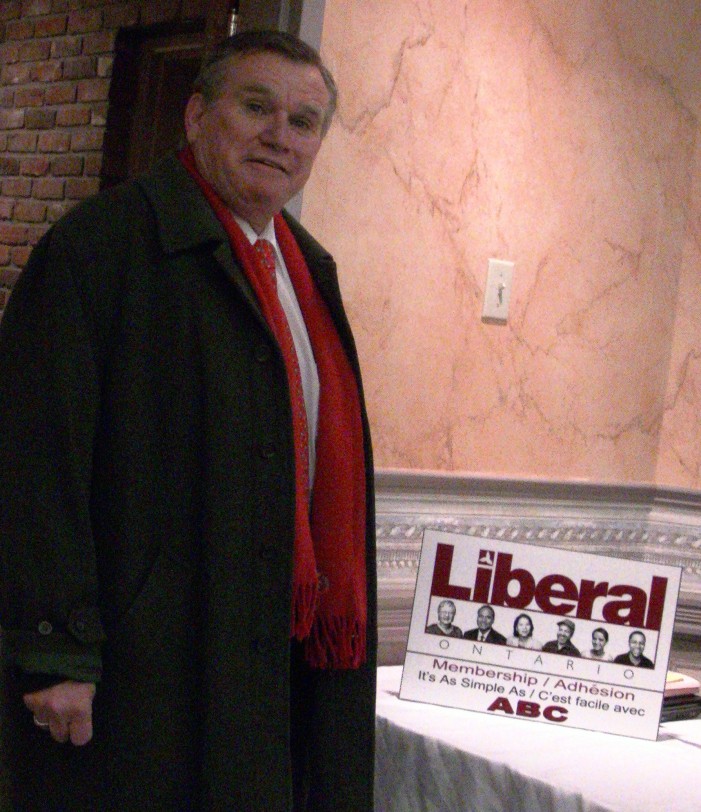 Cornwall ON – Mark A MacDonald rejoiced after winning the Liberal nomination for SD&SG Ontario in the upcoming October Provincial election.   We’ll have full video and photo coverage tomorrow of all the action at the Cornwall Civic complex.

Mr. MacDonald, surrounded by supporters who showed up with red sashes and loudly showed their support, shared his appreciation to all of his supporters and family and congratulated his opponents Pat Finucan and Denis Sabouring before stating that Tuesday he’ll hit the ground running acknowledging that this election will be a brutal fight.

The victory was on the first ballot meaning that Mr. MacDonald had at least 290 of the 579 official votes tallied.   A large number of people were rejected for various reasons.

Mark also talked about the big shoes he’ll have to fill in replacing Jim Brownell, and the challenge he faces in countering the rhetoric being blasted by the Tim Hudak led Progressive Conservatives.

From the local Liberal team:

The nomination meeting to elect a new Liberal candidate in Stormont—Dundas—South Glengarry was held tonight in Cornwall.

We’d like to thank the three candidates who put their names forward: Patrick Finucan, Mark A. MacDonald, and Denis Sabourin.

We are excited to announce Mark A. MacDonald as the new Ontario Liberal candidate for Stormont—Dundas—South Glengarry. As an active community minded person and being a life long resident of Cornwall, I feel that I have a deep understanding of the current issues.

‘ I believe in an Ontario that is worth fighting for and I believe that under the present leadership we are moving in the right direction,” said Mark.

Mark  A. MacDonald has dedicated his life to his community. A graduate of the Ontario Fire College, MacDonald served as Fire Fighter

with Cornwall for 24 years, and his commitment to community safety has earned him the Ontario Medal for Good Citizenship.

Mark MacDonald  served as Councillor for the City of Cornwall from 2003 to 2010. MacDonald has volunteered for many charitable causes.

And from Mark himself:

AFTER A GRUELLING NOMINATION CAMPAIGN IT’S TIME TO “HIT THE ROAD RUNNING”.
“IT’S BEEN A BATTLE AND I COULD NOT HAVE DONE THIS ALONE”  “THERE HAS BEEN A DEDICATED NUMBER OF PEOPLE ON BOARD AND I WILL NOT DISAPPOINT”
I WILL BE OUT “MAIN STREETING” TOMORROW AND LOOK FORWARD TO MEETING AS MANY PEOPLE AS POSSIBLE.    MPP JIM BROWNELL WAS A TIRELESS WORKER AND I INTEND TO FOLLOW IN HIS FOOTSTEPS.

What do you think SD&SG viewers?  You can post your comments below.